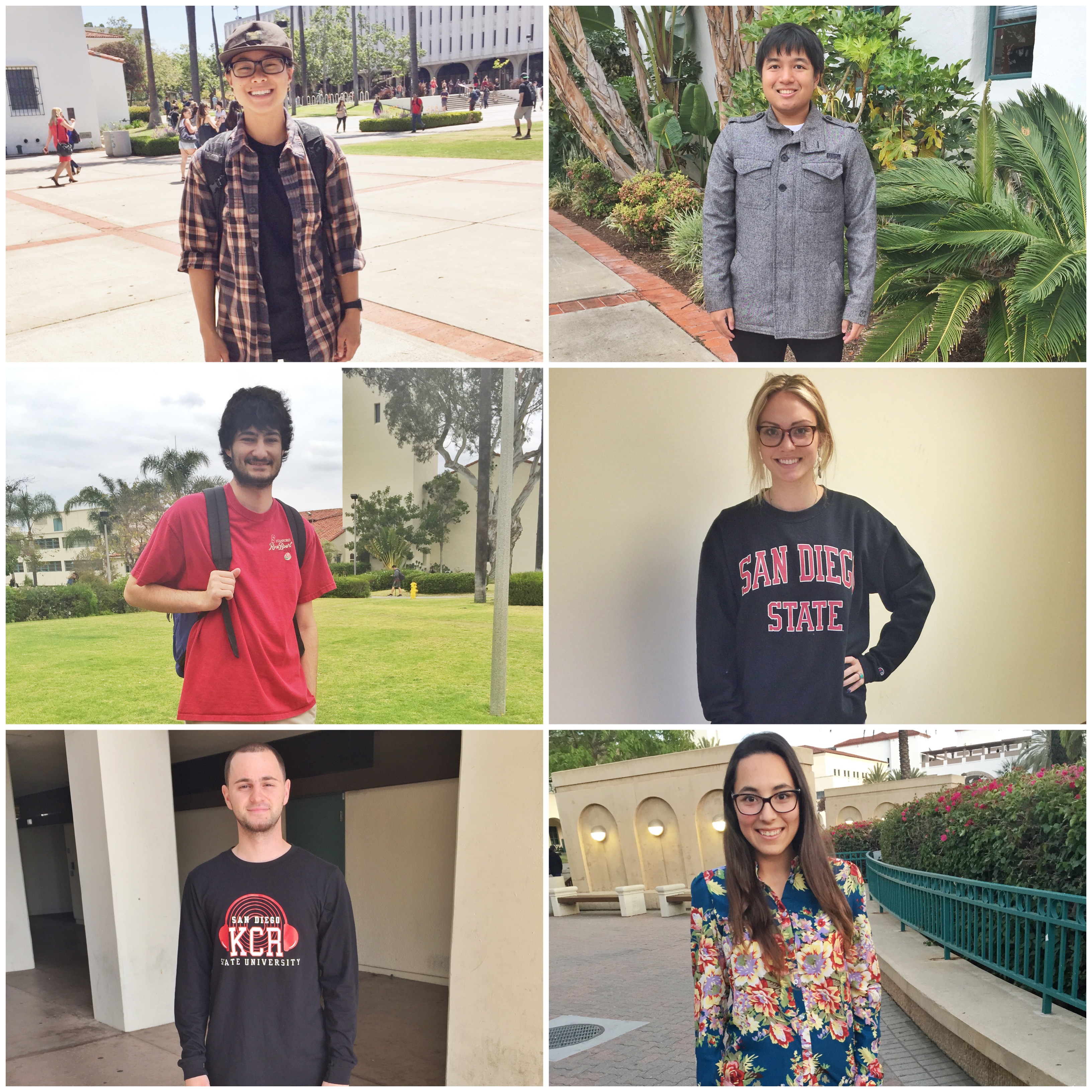 Every San Diego State University student has their own style and it is their way to express individuality. Students may have different backgrounds and interests in clothing, but what they have in common is being an Aztec. Welcome to Fashion of the Week: Aztec Attire. My mission is to promote and show the increasing diversity of this campus.

Welcome back to Fashion of the Week: Aztec Attire! The weather has been quite bipolar lately. This past week has been filled with gloom, heavy winds, rain and then the sun trying to peak through here and there. Rain or shine, Aztecs are still Aztecs. They are known to express their own individual styles contributing to what SDSU is all about: diversity. Let’s begin! Dez is a freshman who usually likes to wear all black. With summer just around the corner, Dez still sees herself wearing the color black. “So you can’t see my sweat,” said Dez.

The shoes you will catch her wearing majority of the time are her black timberlands or hiking boots. An accessory that she always has on is a black watch. As for her hair, she said she is too lazy to fix it for school. She usually throws on a hat and calls it a day.

Her favorite outfit that she has right now is a black utility vest. “It’s pretty cool because it has a bunch of pockets,” said Dez.

Something that she loves about SDSU: “The free water dispensers.” Random fact: “You’ll usually see me carrying around a big water bottle because I get thirsty so often. As a result, I go to the bathroom a lot, but at least my skin thank me for it!”

Summer is approaching and Sherwin expects to wear a lot of simple clothing items such as shirts and shorts. He wears dark colors very often, but wants to expand to other colors.

“I was looking at my closet one day and realized it’s all dark colors,” said Sherwin. He said he would experiment with other colors this summer.

Sherwin likes to wear his Nike SB shoes, but wants to own his first pair of dress shoes that he can wear daily. “They’re nice because they look both casual and formal at the same time,” said Sherwin.

Sherwin usually likes his hair long and only trims it when necessary. He said he used to always have his hair shaved, but realized he liked the longer look better.

Something that he loves about SDSU: The setting of SDSU. “People say SDSU looks old, but it’s traditional. The new buildings are really nice, too!” Random fact: “I run a couple of different blogs. They are doing pretty well. One is music. One is football.”

Cameron’s go-to clothing item for school is pants. “I love wearing shorts though, but I can’t wear them for work,” said Cameron. He works 5 days a week, so you will catch him wearing either jeans or khakis most of the time.

Cameron does not really have a certain hairstyle that he likes to wear for school. “I only get my hair cut a couple times a year,” said Cameron. He does not mind sporting the longhair look.

His favorite outfit is anything comfortable. “I’m not a fashion guy. I go comfort over fashion,” said Cameron.

It gets pretty hot during summer in San Diego, so you will catch Cameron wearing shorts and T-shirts when that time comes up (at least during the days that he is not working since he still has to wear pants for work.)

The top 3 color T-shirts that he wears are:

Cameron said he has a lot of black T-shirts because he is a Giants fan.

Something he loves about SDSU: “I like that you can do your own thing. Not just with the clothes I wear. It’s the opportunity to just do what you like to do and be yourself.” Random fact: “I like deals for clothes! I never spend more than twenty bucks on a clothing item.”

Nancy’s go-to clothing items for school are loose fitting tops. “I like to be comfy, but also not look too sloppy,” said Nancy. She is looking forward to summer because it is her favorite season to dress for. She expects to wear mini dresses, rompers and shorts majority of the time during summer.

When it comes to her go-to shoes for school, Nancy will usually wear converses or sandals. You will catch her with her hair worn down, in a bun or in a ponytail. She said the color she wears the most is black. “But I also like every color,” said Nancy.

Accessories are a must for Nancy. “I like to always wear earrings,” said Nancy. “I have this one necklace I always have on. Rings too. I just like accessories.”

Something she loves about SDSU: “The weather. Being able to wear dresses all the time!” Random Fact: “I am the youngest of 8 kids. I have 6 older brothers and 1 older sister.”

Rafael’s go-to clothing item for school is anything comfortable. “I walk to school, so majority of my stuff is comfort wear,” said Rafael. You will usually catch him wearing shorts and a T-shirt.

There is no specific hairstyle that Rafael has. He said he is an overall simple person. Over summer, he expects to wear a lot of T-shirts and shorts such as cargo shorts.

As for the colors that Rafael wears the most, he said black because he owns a lot of black shirts since he is a Giants fan (Hey, just like Cameron mentioned above! What a coincidence.) “It’s not because I love the color black. It just happened by accident.” He wears a lot of white and neutral shirts as well since it is always hot in San Diego.

Rafael will wear sunglasses if necessary, but for the most part he does not wear any other accessories.

Something he loves about SDSU: “I like the environment and diversity. I can’t really complain with where I’m at.” Jenny’s go-to clothing items for school are anything comfortable. “I like anything decent-looking, but at the same time comfy,” said Jenny.

Her favorite hairstyle that she likes to rock is braids. She said any type of braid, whether that’s a side braid or a simple braid in a ponytail.

Jenny is looking forward to summer since it is her favorite season to dress for. “Its got to be because we live in San Diego,” said Jenny. She expects to wear a lot of shorts, rompers and bathing suits during summer.

Chrissy Teigen is a celebrity style that she admires. “She is very classy, but somewhat simple,” said Jenny.

The color that Jenny loves to wear the most is yellow because it is her favorite color. She also loves to wear sandals as her go-to choice for shoes.

What she loves about SDSU: “I love the diversity.”

Thank you so much for reading this week’s fashion column. Tune in next week for more Aztec Attire.

Come listen to the “It’s Glam Cam” show on KCR College Radio! I am live on air every Thursday from 2-3 P.M. My show is not only about fashion, but I also play the top hits on the billboard and music of all genres. I discuss SDSU events and San Diego events. I have games with guest features, different segments and so much more! Camelle Sison is currently a SDSU journalism senior. She is a prowess at writing and public speaking. Her aspirations of pursuing a career as a news reporter will guide her to fulfill her dream as a global fashion ambassador. Camelle will one day become an inspiration and role model around the world through her lifestyle of fashion, journalism and love. Find your inner GLAM!