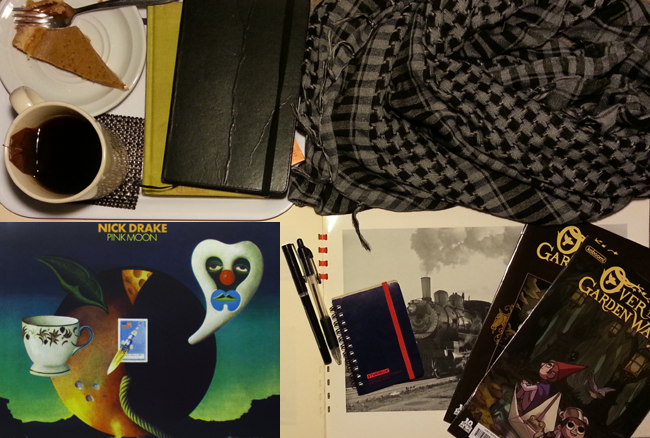 Hey there fellow tourists, looks like its time for another Souvenir of the Week! With Fall fully upon us and daylight savings over, the days are getting to be really short around here and the weather is actually getting a bit chilly. If you’ve been a reader here for a while then you know that these conditions are perfect for folk and folk related souvenirs; with last November’s souvenirs consisting of the folk and folk punk albums of Andrew Jackson Jihad, Paul Baribeau, Against Me!, and Mischief Brew. So naturally I’ve been needing to really scratch this folk shaped itch lately, and luckily I have just the right album to get the job done. Without further ado, here is Nick Drake‘s album Pink Moon.

Nick Drake was an English folk musician who got his start while he was still studying in Cambridge, where he recorded his first demo in his dorm room. Soon after his first release Five Leaves Left came out Drake left Cambridge just 9 months before graduating to focus on music. He would go on to release a second album called Bryter Layter in 1971 and a year later he put out his final and arguably his best album, Pink Moon. Many of you may have actually heard the titular song off of this album back in the 1999 when VW used it in one of their ads and later in 2001 when they included it on a compilation CD of music they used in commercials. The ad is actually well done if you have never seen it, and it is even cited as a watershed moment for music in advertisements so if you want to check it out here is a link. All corporate shilling aside, lets get to the album at hand shall we?

Compared to his two previous albums Pink Moon is a much more organic and simple sound, consisting only of Drake’s soft raspy vocals and his masterful plucking and strumming on his acoustic guitar, with the only exception being on the titular track which features a little bit of piano during the bridge. This stripped down sound really adds to the emotional nature of this album, making for a more pure and direct way for Drake to convey his feelings to listeners. However, don’t let this lack of adornment fool you, although musically this album is pretty straightforward in conveying Drake’s feelings lyrically it is anything but. Known for deeply personal lyrics and using a variety of codes and symbols throughout his music, it isn’t surprising that there isn’t too much of a consensus on what many of the lyrics on Pink Moon mean or what they are referencing. However due to his use of autumnal & foreboding imagery and his detachment from the events described in his songs, in conjunction with the generally melancholic sound his vocals and guitar have, it seems apparent that a major theme throughout this album is melancholy.

Sadly, the world may never know exactly what Drake was attempting to say through these songs. Only two years after the release of Pink Moon Nick Drake died from a medication overdose at the age of 26 in 1974. How much Drake’s Adult Onset Major Depression influenced Pink Moon and how much his death influences listeners’ interpretation of the album are debatable and ultimately unknowable. However one interprets this album, the beauty of Drake’s guitar and vocals are guaranteed. I thoroughly enjoy all of this album for how beautiful it presents these melancholic feelings, just like the beautiful changing of the colors and eventual death of the leaves in Fall. My favorite tracks off of this album are Pink Moon, Things Behind the Sun, Know, Place To Be, and Which Will. If for some reason you need more convincing as to why you should listen to this album, I think it was best put by critic Stephen Holden in Rolling Stone magazine when he wrote “the beauty of Drake’s voice is its own justification. May it become familiar to us all.” Thanks for reading, happy listening, and I’ll see you folks next time.