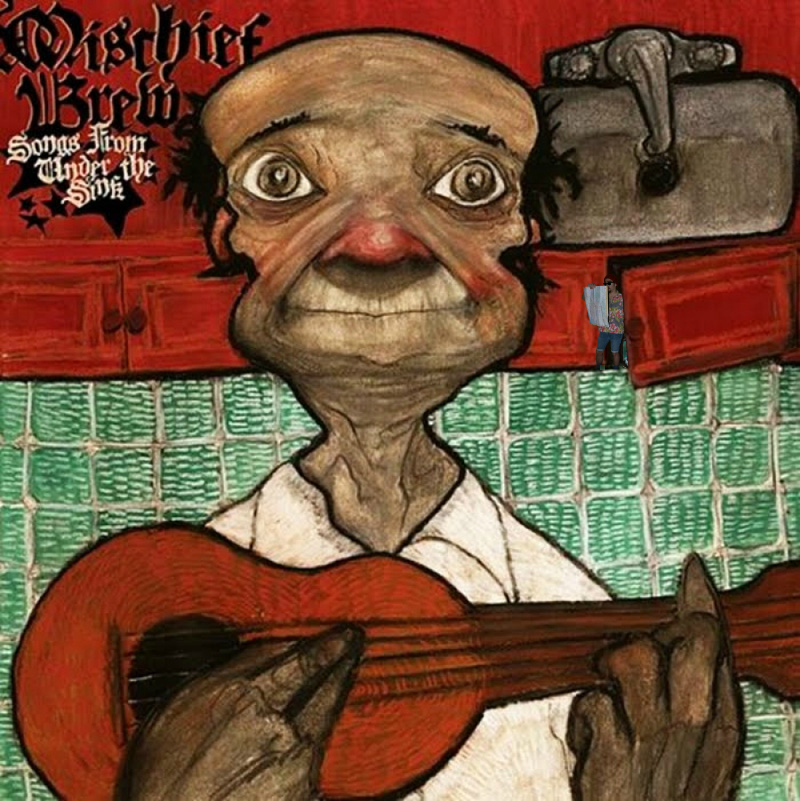 Oh hey there fellow tourists, is it already time for another Souvenir of the Week? I can’t believe that the month is already almost over. Well, since this is going to be the last souvenir of this folk punk filled month, I figured I ought to choose something just right for the occasion. Not only was this souvenir the album that first really got me into the folk punk genre, but it also showcases the very political side of the genre. So it will give you all something to talk about with your families during the coming holidays. Anyways without further ado, this weeks souvenir is the album Songs From Under The Sink by folk punk band Mischief Brew.

Mischief Brew is an anarcho folk punk band from Philadelphia that has been active in one way or another since 2000. Originally starting off as only Erik Petersen on vocals, guitar, and mandolin after his previous punk band The Orphans dissolved in 2000, the band has gained several more members over the years and has put out an impressive amount of work. In the past 14 years they have released 4 full length albums,  2 split albums, 11 Eps/7″s, and have appeared on 19 various compilation albums. Songs From Under The Sink is their second full length album and is made up of songs that were written between 1997 – 2002 but weren’t recorded until 2005 and then released in 2006.

As previously stated this album is very political, being called “a collection of stripped-down protest songs” on the bands bio page of their official website. The album covers topics ranging from police brutality, war mongering, blind patriotism, gentrification, suburbanization, class divisions, problems with the prison system, and much more. Examples of these topics can be found throughout the entire album but some of my favorite tracks that showcase these things are Thanks, Bastards!, Tell Me A Story, and The Dreams Of The Morning.

Even if the political views presented in this album aren’t similar to your own, if you enjoy folk or punk then you will definitely enjoy this album. While listening to tracks like Gimme Coffee Or Death and The Dreams Of The Morning you’ll be sure to catch yourself stomping your feet and maybe even wanting to get up and dance a jig. Other tracks like All Our Comrades, Thanks, Bastards!, and Gratitude And Thanks will surely cause you to bob your head, while other tracks like Love And Rage and A Rebels Romance might even make you want to sing along.

I really love this album and since it was what really got me into folk punk, it will always have a special place in my heart. Some of my favorite tracks are Tell Me A Story, Children Play With Matches, Coffee, God, And Cigarettes, and The Dreams Of The Morning. Hopefully this album won’t stir the pot too much at anyone’s family gatherings during the coming holidays, if anything I hope it gives you some ammunition when someone foolishly keeps on talking about politics instead of passing the gravy.* Anyways, thanks again for reading, happy listening, and I’ll see you folks next time.

* (The Punk Rock Tourist does not in anyway advocate the discussion of political or social issues during a family gathering. Come on don’t be that person, just pass the gravy and enjoy the holidays.)