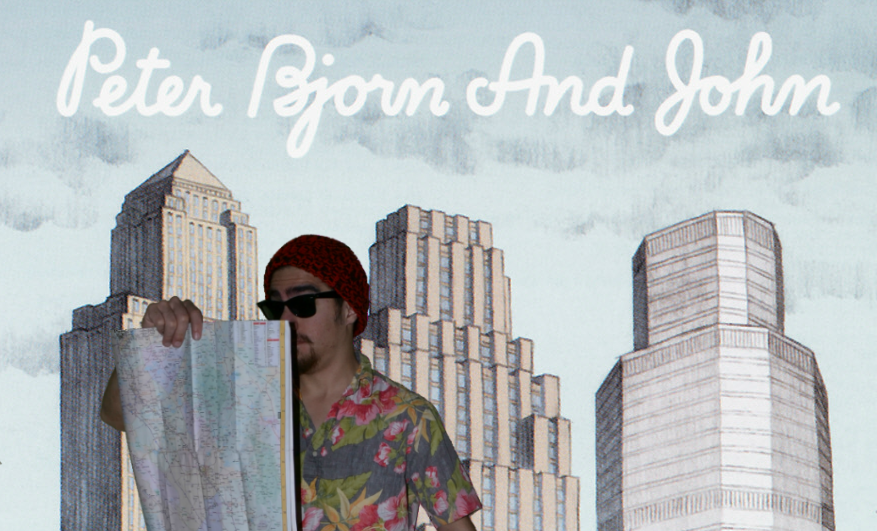 Hey there fellow tourists, it’s about that time again for another Souvenir of the Week! This week I have another rad album for you guys to enjoy and it comes all the way from Sweden! Well, actually only the band comes from Sweden, I’m sure you could just pick this record up in any store in the world. Anyways, the album is called Writer’s Block and is by the indie-pop band Peter Bjorn and John.

Peter Bjorn and John formed in 1999 in Stockholm, Sweden. They put out two albums and a few EPs & singles before they released their most commercially successful album Writer’s Block in 2006 (2007 in the good old US of A). This album is a much more experimental album then their previous two. It makes use of various vocalization techniques, more complex arrangements, and is much less guitar heavy then their previous works.

Although two of the most famous songs off of this album, Young Folks and Objects Of My Affection, are very upbeat, the album overall has a very relaxing and almost calming feel to it. Songs like Up Against The Wall, The Chills, and Lets Call It Off are upbeat and have fun instrumentation, but are songs that are still mellow enough to just lounge around the house. The last two songs on the album, Roll the Credits and Poor Cow, are so relaxing that you could probably fall asleep while listening to them and not be bothered at all.

As said earlier, the instrumentation is very complex and sort of experimental throughout the album. Apparently the song The Chills constantly needs reworking to be performed live and its no wonder why once you give it a listen. The most famous track off of this album, Young Folks, heavily features bongos and whistling. If you listen closely to other songs throughout the album you can hear how the band utilizes vocalizations as a main part of their instrumentation. For example, in the song Roll The Credits you can faintly hear the band using backing vocals “Oooooo,ooooooo” in the beginning and throughout other parts of the song. All of this makes for a great sound throughout the entire album.

It should go without saying that I really enjoy this album a lot. My favorite tracks are: Young Folks, Amsterdam, Up Against The Wall, Let’s Call It Off, Roll The Credits, and Poor Cow. Which I realize now is pretty much the entire album. Oh well, anyways don’t just take my word for it! I highly recommend listening to this while taking a nice drive with the windows down or while taking a nap, preferably outdoors in the grass. Thanks for reading and I’ll see you next week!