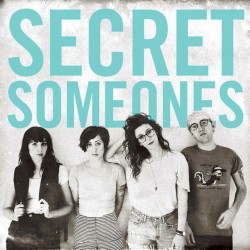 There is a shortage of female fronted bands in the rock scene. Indie rock band Secret Someones is an excellent addition to this underpopulated and underrepresented sect.

The New York based group is fronted by not one  but three female vocalists. Band mates Bess Rogers (guitar), Hannah Winkler (guitar and keyboard), and Lelia Broussard(bass) switch off singing lead, their voices rising, falling, and harmonizing together along with their only male member Zach Jones (drums) in each song.

According to their biography, after backing one another on solo sets, the musicians decided to join forces and make music together. Secret Someones was born and with the release of the EP I Won’t Follow, the band scored a record deal with music label Cherrytree.

There is no one leader in Secret Someones. All four members are featured equally in song, video, and concert.This equal footing is really what makes them stand out.

The transition from one voice to the next adds an interesting variety to their sound. Their voices range from a  clear and pure sound from one, to a more strong and smokey for another,  and a high, sweet tone for the third.

The band’s  best quality  is the smooth vocal harmonies found in songs like Let You Go, I Won’t Follow, and Headfirst.These sweet harmonies can be found on their debut album, released just last month. The record, also called Secret Someones, is made up of 10 songs and six  acoustic versions.

Sadly San Diego isn’t on the tour list. The closest they came was Anaheim. Secret Someones  stopped by Downtown Disney’s House of Blues last Wednesday night. They are currently on tour with labelmates Marianas Trench (who’s newest album was featured on KCR’s blog a couple weeks back).

With just over 1,000 Youtube subscribers and just under 5,000 Facebook followers, the relatively unknown band is gaining recognition and fans as they make their way across the U.S.

Go check out Secret Someones! You’ll be glad you did. Like the bearded man in the suit store commercials says, “I guarantee it.”