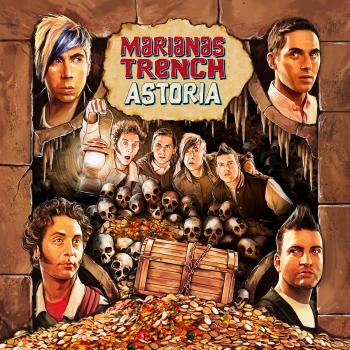 Canadian pop rock band Marianas Trench just released a new album on October 23. Entitled Astoria, the 17-track concept album is inspired by singer/songwriter Josh Ramsay’s childhood love for the Goonies.
Many of the catchy pop ballads and vocal harmonies are complete with orchestral accompaniment. Astoria is very cinematic in nature.  It starts with the titular song from the album, a nearly seven minute track introducing Ramsay’s forceful voice and impressive falsetto.
The album has reoccurring themes throughout, but is varied in design. Song lyrics scattered through the album reference back to old Marianas Trench music.It transitions from high-energy melodies and upbeat songs like Burning Up and Shut Up and Kiss Me to soft and insistent tunes like the ukulele driven Dearly Departed and lovelorn Wildfire.
Although there were a few EPs and successful singles in between then and now, the last time Marianas Trench released a full length album was  November of 2011.
In the making of Astoria video Ramsay explained to fans how hard it was finding new inspiration following his success with Call Me Maybe.Yes, that is a reference to the Carly Rae Jepson song. Ramsay was a major key in her success. He helped write the 2013 Grammy nominated song.
Ramsay explains that things took a turn.  He and his fiance’s wedding got cancelled and his mother became really sick. He was going through a very dark period. Ramsay was then hospitalized for pancreatitis and while in the hospital inspiration hit  and he started writing again.
“The whole record fell out of me. I couldn’t get the ideas down fast enough,” he said.  Ramsay  found his creativity and regained  hope. The band converted his apartment into  a studio and threw themselves into making the new record.
The new release is accompanied with a brand new tour. The band will be making their way across the United States on “The Hey You Guys!” tour this month. Southern California fans can catch them live November 11 on Veteran’s Day. They will be playing Downtown Disney’s House of Blues in Anaheim.
Click here to go buy tickets.
Go buy the album too.
Astoria Tracklist:
01. Astoria
02. Burning Up
03. Yesterday
04. One Love
05. August Burns Red
06. This Means War
07. Hospital Bells
08. Dearly Departed
09. Hollywood Renaissance
10. Shut Up and Kiss Me
11. Who Do You Love
12. Never Say Die
13. Wildfire
14. While We’re Young
15. Forget Me Not
16. And Straight On Til Morning
17. End of an Era