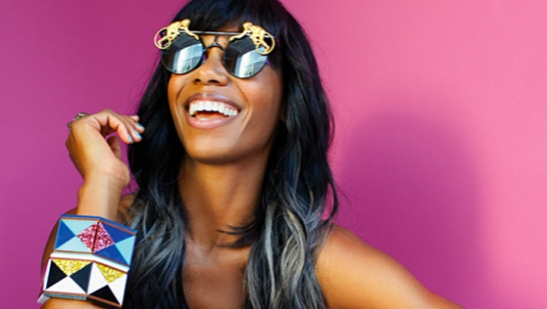 Happy International Women’s Day fellow readers! Hope you are all enjoying this very important day and welcome back to MUSICOLOGIA FEMINISTA. The featured artist this week is just as beautiful as the day itself. Santi White, better known by her stage name Santigold, is an American  musician and producer from the East Coast. As an artists Santigold has worked hard to establish herself in the increasingly difficult music industry as an artist who makes music with an unidentifiable genre. Let’s begin

Santigold attended private liberal arts college Wesleyan University where she double majored in music and African American Studies. Her music career began in 2001 as  lead singer of punk rock band Stiffed. The band released two albums, Sex Sells in 2003 and Burned Again in 2005, both of which were produced by Bad Brains bassist Darryl Jenifer. The band broke up in 2006 at which time Santigold moved on to her solo career. She actually began her career under the pseudonym Santogold, but changed it in 2009 to Santigold due to a threatening lawsuit. Santigold is most exemplary due to her unique sound. Many compare her to M.I.A., and although I do see that, I still see the uniqueness in Santigold’s music. Her lyrics are remarkably motivating and fun. You can hear the influences in her music refer all the way from 80’s pop and Jazz to reggae and straight up trap music. She tries not to compare herself too much to other artists and I think that adds to her particular sound.

Santigold’s debut album Santogold was released in 2008. The album features a wide array of influences and sounds. It received very positive feedback such as being named #6 on the “Rolling Stone’s Top 50 Albums of 2008″ on  Rolling Stone magazine. A couple of months after Santigold paired up with DJ Diplo and released Top Ranking: A Diplo Dub. The mixtape was released as a free download online and featured remixes of Santigold’s previously recorded music, some of her unreleased music, and remixes of other artists such as The Clash, Three Six Mafia and Bad Brains. Her second debut album Master of My Make-Believe came out in 2012. Part of the album was actually recorded in Jamaica and it features one of her hit singles Disparate Youth (featured below).

February of 2016 Santigold released her new album 99¢. Just to name a few of the influences the album features an array of hip-hop beats, African sounds and highlights heavily on the drums and bass. Her voice jumps from rap in one song  to goth in another. It’s dope, and currently available on iTunes for purchase. In addition to the exciting new music, Santigold will be making a stop at the House of Blues San Diego March 29th for her ‘We Buy Gold Tour’. Tickets are now on sale and can be found through the House of Blues San Diego website.

I will leave you now with a few of my favorite songs off of Santigold’s new album. Enjoy and Happy International Women’s Day!