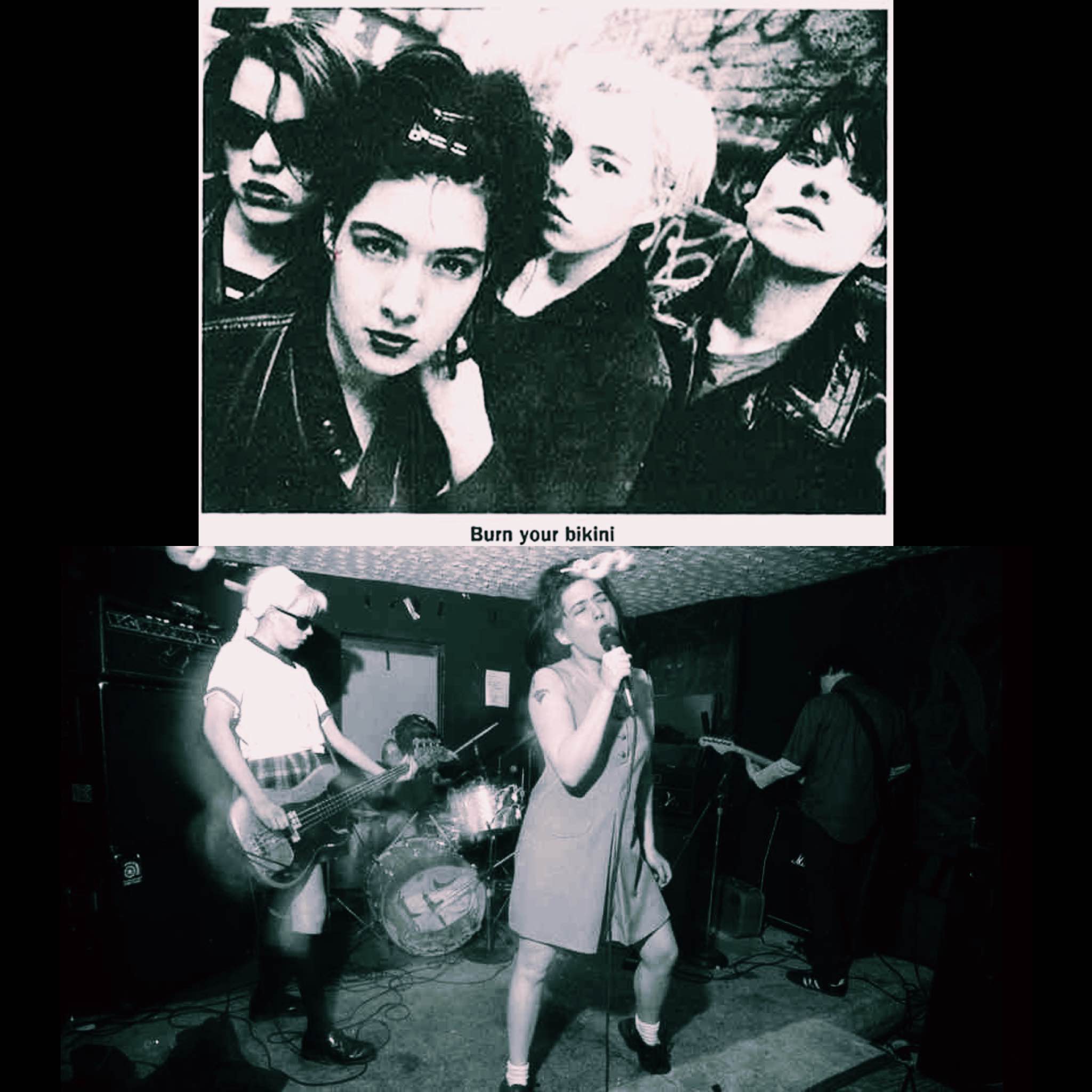 Hey everyone, it’s Aurora! I have decided to get more organized this semester. You are reading MUSICOLOGIA FEMINISTA, a feminist music blog where I will be introducing you to and analyzing certain female artists or bands. I am excited and I hope you are as well.

What better way to start a feminist music blog than with Bikini Kill , am I right? Bikini Kill formed in Olympia, Washington in October of 1990 after founding members Kathleen Hanna (vocals, songwriter), Kathi Wilcox (bass) and Tobi Vail (drums) met at Evergreen State College. Billy Karen was later added to the band as a guitarist.

Apart from their feminist lyrics, the band (especially lead singer Kathleen Hanna) has a connection to the “riot grrrl” movement. Starting in the early 1990’s, this underground hardcore feminist punk rock movement began to gain popularity and attention just as the band Bikini Kill did. As Kathleen began collaborating on zines (Fanzines; cheap magazine production of original texts and images) named “Riot Grrrl”, the genre of the music became easily identified. These zines carried a similar message to the band which called to action feminist activity and female engagement within the punk music scene. At the time this scene was very extremely violent and that made it difficult for women to enjoy sometimes. Not only did other men try to exclude women from the punk scene, they also ruined shows for some girls by being overly violent. Hey, don’t get me wrong, women enjoy getting rowdy at shows just as much as the boys do, but trying to enjoy some music doesn’t mean you have to get bruised ribs or black eyes. Of course these problem are going to arise, especially at crazy shows, but bands like Bikini Kill brought these types of issues to light.

Not only did they bring to light women’s issues in their lyrics, but their shows identified problems around the scene as well. The band would separate their crowd at times by calling , “all girls to the front.” At times Kathleen and other band mates would be physically abused or attacked during shows, but that did not stop them, if anything this showed how prevalent the problem was and still is. Not only was Bikini kill attacked by members of the punk scene, but they were also judged poorly by the media. Rumors and negative media critiques led to the band ceasing all contact with media, a media blackout that many people admired them for.

Although the road was tough, the message was always more important. After four albums and an EP, Bikini Kill broke up in 1997. Kathleen Hanna moved on to make more music and become a well-known feminist activist. Their lyrics continue to be relevant to young and older women today. Whether you are a dedicated fan or are only just discovering Bikini Kill, I hope you enjoy these two songs: