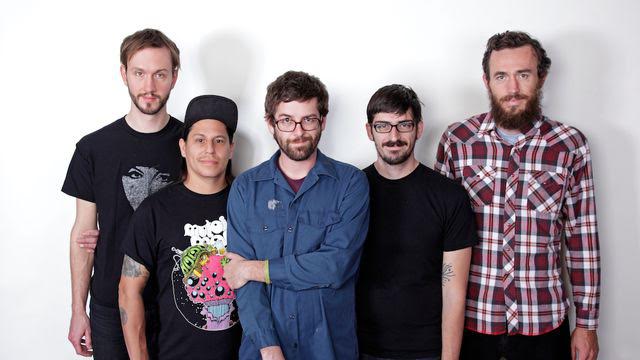 Hey, hi, hello and welcome to another edition of Now Listening with Lala!

To some, Andrew Jackson Jihad is just a funny name for some farm boy that lives in the Midwest. However, it is not just the name of that poor poor boy. Better known as AJJ (formerly Andrew Jackson Jihad, they actually just changed the name last week), they are a wicked folk punk band from Phoenix, Arizona. Formed in 2004, the band encompasses a free-wheeling combination of both Americana and alt-punk sounds.

One of the most notable features of AJJ is the lyricism of their tracks. Known for addressing social anxiety, humanity, politics, and religion, AJJ covers themes that most bands of the punk genre choose to ignore. The unique talking/yelling tones of vocalist Sean Bonnette has also drawn attention to the band. A sound that is not necessarily folk or blues, or pop or punk, AJJ is the kind of band that you cannot completely place into a single genre.

The quality of such a band is far and few between. A highly prolific band in the early years of their formation, AJJ’s most recent album was released in mid 2014. Christmas Island is a fluid and versatile representation of what AJJ has created in the past and (hopefully) a foreshadowing of what is to come in the future. Some personal favorites of mine include Kokopelli Face Tattoo, which is full of fuzzy synth and heavy guitar. In addition, Temple Grandin is a notable track, with vastly different, off-the-cuff acoustic composition. Aside from the most recent album, People Who Can Eat People are the Luckiest People in the World is a wonderfully accurate representation of all that AJJ has been and can be.

AJJ just played a show last weekend at the North Park Observatory along with Joyce Manor (One of my all time favorites EVER). The show was, for lack of a better term, OFF THE CHAIN. The precision of AJJ was impeccable and I had trouble telling whether I was listening to a recorded album or not. The powerful lyrics of their tracks allowed for quite a performance, and while sorta dorky dudes, they were definitely rockstars that night. As usual, Joyce Manor gave an intensely awesome and fun performance as well.

Listen to some of the new and best of AJJ below! ❃