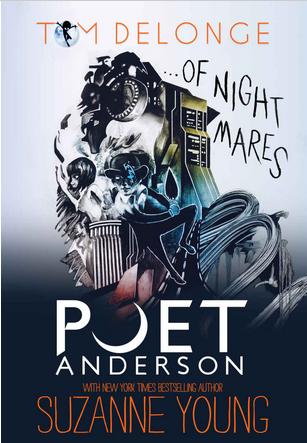 Former Blink 182 front man Tom Delonge has added author to his repertoire.  Last week he released his first novel entitled Poet Anderson …Of Nightmares. The book was co-written by New York Times best selling author Suzanne Young (The Program, The Treatment). The new book is just one piece of a much larger transmedia project envisioned by Delonge.

The Sci-Fi book has a distinctly dystopian setting. It centers on two orphaned brothers, Alan and Jonas, who are both Lucid Dreamers. When Alan falls into a coma, Jonas enters the dream world on a mission to pull his brother out. Along the way he  meets a Dream Walker that helps him to navigate the dark dream world and  the  nightmarish creatures that inhabit it.
The Angels & Airwaves lead singer  is experimenting with the converging mediums. The Poet Anderson  story spans multiple platforms. Delonge’s latest music with band Angels & Airwaves  is a tie-in with the Poet Anderson project. Released in December, 2014, their album, entitled The Dream Walker, coincided with the release of Delonge’s short film Poet Anderson: The Dream Walker. This short film is what originated the series. A comic book prequel to the film was the next to be released.
Delonge’s story vision has been realized through music, film, comic books, and now a novel. It is not over yet. Poet Anderson …of Nightmares  is only part one of what is planned to be a three book trilogy. Angels and Airwaves  is set to release new music to accompany each piece of the trilogy.
Delonge may have parted ways with Blink 182, but he is busier than ever. Keep your head up for more music from Angels & Airwaves and more Poet Anderson cross media adventures coming soon.
You can buy Poet Anderson …of Nightmares on Amazon for $13.99:
http://www.amazon.com/Poet-Anderson-Nightmares-Tom-DeLonge/dp/194327200X
If you’re one of those anti-Amazon people, then you can support a bookstore for 11 cents more and get it here:
http://www.barnesandnoble.com/w/poet-anderson-of-nightmares-tom-delonge/1122015547