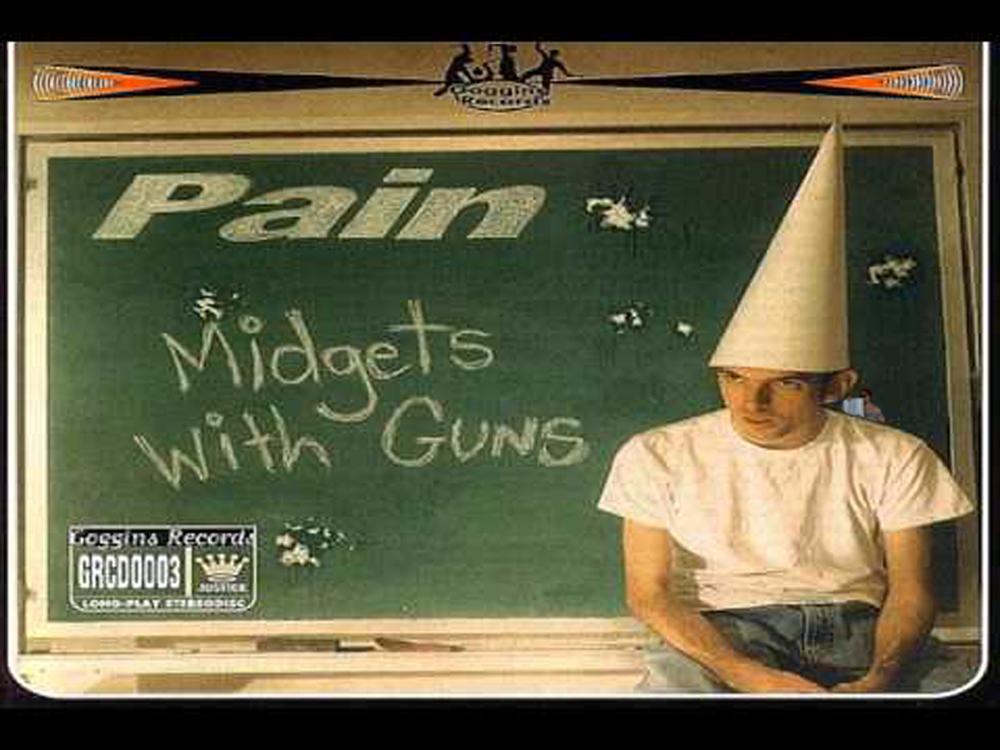 Hey there fellow tourists! I hope all is well, especially for those of you who are now observing Daylight Saving Time, hopefully the loss of an hour of sleep wasn’t too harsh on anyone. Although I can’t give you an extra hour of sleep tonight, I can give you a pretty good Souvenir of the Week so why don’t I do that now! This week’s souvenir is the album Midgets With Guns by the punk band Pain.

Not to be confused with the Swedish industrial metal group of the same name, Pain was a punk band from Mobile and Tuscaloosa Alabama. Although only active for about five to six years they released five studio albums, four singles, and one album of live radio recordings. Also their song Jabberjaw (Running Underwater) from their Jabberjaw EP was featured in one of Cartoon Network’s Groovies called “Jabber Jaw,” so if you watched that station in the early 2000s then you might already be familiar with this band without even being aware of it.

This weeks souvenir, Midgets With Guns, was the second album they released, having come out  back in 1996, and is personally my favorite out of all of their work. The instrumentation, the lyrics, and the variety of sounds presented through out this album make for a really great and fun listening experience.

One of my favorite things about Pain and specifically this album, is their use of brass instruments. Instead of feeling like they are overused the horns in Pain are used just right. Not enough to become the main focus of the song and tiring, but also enough to where you aren’t wishing for more. The horn sections of songs have a lot of impact but aren’t overpowering, they still fit perfectly with the other instruments to form a collectively great sound. The rest of the instrumentation throughout this album is great as well, the drums are heavy hitting, the guitar is fast and powerful, the bass really grooves, and the keyboard adds a great sense of levity and fun. Some examples of the band’s great usage of these instruments can be found in the tracks Midgets With Guns, Square Pegs, Fight, and Adam’s Apple.

The lyrics of this album come in at a close second to the instrumentation of this album. The songs of this album cover a variety of topics, from why the band is called Pain, to love songs, the merits of fighting, and even the story of a brother’s quest to avenge his murdered brother. Some of my favorite examples of the cleverness and how fun these lyrics are can be found in the tracks Chuck Al Hashib, Midgets With Guns, and Grudge.

The excellent instrumentation and clever lyrics both contribute to the great variety of sounds found throughout this album. While tracks like Milk and Fight have a hardcore, even a bit of trash, sound to them there are the track Midgets With Guns has a very latin/samba inspired sound. I will admit that there are times when the variety of sounds presented in this album don’t perfectly work together to create an overall cohesive sound. However, this album doesn’t need to have a defined and cohesive sound because it still sounds great and its overall upbeat nature makes it a fun listen.

My favorite tracks off of this album are Square Pegs, Fight, Midgets With Guns, Grudge, Chuck Al Hashib, and Derision. With Spring starting in a little under two weeks from now this album should be great way to start enjoying the end of this cold Winter, I know I’ll be listening to it while enjoying longer days here in sunny southern California. Anyways, thanks for reading and I’ll see all of you next time!