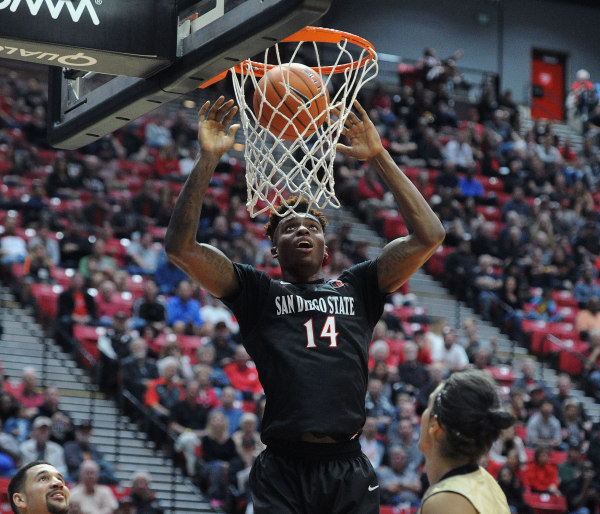 Kell shot 7-10 from the field en route to a 19-point performance that included six rebounds, four assists, and an emphatic block.

SDSU pressured the Hawks into poor shot selections all night because of their strong, aggressive defense, forcing SD Christian to convert on just 32.3 percent of their shots from the field and commit 17 turnovers.

A strong overall performance was just what SDSU head coach Steve Fisher wanted tonight to get the spotlight off of his team’s embarrassing 69-48 loss against Gonzaga on Monday. With the win, SDSU has now won six consecutive games coming after a loss.

“I told them at halftime that it reminded me of my third hour gym class when I was teaching at Rich East High School on kickball and one young freshman said, ‘Coach, this is forced fun,’ I said, ‘It looks like it is forced fun,’” Fisher said. “I think you are feeling sorry for yourself about the whooping we took on Monday and you can’t do that. And I thought the second-half we played with – we were far from perfect. But I liked our pop in our step and we played with a little more ‘I’m really glad to be here,’ rather than, ‘I have to be here.’”

Sophomore guard Jeremy Hemsley joined his frontcourt teammate in the fun on offense, shooting 9-12 from the field for 23 points. His offensive prowess was backed by his ability from behind the arc, as he saw three of his four boundary shots find the bottom of the net.

“(Sophomore guard Jeremy Hemsley) is phenomenal,” Mendez said. “We tried to box him in in transition, and even with us thinking about him he still was able to get into the hole plenty of times. He did a great job.”

Sophomore forward Malik Pope (knee) and junior forward Matt Shrigley (ankle) both at out of the matchup because of injuries, leaving the door open for the Aztecs’ bench to highlight the scoreboard.

“I don’t know, maybe we just have a dark cloud over our heads,” Allen said in reference to the team’s injuries. “We got Sergio (Ibarra), he is a solid (athletic) trainer, and hopefully they get all the injured players back.”

Despite the injuries, Allen and company still found a way to dominate their opponent on both sides of the court, sending Aztec fans out of Viejas Arena on a high note. Their win is a step in the right direction and just a glimpse of their potential.

SDSU will hit the road on Monday to square off against No. 25 University of California, Berkeley at the brand new Golden 1 Center in Sacramento, California.

With national attention looming, the Aztecs will look to pull off the upset to add validity to their top-end potential.