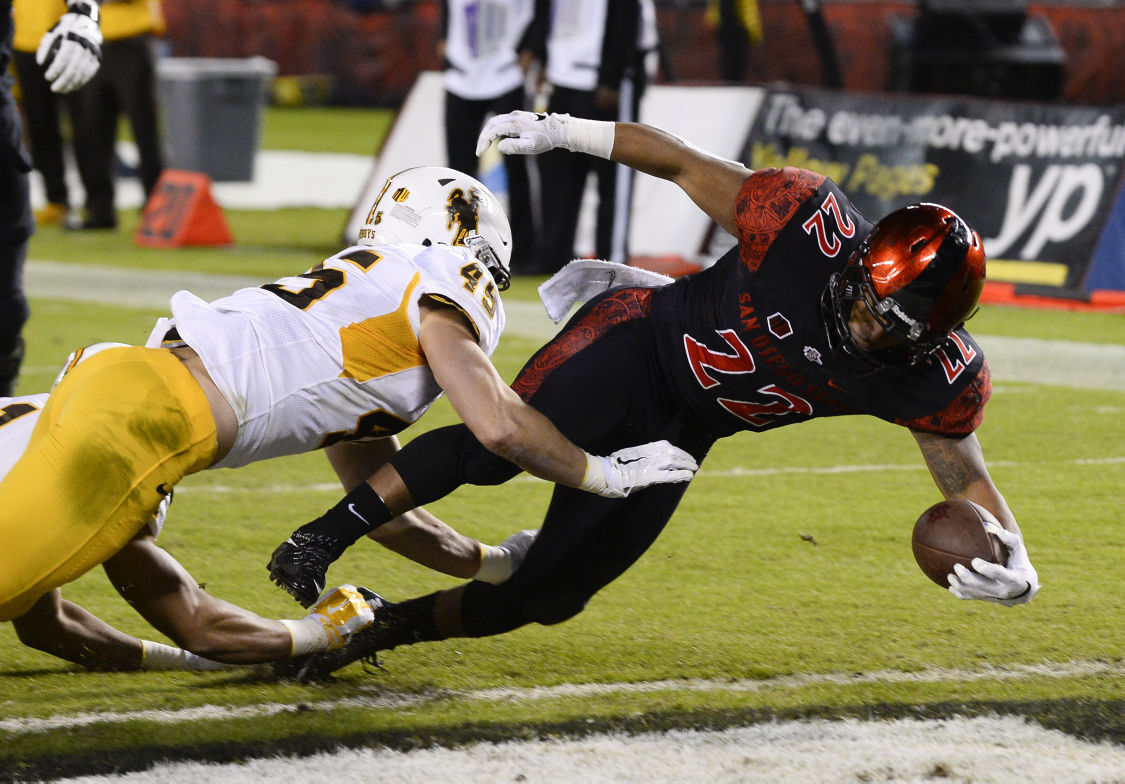 San Diego State football will travel to Laramie, Wyoming this Saturday to take on the University of Wyoming for what will easily be the biggest game in the Mountain West conference this season.

Both sitting on top of the MW conference, SDSU and Wyoming are looking to pull ahead of the pack in their respective divisions this season, for both teams have something to prove.

With the Aztecs emerging in the Associated Press Top 25 at No. 24, the Cowboys will look to knock off yet another nationally ranked opponent in front of their home crowd, as they topped No. 22 Boise State University October 29th, 30-28.

With a win in War Memorial Stadium, SDSU will be one step closer to solidifying home field advantage in the MW championship game and reaching a New Year’s Six bowl.

SDSU possesses a red hot defense that has only given up 42 points during their active six-game winning streak, and their offense has follow suit.

With Heisman candidate Donnel Pumphrey in the backfield, the Aztecs’ offense has put up at least 40 points in their last four games.

Though seeing a number before their team’s name is always exciting, SDSU football fans understand what is at stake come Saturday and are likely already sitting on the edge of their seat.

Since 1977, the Aztecs have lost all three games when nationally ranked, including their loss to the University of South Alabama earlier this season.

Fortunately for the Aztecs, they added a new tip to their spear after their devastating loss to the Jaguars, climbing back into the rankings because of their dominant play on both sides of the ball within their six-game winning streak.

Despite seeing the national spotlight return to his team, SDSU head coach Rocky Long assured the media that their motivation goes beyond a number in front of their name.

“Our team wants to win the conference championship,” Long said. “I’m sure they are happy that we are back in the top 25, even though I told them that it doesn’t matter until the end of the season. Our motivation is that we want to win the rest of the games because there are a lot of good things that can happen after the season if we can win them all. We might get to play in a New Year’s Day bowl game, we’d be the conference champions. There are incentives out there, but the real incentive is that we get to play another football game.”

Surprisingly, Wyoming leads the total series against SDSU 18-17, but the Aztecs have won the last two contests. SDSU dismantled the Cowboys in their most recent affair at home, 38-3.

However, the Cowboys will have a clear advantage in their home stadium because of weather conditions that are relatively unfamiliar to SDSU.

“It will be cold by our standards, but the long-range forecast for Saturday is sunny and 38 degrees or around that and in Laramie, Wyoming, that is not cold, that’s a great day,” Long said. “The biggest factor in any game is not wetness or anything like that, it’s the wind that makes a huge difference in an outcome of the game. The wind is not supposed to very high, so that’s good, but at times it blows very hard in Wyoming and if it blows hard it changes the complexion of the game dramatically.”

Follow @SportsKCR to experience both informational and entertaining coverage of the game come Saturday.

Here at KCR, our Aztec fans don’t miss a beat.