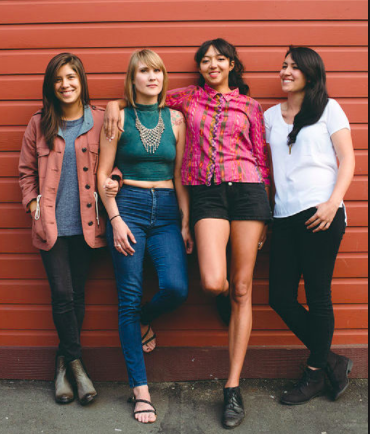 Yo! This week on MUSICOLOGIA FEMINISTA we cover La Luz a surf rock band from Seattle. Who said you had to live by the coast to make good surf music. La Luz has released one LP Damp Face with Burger Records in 2012 and two studio albums with Hardly Art It’s Alive  in 2013 and Weirdo Shrine in 2015. The bands sound is known for their “surf noir” style with layered vocal harmonies.

Their shows are energetic and they are known to have Soul Train-inspired dance contests and crowd surfing. Ayeee!

After being involved in a car accident while on tour in 2013 the band got closer and worked together to bring themselves back up. Fortunately they all only suffered injuries, but all of their instruments and merchandise were ruined. Now the girls are celebrating the successful release and tour for Weirdo Shrine, but at the moment are busy writing new music. Can’t wait to listen to what they have in store next.