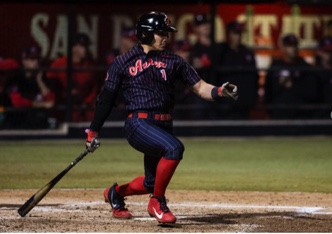 San Diego State Baseball started its 2019 season on a chilly Friday night at Tony Gwynn stadium in front of a crowd of 1,014. The Aztecs faced off against the University of San Francisco Dons for their inaugural game of the season which featured a Mountain West championship ring ceremony.

Defensive baseball was played through the first couple of innings, with only 1 hit registered in the top of the 1st by USF shortstop, Jack Winkler. However, that all changed when the Aztecs collected 2 runs in the bottom of the 3rd inning thanks to centerfielder, Julian Escobedo’s hit to right field that skipped right by the second baseman. Moments later, Catcher Joe Fitzhugh hit a shot into left field that led to Escobedo and Jarvis scoring to make it 4-0 in favor of the Aztecs.

SDSU’s starting pitcher, Junior Logan Boyer, had an impressive night by striking out 10 batters of the 22 he faced. USF batters Jack Winkler & Jonathan Allen had back-to-back home runs off of Boyer in the top 5th inning. SDSU head coach Mark Martinez elected to keep Boyer in the game. Boyer persevered and struck out the last batter to retire the side and headed back to the dugout for the night.

Scoring went back and forth through the 8 innings, with the Dons collecting 1 run and the Aztecs getting 4 more to make it 8-3. Julian Escobedo’s home run and double gave SDSU 3 crucial runs and some breathing room to operate. Relief pitchers Justin Goossens-Brown and Daniel Ritcheson finished things off for the Aztecs on the mound. Only 1 run was allowed in the top of the 9th as USF made a late night comeback. However, the Aztecs were able to  secure the win as Jacob Westerman lined out to 1st base to end the game, 8-4, minutes before rain started to fall. SDSU has now won its season opener 3 years in a row, matching a record set from 2007-2009. Junior, Logan Boyer was credited with the win and improved to 1-0.

The Aztecs lost their first game of the season on Saturday during a game that was initially scheduled for 6 pm, but was moved to 2 pm due to rain in the forecast.

Unlike the previous night where scoring was low at the beginning of the game, hits were a surplus for both the Dons and the Aztecs early. USF scored 3 runs off of Aztec pitcher Brad Wegman with 2 hits while leaving 2 men on base. The Aztecs answered right back in the bottom of the 1st when Julian Escobedo & Casey Schmitt both singled to the left side to score one run each. Freshman first baseman Brian Leonhardt doubled to right field that added 2 more runs to make the score 4-3 after one inning. 4 more runs were added to the score by the Aztecs at the end of the 3rd inning to make it 8-3. True freshman from Simi Valley, California, Jaden Fein batted in one of those runs in the bottom of the 3rd after recording his first career NCAA single in the 2nd inning.

The Dons responded with 2 runs from Nick Yovetich and Brandon Greim. Brad Wegman retired the side and his game was over after throwing 82 pitches in 4 total innings, leaving the score 8-5. SDSU brought in their closer, Casey Schmitt, who serves as both a pitcher and batter/fielder, had 9 saves and 24 strikeouts in the 2018 season for the Aztecs. However, the Dons put on their rally caps and were ready to face down Schmitt, putting up 4 runs during a hit parade that took place in the top of the 9th inning to make the score 9-8.

As only one out stood on the scoreboard, Joe Fitzhugh belted a pitch from Dons pitcher Joey Steele to center field, but was miraculously caught while diving by the Dons player, who then threw to second base to tag Alamillo out who was caught off guard to record a double play that ended the game. USF prevailed and won the game by a score of 9-8 despite being out hit 14-9.

The Aztecs won their second game of opening weekend against University of San Francisco on Saturday night. Julian Escobedo continued with his strong weekend by scoring a run and batting two runs in the bottom of the 7th inning. Aztec second baseman, Jacob Maekawa also ended on a strong note by scoring a run and receiving two hits.

Things were tied up at 3-3 for USF and SDSU at the end of the 6th inning, until the Aztecs scored 3 runs in 7th and never looked back. SDSU starting pitcher Harrison Pyatt played 4 innings and only conceded 4 hits to the Dons. Relief pitcher Christian Winston was credited with the win after coming in during the 7th inning. Pitching was superb this weekend, as SDSU threw 47 strikeouts in 27 innings played.

The Aztecs improved to 2-1 on the season and will look forward to playing U.C. Irvine on Tuesday, February 19th at 6 p.m. pacific time.