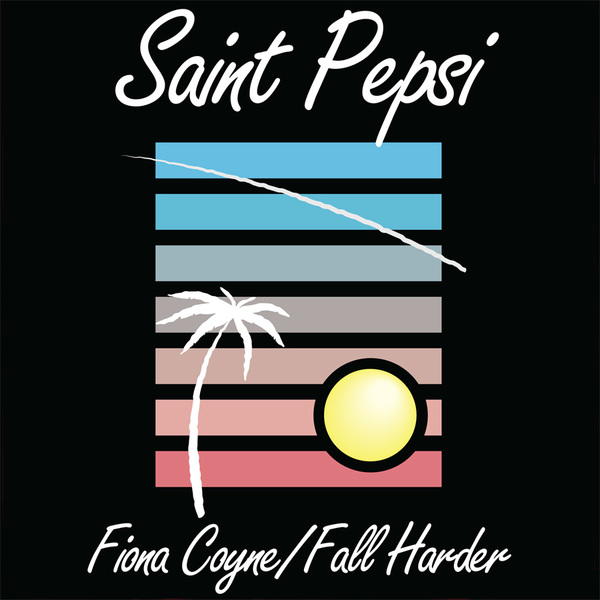 Saint Pepsi-real name Ryan DeRobertis-has made a name for himself the last few years in the “Vaporwave” music scene. What is “Vaporwave” you ask? Remember the sound effects from Windows 98? The music they play when you get put on hold calling your bank? Sega Genesis? Well, some internet wizards have somehow thrown all this stuff in a blender and made some really wicked music. Seminal “Vapor” albums include Macintosh Plus‘ “Floral Shoppe” and Chuck Person‘s “Eccojams Vol. 1“. The artwork for this genre is a surreal take on corporate media from the 80s/90s. There is also an element of anti-capitalism inherent in the genre. By using media from capitalism’s trash can, Vaporwave is a sort of musical “freeganism” that challenges the consumerist definition of art.

DeRobertis is known as one of the most accessible Vapor artists. His 2013 album, Hit Vibes, is often seen as a great entry point into the genre. He has his detractors as well, with critics labling him the “Skrillex of Vaporwave” for his mainstream sound. With his 2014 single, Fiona Coyne/Fall Harder, DeRobertis has moved almost totally away from the calssic “vapor” sound and moved into a more “chillwave” format, closer to labelmate Toro Y Moi. He absolutely kills with these new tracks, and I for one think it is better than anything Toro has put out, and I’d even go so far as to say this single is better than anything Daft Punk has put out since Discovery (yeah, I said it!).

Fiona Coyne is the first single, which is apparently named after a character on some show called DeGrassi. It has really nice Nile Rodgers-esque guitar, while incorporating electronic sequencing and a sun-soaked funky baseline. It was definitely the “Song of the Summer”. The second track-Fall Harder-is very similar, with a more electronic-based sound. The disco guitars are still there, with some synths thrown in for good measure. The drumming is definitely electronic, giving even more of a Daft Punk vibe. Both tracks feature DeRobertis’ on vocals, in contrast to his earlier sample-based recoding. I love his singing style, which is skilled but chill. He hits the notes but remains grounded, not giving off that faux “emotional” vibe we are forced to suffer though these days thanks to Jason Mraz.