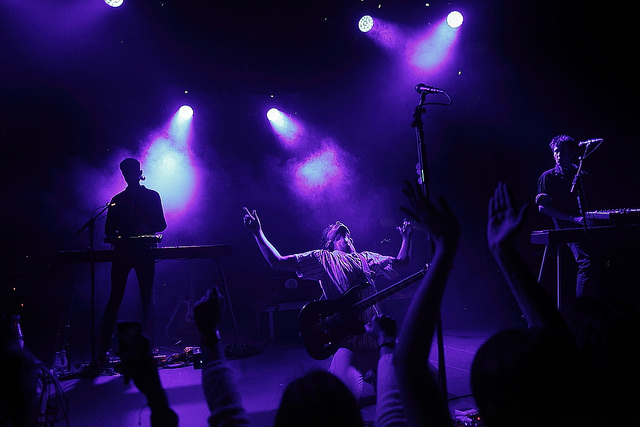 Tuesday, Sept. 19 marked the 2nd time that indie rock band Glass Animals has graced the city of San Diego with their out-of-this-world, psychedelic tunes and deep-rooted pineapple obsession. Their show at Humphreys was part of the band’s 2nd tour for their most recent album, “How to Be a Human Being,” released in August of 2016.

The band’s sophomore album is an attempt at creating a human storybook. Each one of its songs is directly inspired by the lives of people that Dave Bayley (lead singer) met while on tour for “ZABA,” the band’s first album. “How to Be a Human Being” is beautiful, with its colorful celebration of human weirdness, darkness and simplicity. The live version of the album is basically that same celebration, but with an audience of people dressed like pineapples and, in my case, extreme hair flipping and spending all my money on dope merch.

With lyrics such as “pineapples are in my head,” “those peanut butter vibes” and “twitch toes to black mambo,” being sung alongside generous puffs of stage smoke, Lorde-esque dancing and color strobe lights out the wazoo, Glass Animals delivered a unique performance that left me feeling like a trippy alien hooked on pop rocks. All together, Dave Bayley’s I-Can’t-Believe-it’s-not-Butter voice, Drew MacFarlane’s jazzy guitar notes, Edmund Irwin’s funky bass line and Joe Seaward’s superb drum skills created a show that no one could call easy to forget.

Glass Animal’s show radiates a positive, carefree and joyously weird energy that makes you forget about the stresses of life, school and everything in between. Although their setlist drew mainly from their new album, they played a satisfying amount of songs off their first album as well. The audience danced hard to classics such as “Gooey” and “Black Mambo,” but went REALLY crazy over new tunes such as “Other Side of Paradise” and “Youth.” Everybody was either dancing their butts off, trying to catch the flying pineapples or yelling “You’re so hot Dave!” (Dave is the cute frontman).

All in all, Glass Animals at Humphreys was a mind-bending dance party that I would love to attend again and again. I highly recommend their music, their live shows and their dope merch. If you’re at their show next time they come to San Diego, I’ll be that one Mexican cutie dressed as a pineapple.