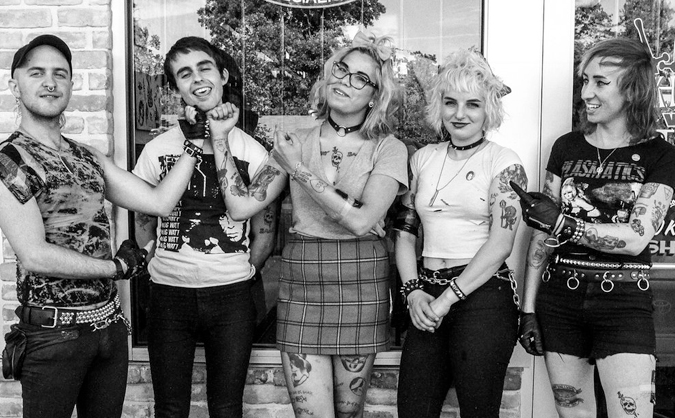 Happy Tuesday pals! Welcome to another week of Now Listening with Lala. Today I’ll be sharing a punk band from Olympia, Washington. These badass chicks break norms and challenge society through their music.

G.L.O.S.S., which stands for Girls Living Outside Society’s Sh*t, is a hardcore band consisting of trans-feminist punk girls who bend gender norms and represent queers from the scene. While most feminists promote peace, G.L.O.S.S. promotes getting a little rowdy in order to get their points across. I know, very punk of them.

Having released two EPs, one in January 2015 and another in June 2016, G.L.O.S.S. has received a lot of recognition for pushing the envelope on what it means to be a girl and a non-binary human in the punk world. Their music is loud and angry, but all with good reason. In today’s age, sometimes screaming and fighting and pushing back is necessary in order to be heard.

Their most recent release, Trans Day of Revenge, is aggressive. Portraying the world as violent, G.L.O.S.S. communicates that the only logical and intelligent response is to be angry. Lyrics spit like rapid fire, and indite societal issues that are not exclusive to the trans and queer world. Calling out cops for their excessive police brutality and standing up for black lives, G.l.O.S.S. maintains their hardcore persona all the while embedding politically complex issues into their emotionally unequivocal music. The sensitive details of their music give occasional rhythm and poetry to their otherwise hardcore d-beat sound.

Unfortunately, upon reaching their newfound fame, G.L.O.S.S. has chosen to break up as a band. After declining an offer for a 50K record deal from the major indie label Epitaph, G.L.O.S.S. realized that their fame was unwanted and simply stressed them out. True to the nature of the punk scene, for G.L.O.S.S., it was not about reaching popularity and making it in the big leagues. The punk they care about was intended to challenge themselves and each other to be better people. Which, they achieved. So with that, G.L.O.S.S. will be no more in a very short time. They will be playing the Not Dead Yet Fest in Toronto in October, and additionally a farewell show somewhere in the Northwest, TBA.

We had fun while they lasted, and G.L.O.S.S. will survive in the world of hardcore and queers for a long long time. Check out some tunes from their demo below, and get your hands on Trans Day of Revenge. ❃