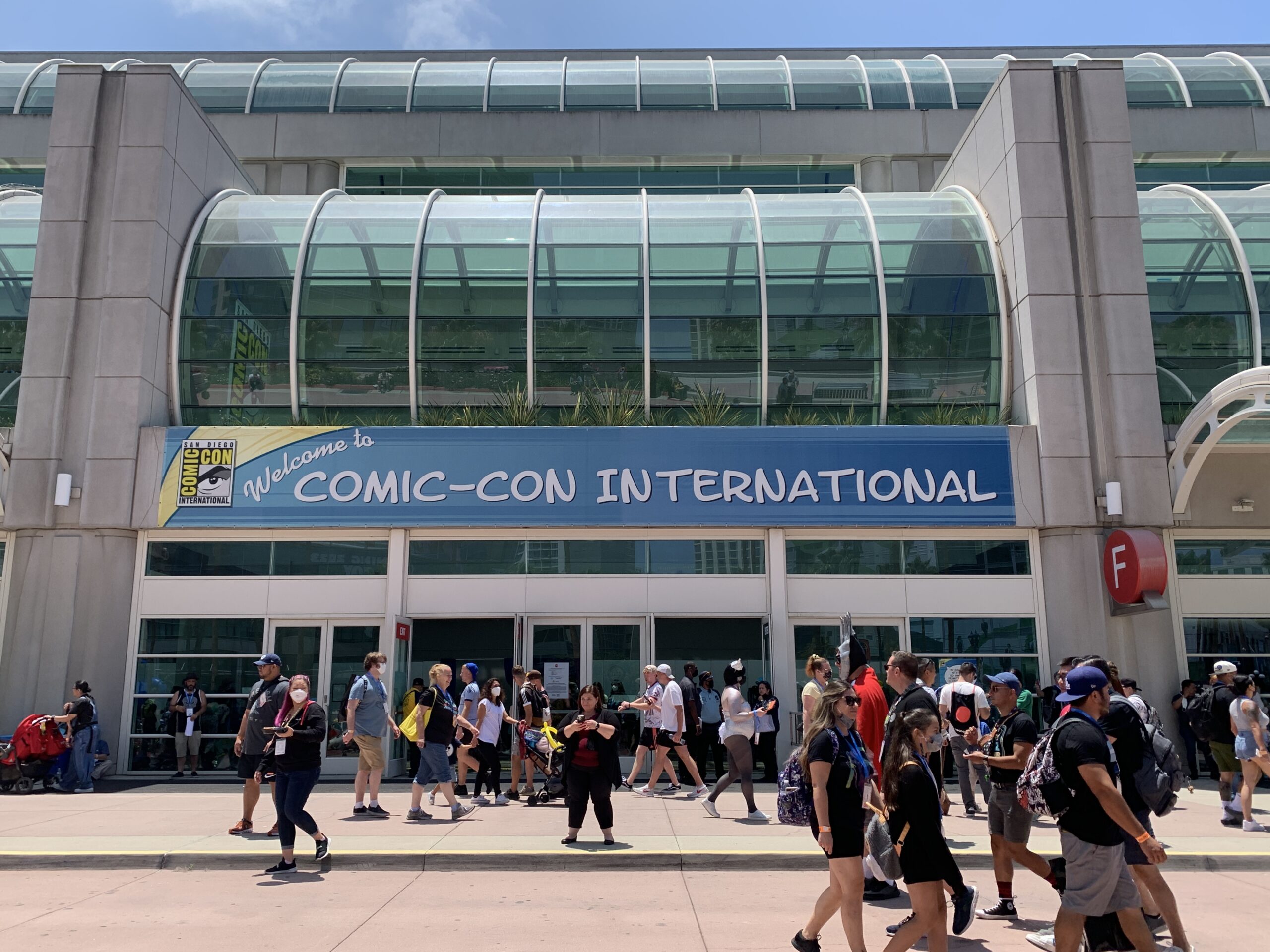 If the previous few articles I have written for KCR haven;t been proof enough, recently I went to Comic Con for the first time. Cue the sound of someone dropping a wine glass. Now that the big twist has been revealed, I have always wanted to go to Comic Con for as long as I can remember. When I applied to try and get press passes for KCR to cover the event, this was a wild shot in the dark. I had no real idea if my letter would even be looked at, let alone accepted. But when I received an email in June that said I have received two press passes for Comic Con, I almost fainted from the excitement. Not only would I get to be living one of my lifelong goals of going to Comic Con, I get to cover it on behalf of my favorite organization on campus!

Not knowing the requirements needed to prepare for this adventure, I was blissfully unaware for the three weeks leading up to Comic Con. Then the second I received an announcement about what panels were going to be held on which days, I began to make a detailed itinerary that outlined the entire time. There were gaps for photos for the articles, there were highlighted panels in order of interest so I could have back up options in case I missed any, even scheduled bathroom breaks. Okay maybe not that last one, but you believed me for a second. All my anticipation funneled into the most focused work I have ever done before. Then it was Wednesday, Preview Night.

I made sure to leave with plenty of time to take the trolley from my apartment to the convention center. It was a pretty stress free trip with the usual experience: I needed to download a new trolley app, someone was listening to music without headphones right next to me, and two homeless people were screaming at each other until one of them pulled out pepper spray and used it in the cart. A standard trolley experience in San Diego.

When my eyes stopped stinging from the expired protective spray, I hopped off the trolley and made my way into the convention center and I was not prepared for what was waiting inside for me. Lines. Lots of people in a massive line. But after 30 minutes, the workers released the stampede of nerds and I made my way into the exhibit hall. I had no idea how big the exhibit hall was; it looked like it was longer than three football fields, easily. There were so many different tables ranging from Netflix to Hulu to Marvel to Blizzard. However, the tables that were the best ones to experience were the independent businesses that make their own nerdy shirts or bags or anything. Their hard work and dedication was so fun to interact with when it came to buying things at the exhibit hall, and I bought way too much.

Now remember how I had a press pass as my badge for Comic Con, well having no previous experience with press I decided to figure out what I could do. On Thursday, I wanted to check out the waiting area for Hall H. That is where the biggest announcements of Comic Con are held. The big announcement for Thursday was the upcoming Dungeons and Dragons movie, so I thought I would see how the line was set up to prepare myself for Saturday; Marvel Studios Panel. Seeing a line that stretched around the block and passed the Marriott across the street, I realized I was probably not getting in. I walked over to a security guard and asked where I could go to get back inside.

He pointed me over to a small line against the wall. There I met a lovely group of people who had covered Comic Con for years as press, hopefully they could explain to me how the convention worked for press. A few moments later, a person from IGN asked me if this was the press line for the D&D movie (shameless plug for my article breaking down this panel, go read it). Before I could respond, the people behind me said yes. I thought this was some cruel joke but after ten minutes passed, I was in Hall H and was about to see the D&D movie panel! So I guess that worked out.

After two more days of fumbling around and finding my way in multiple, insanely fun panels, I made it to the Comics@SDSU panel (shameless plug to read my other article about this panel). After this informative meeting that made me want to stay at SDSU for four more years to major in Comics Studies, it was time for the big Marvel panel. Now one thing to know is that people wait outside Hall H for days to secure a spot for the Marvel panel, so chances of making it into the panel were slim to none. I go to the same line I waited in on Thursday, praying to every god that I could somehow weasel my way into this. After two minutes, the person working the door said I was good to go in. As I was wiping the confetti off my head, this security guard walked me into the hall… and passed the seats… and all the way into the press box. I could literally touch the stage.

Within the press box, there were dozens of press people, some were the same friends I met on Thursday, all waiting to see Marvel since 7 in the morning. I was fortunate enough to only have to wait through two panels (4 hours) before Marvel Studios presented. When the lights dimmed and the Marvel theme started playing, I started to hyperventilate. I could not believe that I was there at that moment, mere feet away from all these celebrities that were portraying my favorite super heroes. I even got a thumbs up from Chris Pratt!

The words that were racing through my head as I tried to recall every minute of Comic Con were never ending. But I didn’t want to focus an entire article on what I did every day, but rather a snippet of the feelings that ran through me throughout the whole convention. I wanted to highlight my favorite part of Comic Con to end with something that I never really felt before this experience.

As I was bumping into all these people, waiting in line for all these panels, freaking out seeing all these celebrities, I was able to look all around me and everyone was feeling the exact same things. It was a foreign concept for me to see so many people proudly displaying what they are passionate about and what they love. What I love. It wasn’t easy being a comic book nerd before all these movies started coming out (yes, I beat you all to it, no need to get upset). It was hard for me to find people who knew or cared about the same things I did, but being able to see people of all different shapes, sizes, backgrounds, it helped me understand that no one is alone in their passions. There are always people out there who love the same things you do, no matter how weird or nerdy they may be. So keep looking for your nerd herd, they are somewhere out there. They are probably just stuck in line at a panel for the next big announcement. Man, there are way too many lines at these conventions.