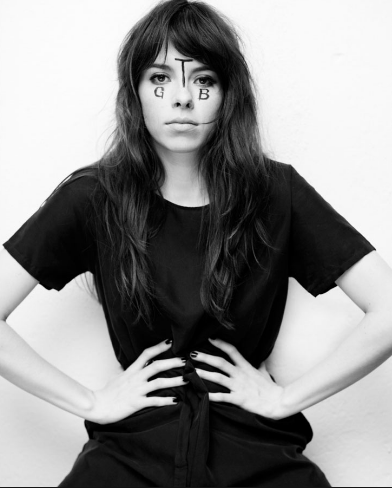 Teresa Suárez, better known by her stage name Teri Gender Bender was born in Denver, Colorado to her Mexican mother and Spanish father. When she was 11 she moved Guadalajara, Mexico with her family. She was made fun of at school for her accent. This motivated her start a garage punk rock band she named Le Butcherettes. After starting the band she moved to Mexico City with the second drummer of Le  Butcherettes Normandi Huexdalf. The band then took another move to San Diego and  finally settled in Los Angeles where she’s still kickin it and collaborating with multiple artists.

Le Butcherettes’ were formed by Teri in 2007 with her lead as a guitarist and  vocals. The band is quite the band to watch live due to Teri’s strong vocals and the bands use of props. There are usually a 1950’s fashion theme with props such as brooms, feather dusters, and bloody aprons to refer to women being slaves. Teri Gender Bender would also use artificial blood, flour, eggs, meat, and a real pig head on stage. The band has released four albums and two EP’s. Down below is the video for My Mallely from their latest album called A Raw Youth released in September 2015.

Teri also sings vocals for the indie electro rock band Bosnian Rainbows. Bosnian Rainbow formed in 2012 in El Paso, Texas. Her band member Omar Rodriguez-Lopez met her when she was playing at a club by his house in Guadalajara. The electricity had gone out in the venue and while none of the other bands wanted to perform, Teri forced her drummer at the time to go on stage to play a set. Omar knew from that point on that he had to make music with her and later invited her to sing for Bosnian Rainbows. Teri’s live performances are often compared to Björk, Siouxsie Sioux, and Karen O.

At 27 Teri Gender Bender seems to be only getting started on her music career. She has many plans and will hopefully be able to use her bilingual gift to make a record in Spanish.