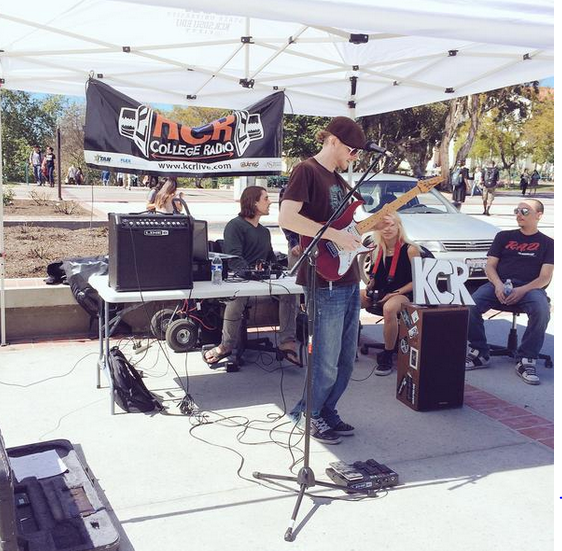 Welcome to another round of KCR College Radio Turn Ups at San Diego State every Thursday in front of the SDSU Farmer’s Market from 12-1 p.m. If you are a fan of eclectic music that can’t be heard from listening to the radio don’t miss out on our Turn Ups. Last Thursday AUptic paid a visit to our campus and showed off his musical talents from singing to playing guitar. However, he is no stranger to KCR Turn Ups and our campus as this was his second time performing on our campus.

Now you may be wondering where did such a name as AUptic come from? That is exactly what I asked him after he finished playing his set. He laughed and told me that the A and U in AUptic stood for astronomical unit and that optic in its literal definition represented behaviors and properties of light. This cosmic-inspired musician definitely bestowed his wisdom on me as we talked from the lows and highs of his life.

This is not surprising from someone with 33 years of life experience under his belt. This conscious rapper knows there are not many like him who chose to not rap about making money, cars and the many women one has had sex with. He found it interesting that many artists feel the need to share everything and it was just noise to him.

“If it doesn’t improve around silence keep it shut,” he said.

I enjoyed that he was not afraid to speak his mind this was by far one of the most intimate interviews I’ve had.

I wondered if his love for music ever got in the way of his relationships. Artists are constantly on the road and it can take a toll on both parties.

“It’s really hard. I definitely broke up with a lot of great people that I have been in love with that didn’t correlate with my busy lifestyle,” he said.

However, when it came to his career and music he was extremely optimistic and driven.

“I have to go where the opportunity is best for where I want to do,” he said.

AUptic mentioned that he was open to the idea of starting a Kickstarter or Indiegogo campaign to fund his musical endeavors. He also pointed out that many artists are starting to be self-sufficient and using resources available at their disposal to get their music out there. It didn’t bother him that he is an independent artist, but he did wish he had more connections as do the artists that are signed. However, he finds that being an independent artist has allowed him to be a one man show, which means learning how to maneuver in the music industry.

When it comes to his music this artists makes sure every lyric and beat is a reflection of his current mentality. The human condition changes and so does he.

“I don’t write anything I don’t think is useful,” he said.

He wants fans of his music to gain something by listening to his songs. This artist has definitely gone through many ordeals surviving Hurricane Katrina and following his dreams from then on. Apart from being a wise man he’s also a wise entrepreneur in order to keep his musical dreams alive.

If you still need another reason to check out this lyrically galactic artists check out his Soundcloud for more out-of-this-world beats and lyrics:

Check him out on Facebook, Twitter, Soundcloud, Spotify, YouTube, Instagram as well as on ReverbNation! Also, stay tuned for a review of next week’s artist as we continue to explore each and every artist. This has been your weekly Thursday Turn Up interview by Maria del Carmen Huerta. Enjoy!