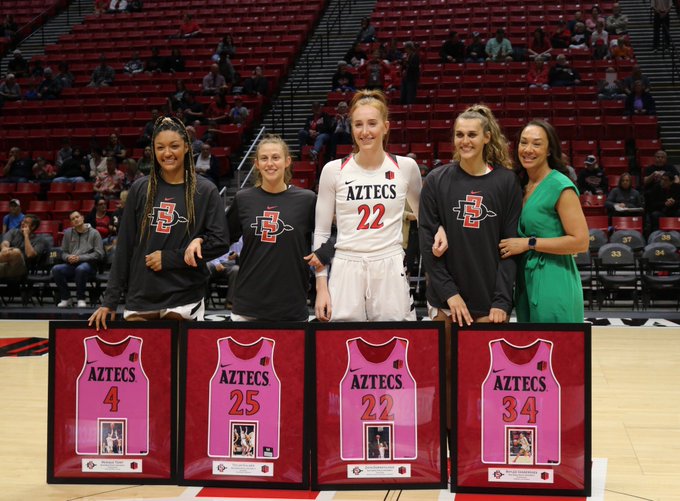 “Baylee [Vanderdoes] and Monique [Terry] have been with me all four years and I’m amazed with their growth on and off the court. Both of their roles transitioned into starters. I’m proud of the effort they put in,” Head coach Stacie Terry-Hutson said.

“Zayn [Dornstauder] has been here two years and I don’t know that we’ve had a dominant post player since I’ve been here and she’s been able to really work on the offensive end. She’s so skilled so she’ll be missed. TK [Taylor Kalmer] is so competitive and has such a good work ethic. These four seniors have all helped changed our culture.”

The Aztecs won their home finale and final regular season game 81-68 against Nevada. Hot shooting throughout the entire game left little in doubt as the Aztecs closed out their season.

“We need a third scorer,” Terry-Hutson said, “Sophia [Ramos] and TK [Kalmer] take up so much of the offensive load it’s nice to see Zayn [Dornstauder] and Tea [Adams] takeover some nights.”

Their offense wasn’t the only part of their game that clicked. After getting on track, the Aztecs defense played with grit and held the Wolfpack to 34.9% shooting.

“It’s senior night so give everything you have so I think that’s the mentality too,” Vanderdoes said, “I always give it my all, but it was just different tonight.”

The Aztecs started the game down 12-4, but after a few adjustments they took a 42-28 halftime lead.  Kalmer ended the first half with 15 points and made her first eight shots.

Jokingly, Kalmer said she couldn’t recall making eight shots in a row. “I don’t know, maybe in H-O-R-S-E or something.” She finished with 20 points and extended her streak of scoring at least 10 points per game to 24.

As a team, the Aztecs shot 55% from the field and 83% from three in the first two quarters. A 15-0 run out of halftime gave them a 24 point lead with less than two minutes remaining in the third.

“We were able to build a lead and give ourself a cushion and we see once we do that we have a great shot at beating some good teams,” Kalmer said.

SDSU earned their ninth win in conference play and it’s the most they’ve had since the 2014-15 season. The Aztecs also finished 9-8 at Viejas this season, but it still hasn’t sunk in that it was their final home game, especially for the seniors.

“It hasn’t sunk in,” Vanderdoes said, “I feel like I’m just gonna put my shoes back on and practice here tomorrow.”

It was a close knit group who cared for each other tremendously this season. The over 1,000 fans in attendance could see how locked in the Aztecs were tonight, on both sides of the ball.

The team wanted to send their four seniors out with cheerful memories of Viejas arena.

“My made of honor will probably be Monique [Terry],” Vanderdoes said, “Zayn [Dornstauder] and I got really close and TK [Kalmer] makes be better. She demands that of everyone on the team and we all meshed really well together and we all love each other.”

SDSU will be the No. 6 seed and face No. 11 Utah State in the first round of the Mountain West Tournament, which starts March 1 in Las Vegas.

“In February I think we won six out of the last nine and two of those losses were in the single digits,” Terry-Hutson said, “I think we’re playing good basketball right now so I’m excited to see what we travel with to Vegas.”