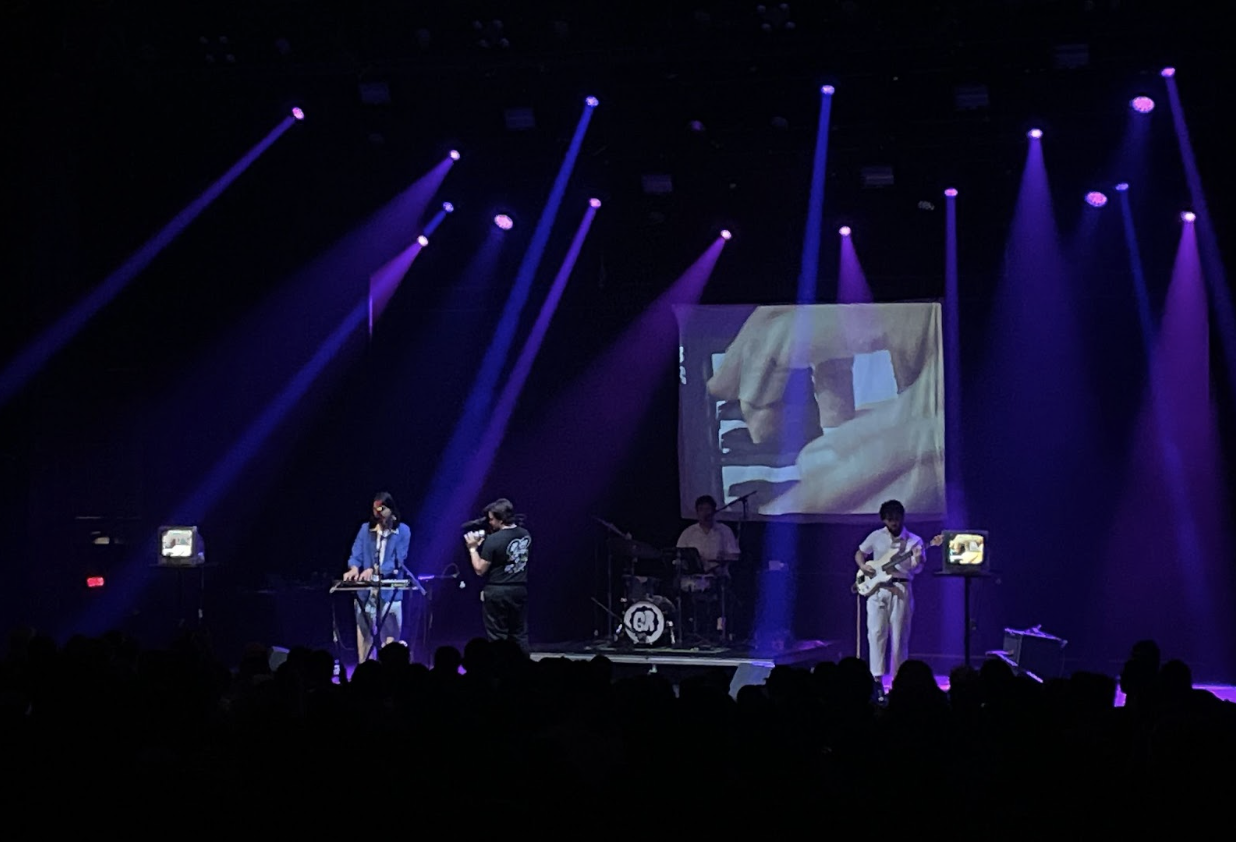 The almighty algorithm often feeds us with an endless stream of familiar content that is only differentiated by slight variation. But once in a blue moon, we are suggested a true artist trying to break through the mold of normality. Ginger Root is one of these few artists who is well deserving of their time in the spotlight. The music video for their breakthrough single “Loretta” was heavily favored by the YouTube algorithm and pushed it into the feeds of thousands (including myself) who took notice of the unique blend of city pop, soul, funk, and elevator music.

Ginger Root, the brainchild of Cameron Lew, has had a meteoric rise in the indie circuit. A mere seven months before their headlining show on November 17th at Observatory North Park, they were at the same venue opening for Hippo Campus in April. Ginger Root did not waste their opportunity as they put on a show to remember.

Every detail about their show seemed meticulously planned out by Lew. The stage setup, for example, added to the pseudo-VHS nostalgia evoked by their discography’s chunky synths and syncopated basslines. Two clear rear-projection televisions on both sides of the band created a stereo image with a small projection screen looming over the band in the middle. These screens were occupied by a live-feed from a cameraman who pranced around for the duration of the set. Ginger Root’s live band consisted of a trio with Lew singing and playing multiple keyboards at a time while accompanied by a drummer and bassist. Occupied by covering so much sonic ground through figuring out complex arrangements, the cameraman served as a strong foil (alike to those found in hip-hop live settings) to the band by dancing and keeping the energy flowing.

The concert opened with a news report from the fictional JOSN before the band launched into “City Slicker”. The most striking part of the curtain reveal was Lew’s decision to use two microphones; one being a red telephone and the other a conventional studio microphone. It served the music well however, as the limited frequency of the telephone allowed the verses to build tension while the regular microphone opened up the chorus. It was another example of Lew being conscious of the trio’s limited sonic abilities and compensating for it through simple solutions.

As the night continued on, Ginger Root grew more comfortable and laid back deeper into the pocket. Tracks from earlier albums such as “Le Château” and “Karaoke” showcased the band’s versatility in style and groove. After the first batch of songs, the stage went dark and a commercial from the Ginger Root cinematic universe played as the band tuned. While the storyline was not as clear for the casual fan, it was still entertaining to watch and experience. The band was truly focused on creating an entire show experience for the concertgoer rather than simply playing for an hour and collecting their check.

The highlight of the show was a medley of anime covers bookended by “Juban District”. The mashup was most likely prompted by Ginger Root’s covers of the Sailor Moon and Neon Genesis Evangelion themes which both went viral on TikTok. Immediately upon the transition from the second chorus of “Juban District” into “Tank!” (The Cowboy Bebop opening), the energy from the crowd surged and everyone began dancing. Bass player Dylan Hovis utilized every inch of his instrument as he played both basslines and guitar leads for this portion of the set; blistering solos mixed with head-bobbing grooves was a true spectacle to enjoy. Smooth, sudden transitions between songs kept the audience guessing which opening would be coming next.

As the night came to a close, Ginger Root played a soft rendition of “Fly Too” followed by “Nisemo”. Lew, continuing with the motif of vintage advertisements, quieted down the crowd for a brief bit of banter where he wanted to thank the two sponsors of the show– the YouTube algorithm and fans in attendance. Lew then counted off the band and went into an energetic performance of “Loretta” and “Weather”.

Ginger Root then went on to perform a special rendition of “Mahjong Room” for their encore. A lone spotlight shone on Lew as began the song using one of his synths as a drum machine and softly singing the verse. When the chorus came around, the other two members of his band strolled on stage before creating a grand instrumental entrance as the song transitioned back into the verse. The grooves were tight and the basslines were even funkier as the band beefed up the arrangement for the live setting. It seemed as if everyone in the crowd was bobbing their heads in sync, as if the band put them in a trance.

Ginger Root’s set at Observatory North Park was truly one for the books. The attention to detail in every aspect of the show made the audience feel truly acknowledged and cared about; it went beyond the normal platitudes spoken by bands trying to fill empty space in between songs. After two successful EPs and a well-deserved headlining tour, the future is bright for Ginger Root.