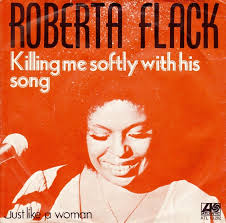 I don’t know watsup with me and lists, but BuzzFeed should holla at me. This week I’m going to be naming a couple of famous tunes by their original performers and mentioning the artists who popularized them. Sneaky little artists, nothing gets past me. I’ve learned a lot making this list, so you might have already known these were covers, but hopefully some of them raise a couple eyebrows.

You may be familiar with Lauren Hill’s rendition of this song with the Fugees. After listening to the original we can hear that Lauren Hill was definitely inspired by Roberta Flack’s strong yet soft vocals. I had no idea the Fugees hip hop version was a cover, but now comparing them we can see Roberta Flack gives her song a beautiful light beat with the piano, while the Fugees have a stronger presence of percussion. I love the original version now and it gives you a great place to start if you want to get into Roberta Flack’s music.

So funky! I can get down to this original version of Higher Ground by Stevie Wonder. Being familiar with the Red Hot Chilli Peppers rock version was cool, but we can see where the got their inspiration from. Stevie Wonder’s lyrics inspire and so do the sounds which involved a lot of new electronic instruments (well new in 1975). At the end of the Red Hot Chilli Peppers version they make sure to mention Stevie and give him credit.

On my search for covers I found one of my favorite songs to be a cover. This would be Vital Signs,originally performed by the Midnight Juggernaugts. I first heard Tame Impala’s version which has an upbeat dreamy feeling to it. Midnight Juggernaut’s carries more of their bass and keyboard on this track.  The lyrics are so dope and in my opinion they make it a perfect track for a summer festival. The Midnight Juggernaut’s video is definitely trippy, I’m not really sure what’s going on with that. Either way super cool song.

I had only ever listened to The Ramones and The Rivieras versions’ of California Sun, but I can not believe how cool Joe Jones’ original is. It’s such a fun song and it for sure made me want to dance (which I did).  If any of us can relate to a song off this list it’s this one. California represent!

I might also be lame for not knowing this one, but whatever. Popularized by The Clash in 1977 the original artists  Bobby Fuller Four get down on the track  I Fought the Law with a little more of a dancing beat. Still it displays a surf rock vibe being that the Bob Fuller Four originated in Los Angeles. Get wavy with this one.

Last but not least we have Taurus by Spirit. If you listen Spirit’s guitarists Randy California’s rift may sound a little familiar. If you have ever heard Led Zeppelin’s famous 1971 track  Stairway to Heaven you will recognize it right away. I have no doubts Jimmy Page was inspired by Randy California on Stairway to Heaven, but listen for yourself and see what you think.