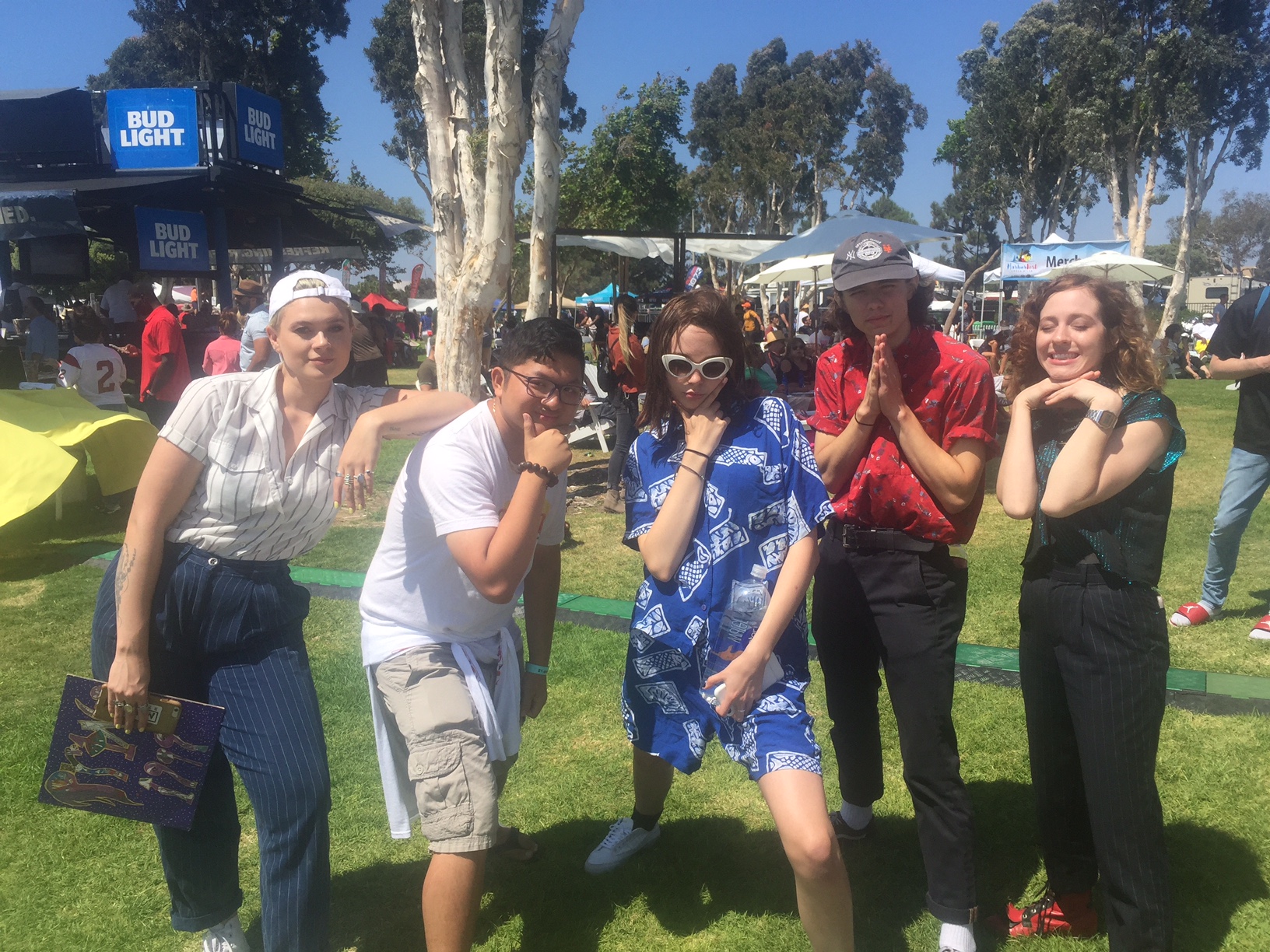 On Aug. 18, the Regrettes came back to San Diego to perform at the Chula Vista HarborFest. The band consists of Lydia Night (lead vocalist and guitarist), Sage Nicole (bass), Genessa Gariano (lead guitar) and, of course, Maxx Morando (drums). I interviewed the group again, (here’s the previous one), this time covering Dunkin’ Donuts, celebrity band replacements and many more fascinating topics.

Warning: Some explicit language below.

KCR: What song made you want to play music when you were young?

LN: “Beat on the Brat,” by the Ramones, was the first song I would sing constantly. So, I guess I would go with that.

MM: Probably “Everlong,” by the Foo Fighters, or “The Rat,” by the Walkmen.

GG: I really loved “Brown Sugar,” by the Rolling Stones.

KCR: On TV, your song, “Hey Now,” is in a Dunkin’ Donuts commercial. How crazy is that?

KCR: Do you actually go to Dunkin’ Donuts?

LN: We actually have. On tour and – okay, you know what I really like about Dunkin’ Donuts? People will think i’m gross for this, but they have these little hashbrown bites… they’re so good!

KCR: Hopefully you guys get sponsored by them.

KCR: Next question. So, who hasn’t listened to your debut album, “Feel Your Feelings, Fool!”? And, one of my favorite songs on there is “Picture Perfect.” How did that riff of Salt-N-Pepa’s “Push It” become a part of the song?

LN: I love that song. I don’t know. I can’t really remember exactly how it happened. I think I just started singing it as a joke at one point, just playing it, and all of a sudden I was like, “Fuck it. Let’s do it.”

KCR: How do you feel when a fan is always asking you to perform in their city?

LN: We never have an answer. It’s just kind of a bummer because we don’t know.

MM: Brazil is a popular one. All the time, every band gets asked to come to Brazil. It’s kinda like a meme (laughs).

LN: We want to go to all these places but we just haven’t yet.

KCR: If you weren’t playing music, what do you think you would be doing instead?

ing. I really like to cook now, so I would love to learn how to cook really well. I don’t know. Nothing, depressed in my room.

MM: I’d probably do something with movies or directing – just making movies and stuff like that. I’m into film and anything with film.

GG: I would do design. Graphic design or some sort of art, and then work for a non-profit for women. I think that doing those two things together would be ideal.

SN: I really want to have my own lingerie company and brand. So, probably that and being a mother to many animals. I’d be a lonely housewife with a lot of animals (laughs).

KCR: What would be the official drink of the Regrettes?

LN: There’s three. It would be yerba mate, coconut water or juice boxes. Juices boxes though, we kind of moved on from. That was like phase one of the Regrettes.

KCR: The last question to end this interview is, if you could replace yourself in the band with a celebrity, who would it be?

LN: Oh my god! Karen O and St. Vincent in a band together!?

GG: Holy shit! Wow. Am I allowed to curse? Holy-moly.

You can find the Regrettes on Facebook, Twitter and Instagram. You can listen to their latest album, “Feel Your Feelings, Fool!” on Spotify and Apple Music.