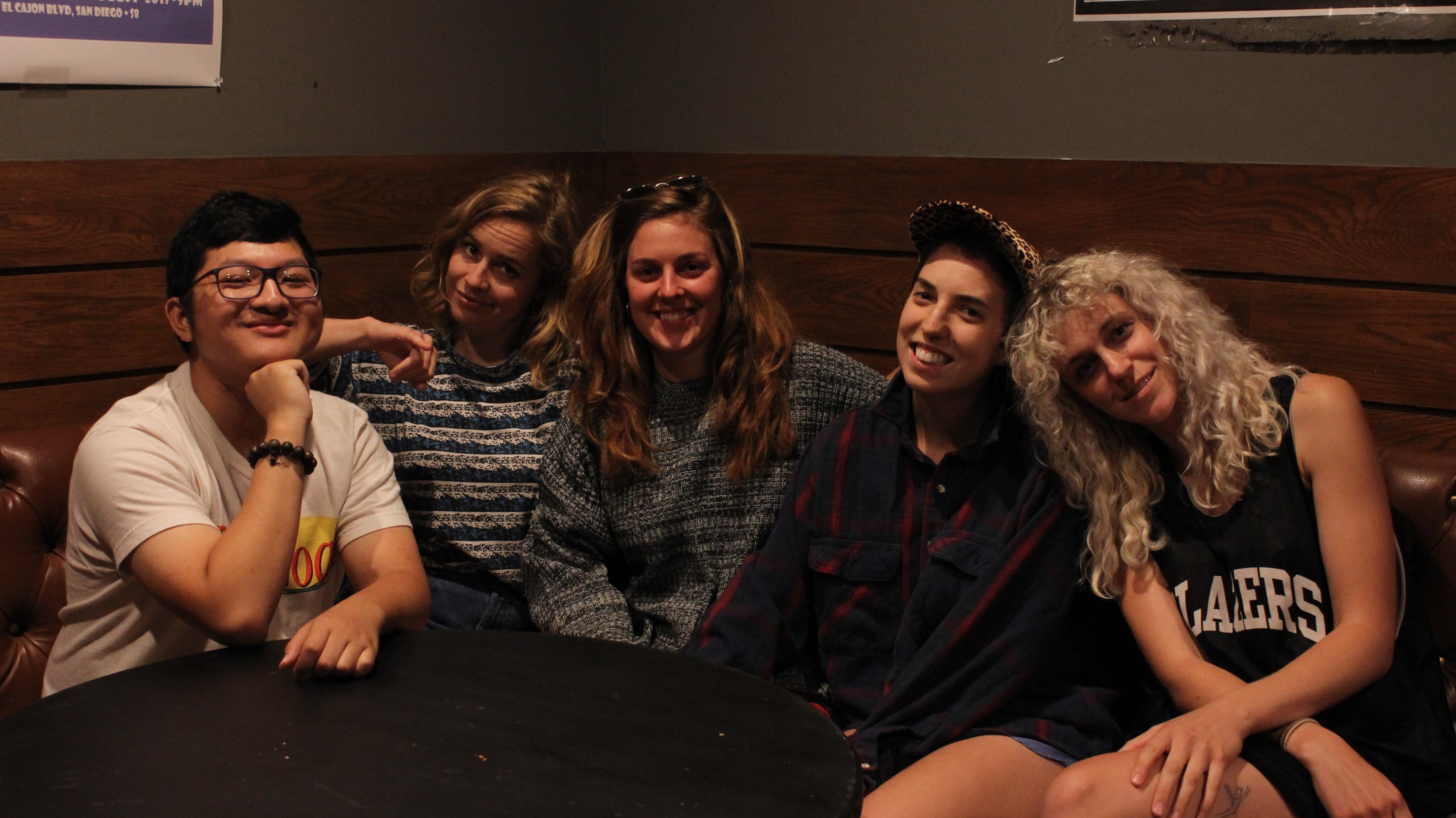 On August 4th, Chastity Belt came to San Diego to perform at the Space Bar. Lydia Lund, the lead guitarist, Gretchen Grimm, the drummer, Annie Truscott, the bassist, and last but not least, Julia Shapiro,  the lead vocalist and guitarist, all sat down for an interview. I talked to them about reality T.V., pet peeves, and the band’s official drink.

KCR: What was the song when you were a kid that made you want to get into music?

LL: I really got into the Strokes in middle school and yeah… those guitar parts were some sick lead lines, made me want to play lead (laughs).

AT: I was pretty into Weezer in middle school.

GG: I thought in high school, the coolest thing ever would be [to be] in a Fleetwood Mac cover band. That was my dream.

JS: Some of the first songs I ever learned on guitar were from Blink-182… very inspiring.

KCR: You’ve released three albums and dropped your latest one, “I Used to Spend So Much Time Alone,” in June.

Chastity Belt makes an explosion noise when they hear the word “dropped.”

KCR: Each album you guys drop, you get more mature with the lyrics and get bigger, popularity-wise, too. I remember when you all first started out and made songs like “Pussy, Weed, and Beer,” and even did a cover of Soulja Boy Tell ‘Em’s “Kiss Me Thru the Phone.” Do you ever miss how casual it was before?

GG: I got this one. Yeah, the “Kiss Me Thru the Phone” cover was actually from an old band called Combo Pack that was before Chastity Belt, and it’s pretty embarrassing so we’re not going to talk about that one too much. But, I will say that we all still have a sense of humor and it still feels casual. Obviously not all the time, like some things we get nervous for, but I can still look at anyone on stage and have a laugh [with them]. It’s not so obvious in every one of our lyrics, but we all still have the same sense of humor so that lightness is still there.

KCR: What’s one of the most memorable shows that you’ve been to?

AT: I would say on my 18th birthday, I saw the Flaming Lips and I got crowd surfed and that was cool. I got to touch Wayne’s (lead singer of the Flaming Lips) bubble – he came out in the crowd in a bubble. That was very memorable (laughs).

GG: I don’t think I have any. [I] can’t think of any. Probably like a Dave Matthews Band concert. That got really crazy.

LL: We went on tour with this band, Wire, and for some reason, I didn’t end up watching them that much. I think I was just hanging out. Anyways, then we saw them in Berlin and that night, we met up with Courtney Barnett and the band, we were all there with Wire. It was two bands we toured with and I was just watching Wire and all of a sudden, their songs were hitting me with this new intensity and it was just so good.

Yeah, I used to really hate the band, The National, but we were playing at Sasquatch Festival with them and I got too high and the visuals were really insane. They had this eye that was glowing and I was watching them and the eye was coming at me and I started crying. Ever since then, they’ve been one of my favorite bands.

KCR: Julia, I know you’re really into reality T.V., so my question is are you guys having any luck getting your songs on the show “Catfish” or doing a live performance on “The Bachelor”?

JS: Apparently, the guy who picks the music for “Catfish” really likes our music, so hopefully we’ll get to be in the next season. I’m also really into the show “Vanderpump Rules,” so maybe we can get on there.

KCR: If you guys weren’t focused on the band, what do you think you would be doing career-wise?

LL: I think I’d be a scientist.

KCR: Do you guys have any pet peeves about each other?

AT: I feel like it’s not really pet peeves, but more like we can predict what each of us are going to do. Like when Lydia gets a text message, she’ll giggle but not tell us what she’s laughing at. Julia loses her phone a lot but then finds it in her backpack immediately. Just little things like that.

AT: I’m always asking what’s going on because I can’t hear very well.

KCR: What would you guys say is the official drink of Chastity Belt?

JS: Kombucha. We all really like Paloma (tequila with soda and grapefruit), if anyone ever wants to buy us a drink.

KCR: The last question is, what do you think you were in a past life?

LL: I think I was an underwater creature. [I was] probably a whale, a humpback whale.

GG: [I was a] deer, maybe. For some reason moss came to mind but that’s a little bit weird.

AT: Maybe because I’ve been thinking about therapy a lot, but I was thinking of a therapist. Feels right.

You can find Chastity Belt on Facebook, Bandcamp, Twitter and Instagram. You can listen to their latest album, “I Used to Spend So Much Time Alone,” on Spotify and Apple Music.