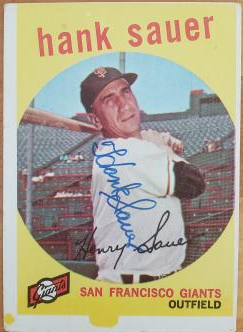 I am back with my second installment of my Baseball Players You’ve Never Heard of series. For this post, I will focus on Hank Sauer, who played primarily left field for the Reds, Cubs, Cardinals, and Giants over his 15-year career from 1941 to 1959. Sauer had quite the journey to becoming a steady performer in the MLB. He spent his mid to late 20s bouncing between the minor and major leagues for the Reds and missed the 1944 season serving in the U.S. Coast Guard in World War II. Upon his return from service, he spent the ‘46 and ‘47 seasons in the minors.

It’s safe to say that Hank Sauer was a late bloomer. Sauer never hit more than 21 homers in a minor or major league season until his age 30 season in 1947, when he hit .336 with 50 homers for the Syracuse Chiefs of the Reds minor league system. This otherworldly production in the minors finally earned Sauer a full-time job in the bigs at age 31 in 1948.

Sauer hit 35 home runs in his first full season with the Reds in ‘48, while also leading the league in strikeouts with 85. (A massive total, I know) Unfortunately for the Reds, Sauer got off to a very slow start in 1949, leading to a trade to the Cubs mid-season. The Windy City was where Sauer really took off as a major leaguer.

The Cubbies were not a great team in any of the seasons Sauer was there from 1949-1955, with the best record being an even 77-77 in 1952, Sauer’s MVP season. It’s because of this that Sauer was viewed as the reason to go see Cubs games, as he hit at least 30 homers in four of his years there, topping out at 41 big flies in 1954. In his MVP winning 1952 season, he led the NL with 37 homers and 121 RBIs. One might be curious as to why he only finished 26th in MVP voting in the 1954 season, as that season’s stats (41 HRs, 103 RBIs, .288 AVG) largely outperformed his 1952 stats (37 HRs, 121 RBIs, .270 AVG). I believe that the emergence of fellow NL 40-homer hitters Willie Mays, Ted Kluszewski (whom Volume 1 of this series chronicles), Duke Snider, Gil Hodges, and Eddie Mathews caused Sauer’s 41 homer output to not be viewed quite as highly as in 1952, and no doubt the fact that Sauer’s team was out of contention hurt his chances as well. One funny thing I must point out about the 1954 season is that both Cubs OF Hank Sauer and Yankees OF Hank Bauer received MVP votes. What a shame that the MLB never got to see an outfield shared by fellow Hanks Sauer and Bauer.

Hank Sauer ended his career with some lower performing seasons, as he was already up there in age for a ballplayer since he established himself in the MLB so late to begin with. He managed to hit 26 homers as a 40-year-old for the Giants in their final season in New York in 1957, then retired in 1959. He ended up being a longtime MLB coach and scout after concluding his playing career, so Sauer definitely had himself a nice lengthy career in baseball.

On a side note, I am proud to say that the image I provided at the top of this post is of my own signed 1959 Topps baseball card of Sauer. Every card in that year’s set came with the darker-colored signature, however my card also has the blue signature, which Hank himself signed when he was mailed the card by a previous owner. I’m really glad to own this card, and many old personally signed baseball cards like it, as it makes me feel that much more connected to baseball’s past.