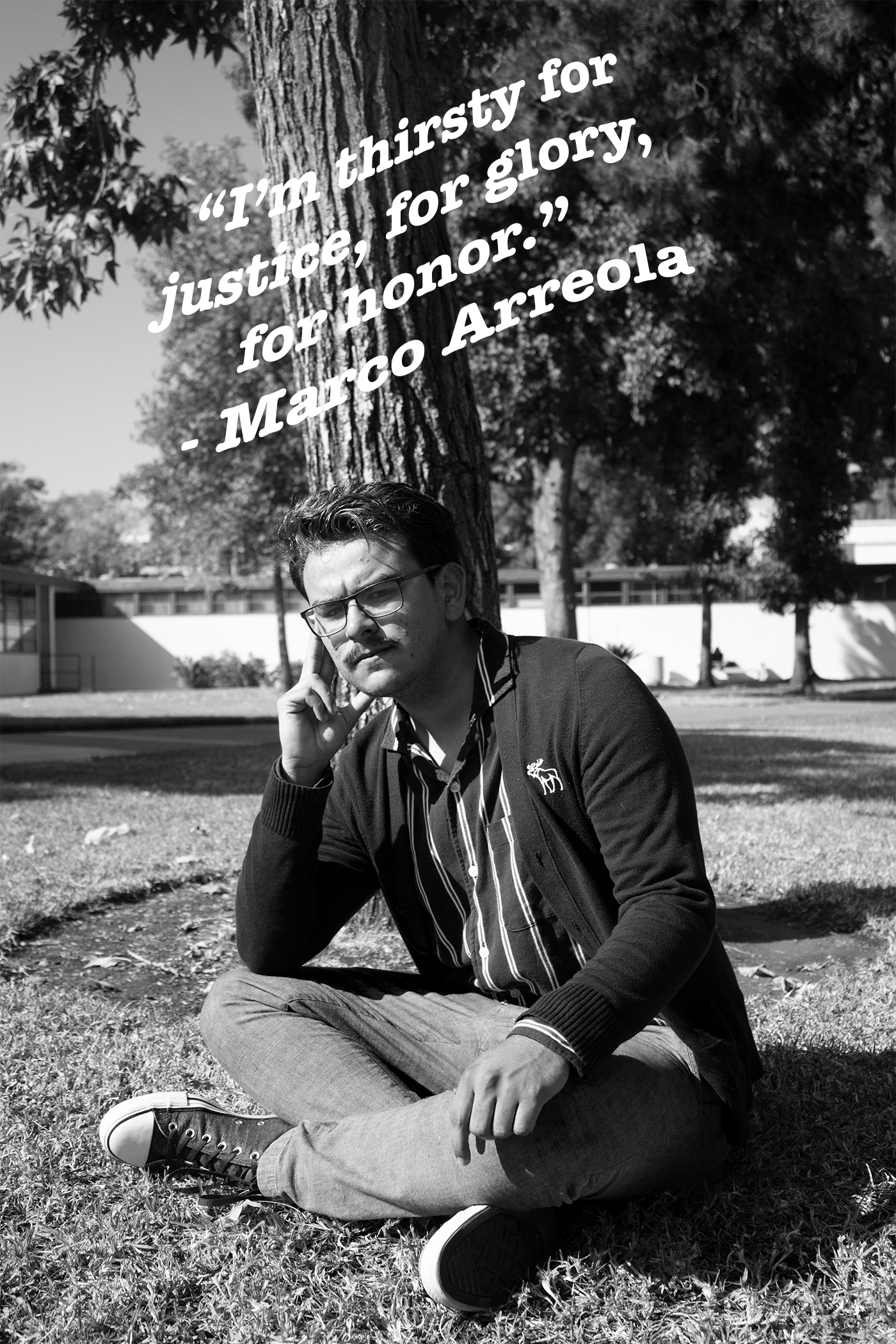 Impassioned by humanity, honesty, and patriotism, Marco Arreola explores the many facets of American society through open communication and positivity.

Senior Communications Major, and Sociology Minor, Marco Arreola was enticed by the sociological side of communication through the aide of his Sociology 101 professor Robert Fargo from Southwestern College. This class confirmed many of his preconceived notions on human society, but further expanded his curiosity. This baseline Sociology course drew his interest enough to enroll in a Sociology and Religion course with the same professor the following semester.

What truly drew Arreola to the subject was the humanistic perspective he provided the class. Empathizing with students and showing vulnerability made the class more inviting and an overall more fostering learning environment. Being a “free speech absolutist” he also fell in love with the open discussion forum the course provided students such as himself. The beauty of being able to see the human side of his professor is something that Arreola believes should stretch across every facet of humanity.

Arreola is the host of The State of ‘Merica on KCR, live Tuesdays from 3 to 4 pm. On this show, the political junkie and mental health advocate decompresses by playing a parody of himself. In the ever stressful times we live in, Arreola finds this time on Tuesday afternoons to poke fun at the seriousness of the times we deal with on a day to day basis. On one special episode, he read the entire U.S. Constitution word for word live on-air.

So, what is the state of America in his eyes? What are Americans all about?

“If I could describe Americans with one word, it would just be simply, American.” The unique hypocrisy of our beliefs tied together with our actions is a special kind of oxymoron reserved for the American people. Arreola discusses how despite being a secular nation, many pride themselves on Christian beliefs. Or the fact that we celebrate and uphold our voting system despite the fact many of us said we had to vote for the lesser of two evils in the most recent Presidential election.  He goes on to say, “Only an American would think that way.”

Patriotism can be seen as a flaw in society today as many view our nation to be a despicable one at that. Many are asking how someone can love this country, but Arreola has the perspective many need to take.

“Personally, I’m a Patriot. I’m proud to be an American,” he goes on to say, “but part of what comes with that is that you realize there are flaws in the country.”

America is currently in one of its most publicly critiqued states of recent history, but Arreola looks at that as an opportunity to grow as a nation.

“I’m thirsty for justice, for glory, for honor.”

He loves the fact that the problems of America are rising to the surface, seeing them as an opportunity to do better for the American people. The Bilingual Otay Ranch native is not like anchors we may see on FOX News at any given time of the week, he can recognize this nation’s flaws with the ability to see ways to make leaps towards the future. With the title of being an American holding so much weight, the pressure fuels his desire to make this country better than it has ever been.

The Righteous Mind by Johnathan Hyde is one of his favorite books and it has helped him understand the phenomenon of American Patriotism.

The dichotomy of modern politics has bred distaste for members of the “opposing” party for most. In turn, this has made it increasingly difficult for people on opposite ends of the political spectrum to foster progressive conversations. Arreola asserts having no political label as he feels that aides in the confirmation bias many come into these conversations with. He, like myself and many others, feel as though their beliefs are their own and should be forced to be put into the box of Democrat or Republican.

Arreola is doing this as his part to bring people together to have an open discussion. A recent Bernie Sanders appearance on FOX News drew a lot of interest from members all along the political spectrum. Arreola was enticed by this as Sanders told the audience to set aside the political party tag and merely listen to his ideas. He said, “It was such an enormous hit, I remember reading articles and seeing town halls about them agreeing on the substance of policies and not the titles of them.”

Arreola wants people to hear ideas, not focus on whatever connotation is placed behind the name of the idea. Politicians fuel their campaigns behind the terms and terminology they use and this is something Arreola stresses we all should be mindful of. He is pushing media literacy across the board for all; do our research and understand the concepts of socialism instead of being alarmed by the term’s association with communism.

Now politics aside, Marco Arreola has another project coming soon via KCR that he is very passionate about.

With two episodes already recorded, Arreola is bringing the audience a podcast focusing on discussions of mental health with people from all walks of life. Arreola was diagnosed with Schizophrenia during his freshman year of high school and it changed his life. Leaving traditional high school he was enrolled at Alta Vista Academy in Chula Vista where he finished out high school with other students who went through mental health struggles and discovery.

In this school, most kids are not expected to graduate let alone make their way to college. Arreola was a special case as not only did he graduate on time, he had aspirations of attending SDSU. He left the program and enrolled at Southwestern College where he made his transition here to SDSU. Now, being at State, he finds it important to be open about his mental health in efforts to make the discussion easier for everyone.

He “came out” as having schizophrenia at the beginning of this semester to his peers as well as members here at KCR and was received with nothing but understanding. The podcast has yet to come out as Arreola has struggled with being able to maintain the initial values he set forth for his show. He wants it to be genuine, and an open environment for discussion. However, mental health is tied to all the controversy we face in our everyday life. Tangents happen and what starts as a conversation about happiness can lead to discussions on race relations through American history. The conversations are happening and they will be heard, when they are ready to be heard.

The actions and discussions surrounding mental health are, “American” according to Arreola. Going back to his original description of the contradiction of Americans, this stands true as talks are happening but walks are not following the conversations.

“An Asylum patient from the 1940s has the same levels of anxiety of today’s college students,” mentioned Arreola, giving an indication of the times we are surviving mentally.

With anxiety levels high, Arreola keeps his focus higher and does his job to help himself and others around him. He is open to having a conversation with anyone; he wants everyone to be happy and he partially owes this mindset to his grandfather. When he was a child his grandfather told him, “Marco, be loyal to the things that matter. And never forget this, love humanity. Respect it, and serve it at all times and with all your soul.”

Arreola loves humanity in every which way; he actively seeks to make it better for those living within it.

Arreola does not believe he could be achieving the day to day success he is right now without his past failures. He viewed having to change schools and not being able to go straight from high school into SDSU as a failure along with the repercussions of his mental health struggles. Those experiences make him that much more grateful for the small successes of each coming day. If he eats something delicious, that is a success. If he goes to class, participates and compliments a classmate, that’s a success. Being able to share this story of Marco Arreola? That’s a success.