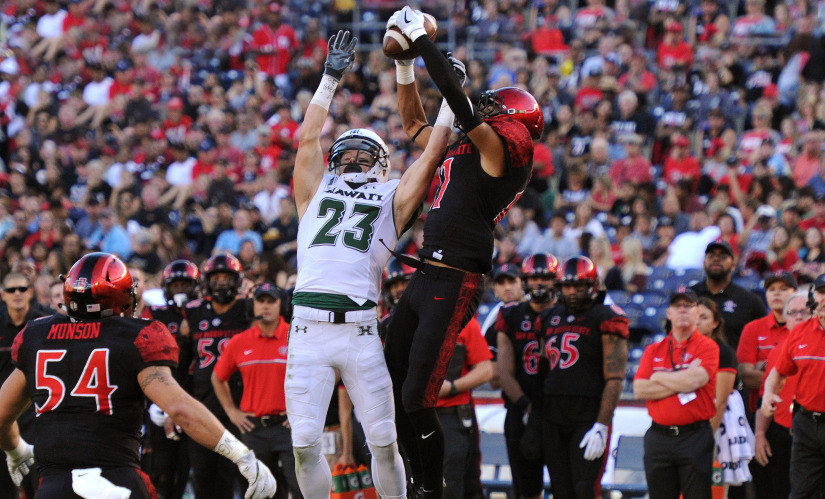 It was a special night for San Diego State football’s sophomore linebacker Ronley Lakalaka, as 60 family members were in attendance to watch him square off against University of Hawaii senior running back Steven Lakalaka, Ronley’s older brother.

Unfortunately for those in attendance, Steven landed on the wrong side of a one-sided affair, as the Aztecs dismantled the visiting Rainbow Warriors, 55-0.

“Ronley has got bragging rights for the rest of his life,” SDSU head coach Rocky Long said.

With the win, SDSU has now defeated 16 consecutive Mountain West opponents going back to their 2015 season.

SDSU’s defense was lights out once again, causing 4 turnovers (all interceptions). Also, the Aztecs’ held Steven, Hawaii’s lead back on the night, to just 42 rushing yards on 14 carries, successfully ending his seven-game streak with a touchdown.

Ronley accumulated four combined tackles and hauled in his second interception of the season.

“We’re playing very well right now but we’re not satisfied,” Ronley said. “We have a great defense because we feed off of each other and game after game we get better. It all starts at practice with preparation, and (head) coach (Rocky) Long does a great job at getting us lined up and ready to get physical with the other team.”

The Aztecs started off the game in a typical way, scoring on the open drive for the third consecutive week, and they never looked back.

SDSU sophomore quarterback Christian Chapman completed 7 of 15 passes for 76 yards and three touchdowns, which speaks to an offensive game plan loaded with play-action passes, flat routes, and dump off passes out of the backfield.

Junior wide receiver Quest Truxton brought in one of Chapman’s touchdowns to give him a score in back-to-back weeks, effectively extending his role beyond just his punt returning duties.

In contrast, the Rainbow Warriors’ colors appeared faded on offense, as Hawaii sophomore quarterback Dru Brown landed on the bench after completing 9 of 16 passes for 60 yards and two interceptions through the first two quarters of play.

Hawaii redshirt freshman Aaron Zwhalen replaced Brown for a majority of the second half, but even he couldn’t find the pot of the gold for the Rainbow Warriors. He completed 3 of 10 passes for 32 yards and an interception.

Redshirt freshman cornerback Ron Smith followed suit, as he registered career highs across the board, including seven combined tackles and an interception returned for a touchdown in his first career start.

“I just had to make sure that I got back because I saw somebody coming out,” Smith said in an effort to describe his interception. “I was kind of baiting him to see if they were going to throw it over and then I saw the ball in the air and just had to make a play. I was excited. When I got the ball, at that moment I knew I was ready to go. I’m happy I made that play.”

Offensively, senior running back Donnel Pumphrey, a Heisman contender who leads the nation with 1,581 rushing yards, was held out of the end zone for now two consecutive games.

Though he was held scoreless, Pumphrey inched closer to passing former Memphis running back DeAngelo Williams as the NCAA’s 4th all-time rushing leader.

SDSU will look to add to their momentum on the road against Nevada November 12.