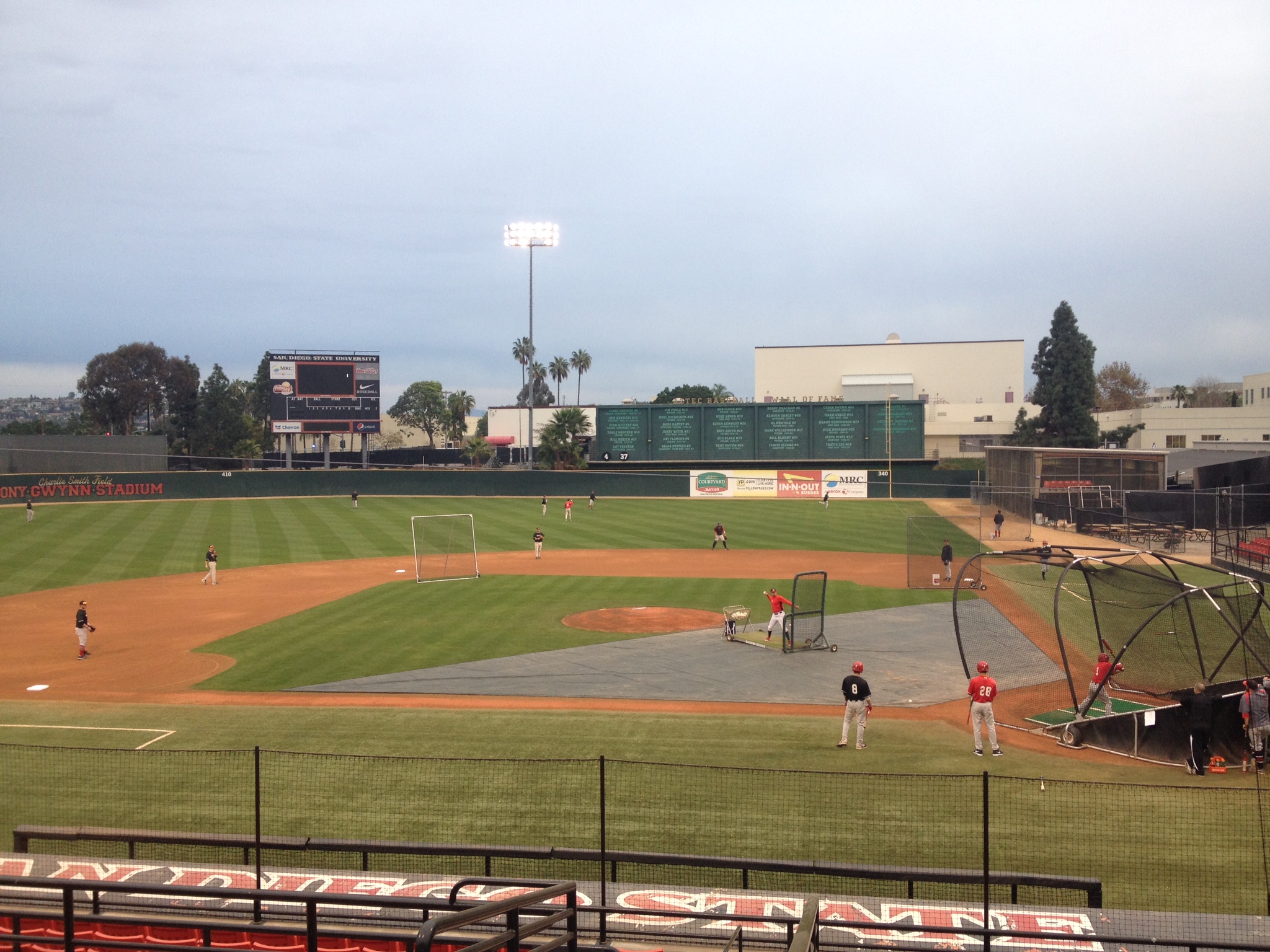 Before I get to talking about SDSU women’s basketball, softball, and Michael Sam, there’s a baseball column that takes precedent: KCR College Radio will be broadcasting eight SDSU Baseball games this season.

Aztec Baseball back on the diamond

SDSU Baseball is back with a 2-1 series win last weekend at San José State. They were bolstered by Mountain West Player of the Week, junior catcher Brad Haynal. Haynal went 4-11 this weekend with a home run and six runs batted in. Junior left-handed pitcher Mike Robards also had a good performance, pitching six and two-thirds innings while giving up two earned runs in a win.

The Aztecs start at home tonight at 6 p.m. against Loyola Marymount, but this weekend should be the best weekend for a multitude of reasons.

First, SDSU welcomes West Virginia to town for a three-game series starting Friday at 6. But on Saturday at 6 p.m, you can listen to Aztec baseball right here on KCR. I’ll be doing play-by-play commentary with Kristian Ibarra and Brett Moore doing color commentary. We’ll have team coverage, and I’ll update everyone on my show Thursday at noon.

SDSU Softball is off to a great start after winning the Campbell/Cartier Classic at SDSU Softball Stadium this past weekend with a 3-2 win over St. Mary’s in eight innings. The Aztecs are off to an 8-2 start, and senior outfielder Patrice Jackson has been a stud, with a .500 batting average, an even more outrageous .694 on base percentage, four home runs, 10 runs batted in, and all in just 10 games.

Let’s also not forget sophomore pitcher Danielle O’Toole who so far is 7-0 with a 1.43 ERA and 35 strikeouts in eight games this season.

Two of their next three games come against teams ranked in the Top 20: Texas A&M and Missouri. These games will be a great indicator of how good the Aztecs are.

Women fighting for a seed in Vegas

The women’s basketball team, still living in the shadow of the “12,414 strong,” is fighting tooth and nail for a seed at the Mountain West Conference tournament in Las Vegas, which is just under a month away. The Aztecs are 6-6 in conference play after beating Air Force 77-66 last Saturday.

Their next game, tomorrow at Utah State, is the most important game of the season right now. But they’re in that position where every game is the most important. This is a very winnable game for SDSU; Utah St. comes in with a 10-14 record (4-9 MWC), but don’t let that record fool you.

The Aggies have a player who might be the front-runner for Player of the Year in the conference: Jennifer Schlott. Schlott is having an astounding year, averaging 24.8 points, six assists, four rebounds, and two steals per game. Her points and assist stats are tops in the conference.

But why is Schlott so prolific? She shoots a lot of free throws. She has been to the charity stripe almost 200 times this season, and has made 159 of those for a cool average of 6.6 points per game from the line. She shoots an average of around eight per game.

This is the biggest obstacle for the Aztecs, but they shouldn’t completely ignore the other two players that score double digits in Makenlee Williams and Franny Vaaulu who account for a combined 26.6 points per game.

With that being said, SDSU has their hands full, and freshman point guard Ariell Bostick needs to keep her cool, but also be her high-energy self. If that happens, then Khristina Hunter and Cierra Warren will flourish underneath, where the Aztecs have a huge advantage.

They should be encouraged by their 16-point throttling of the Aggies at Viejas Arena back in January, but they need to take care of business in order to have a chance for a good spot at the tournament.

Here’s the big picture: SDSU plays six more games, and the teams have a combined record of 26-37 (they play New Mexico twice). They have very winnable games against New Mexico, San José State and home games against Fresno State and UNLV. Stay tuned, it’s coming down to the wire.

Now, for the story of the week on the national level: Michael Sam

Michael Sam, the defensive end from Missouri who came out as gay ahead of the NFL Draft,  might be one of my favorite sports stories this year. The reason being that he came out to his teammates back in August. A lot of people in Colombia, Missouri knew he was gay long before the New York Times and ESPN picked up the story nearly two weeks ago.

But the support in Colombia has been massive for him, from drawing his name in the snow at the Tigers’ football stadium, to giving him a standing ovation at the Missouri basketball game. Personally, I am all for gay athletes in the NFL, but The Onion, yes the satire newsletter who frequently equates Kim Jong Un with the word ‘genius,’ has made a great point about Sam going into the NFL.

The Onion’s article is titled “Michael Sam Hoping Sexual Won’t Be Issue in Locker Room Full of Testosterone-Fueled Former High School Bullies.” That says it all, just look at the Jonathan Martin and Richie Incognito fiasco in Miami, and Martin wasn’t even gay.

Hopefully the Michael Sam ordeal won’t play out like that, but there’s a lot of possibility of some animosity toward Sam as possibly the NFL’s first openly gay player.