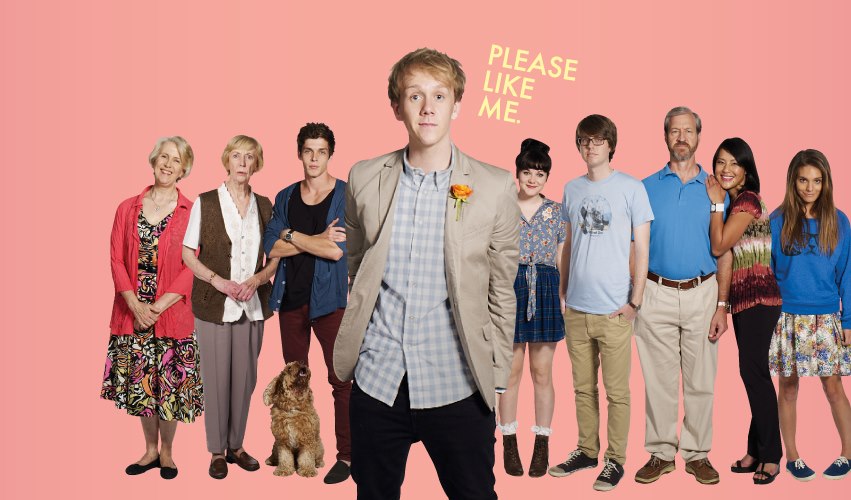 “I think we should break up. I just think we’ve drifted. And also you’re gay.”

“Please Like Me” is the charming comedy you most likely aren’t watching but should definitely be watching.

It’s surprising how many quality television shows are coming out of Australia. “Please Like Me” is the first television show I have watched which perfectly captures, not the struggle (as often portrayed) of coming out as gay, but the awkward comedy of the process. Mainstream media likes to portray “coming-out” as a traumatic, dramatic and angsty process for gay people everywhere, with intolerance, homophobia, and other evils lurking in every corner.

However, the revolutionary statement “Please Like Me” presents is the idea that coming out is hilarious, surprising, and downright awkward. Within the first half of the first episode of “Please Like Me,” the main character Josh has to deal with a series of somewhat unfortunate events:

The series opens up with Josh eating a sundae with his “girlfriend,” mumbling about how he is at the height of his youth and he isn’t the slightest attractive. Like this is the most attractive he’s ever going to be. Before he goes on his tirade, his “girlfriend” Claire breaks up with him and tells him she thinks he’s gay. Naturally, Josh says, “No, I’m not…” however, his somber attitude tells us more, that even he thinks so too.

This sets off a chain of events which introduces us to the many charming characters of this ensemble show. This is an ensemble show with a cast that works extremely well with eachother. We are immediately introduced to Josh’s nerdy best friend, Tom, who has a strange obsession with giraffes and is in a strained relationship with his over-sexed and under-educated girlfriend, Nieve. Tom’s back-and-forth banter with his girlfriend and his dilemma of whether or not breaking up with his girlfriend is Tom’s main arc.

“Didn’t she once light your passport on fire?”

“She didn’t want me to leave, it was romantic.” Tom’s new co-worker Geoffrey, is Josh’s first love interest and also a great screen presence (as in wow he’s hot). However, that’s pretty much all he brings to the table. A hot face with a boring personality, and no comedy is derived from him at all. Most of the comedy is found in Josh figuring out what to do with a pretty boy like Geoffrey after him. Is he supposed to pet him? Is he supposed to feed him? Josh, fresh out the closet, is clueless.

Josh’s coming out process is a fascinating and hilarious event to observe. Josh is a joke-fest, lashing out joke after joke about his curiosity regarding gay sex or his mom’s depression. It’s not the lines that are hilarious though, it the “first-time” events that Josh puts himself through to get through coming out. From his first date to his first sexual experience, Josh has us groaning and crying (from laughter) and second hand embarrassment. It’s almost painfully awkward. The comedy we see in “Please Like Me” is much like the quirky sense of comedy we can observe in “New Girl,” “The Mindy Project” and “The Office”, where it’s more of a situational type of humor. One of the more important plot arcs of the series deals with Josh’s mother, Rose’s, depression. Josh has to take her in and live with her to monitor her condition. It is in Josh and Roses’ moments together that the show becomes less about Josh coming out, but more about his relationship with his mother, who is in the midst of a mid-life crisis. Josh’s relationship with his depressed mother is comedic, however Josh delivers the scenes with such levity that as viewers we can definitely see the darker undertones of the comedy of the show.

Other familial relationships Josh maintains include that of his father, Alan, and his father’s new wife, Vietnamese woman Mae. Mae is a comedic force, I did not see coming. Delivering lines such as,

“Alan, I promise you, no one is attempting suicide because of fat man like you! Your face look like a scrotum!”

It definitely is an exploit into the Asian stereotype of having a heavy accent and a hard-headed attitude, however, “Please Like Me” has created three dimensional characters out of all of it’s side-characters. At first, I was mildly wary of how Mae’s character would play out the Asian stereotype which is steeped deep into the television world as a loud, obnoxious and stern. However, as the series progressed, we see Mae as more than an Asian stereotype, but a supporting mother figure to Josh, a smart woman whose wisdom is often over-looked, and an overall respectable woman. It isn’t a large step towards Asian representation in media, however it is a small step. It is very unlike the “Asian bimbo” stereotype I assumed she would be type-casted under. The creator Josh Thomas is a well-known young gay comedian in Australian and much of the experiences Josh undergoes in the show is directly derived from Josh Thomas’ real life experience. What Thomas provides us through his comedy is the introduction of a new type of gay man in entertainment today.

For far too long, gay men have been portrayed in the media as either, a closeted hunky jock, the stereo-typically feminine drama kid, or as over-sexualized. Josh Thomas presents a new portrayal of the gay identity as something entirely more realistic.

Awkward. Timid. And sometimes doesn’t know what to do with hot boys.

Watch “Please Like Me” Season One (six episodes) on Pivot or by any other means. Listen to “18 and Not Pregnant” on Mon. 8PM