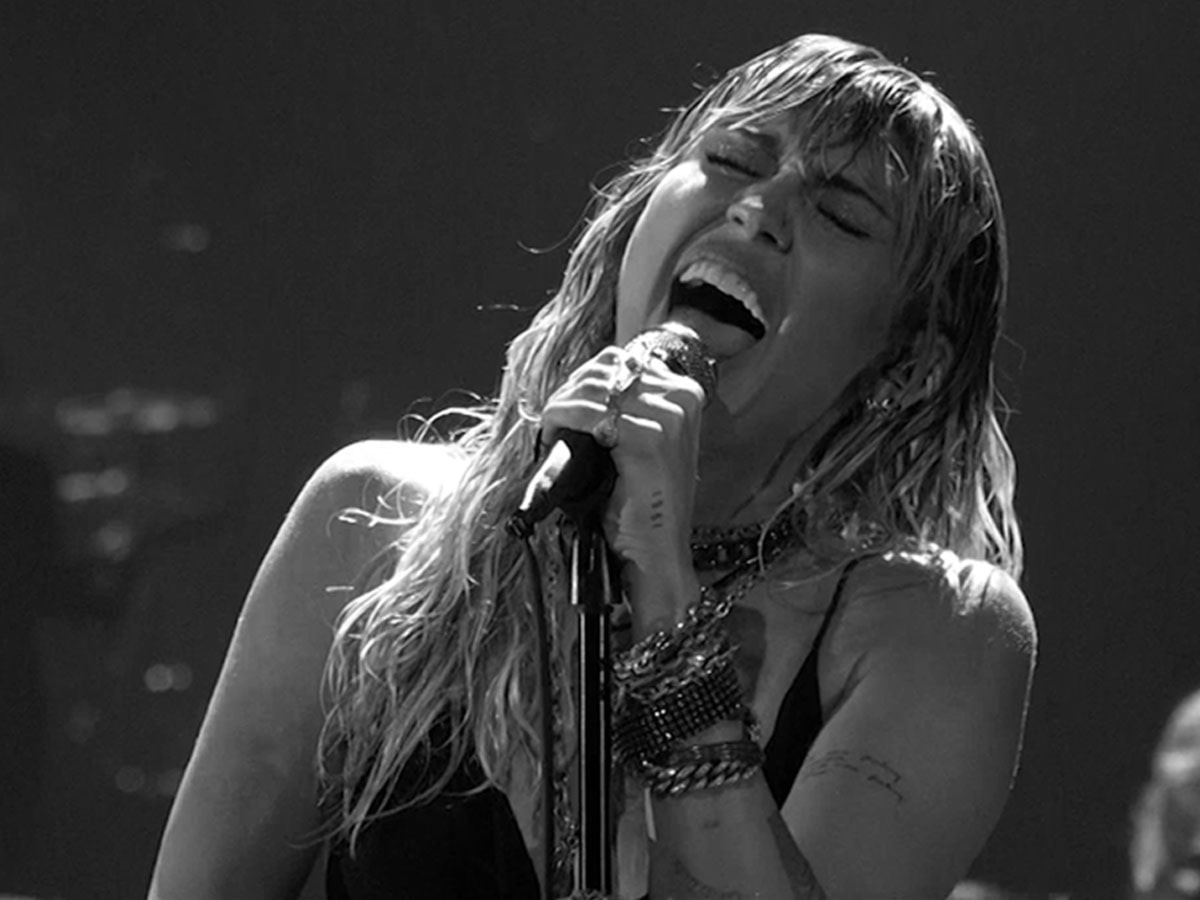 They Did What? is a series dedicated to what the media does not broadcast about your favorite musical artists. I present to you, Miley Cyrus.

“Everybody makes mistakes, everybody has those days.” If you do not know where this quote is from then you have come to the right place. Who could have possibly said this? Well, it is Hannah Montana, a childhood icon from this generation, who happened to be played by Miley Cyrus herself.

If you do not know, Miley Cyrus was a childhood star who starred in her own Disney show, Hannah Montana, that started in 2006 when she was only 13 years old. The show revolved around a girl who was living a double life of being a famous pop star and living a regular life of going to school. This quote is one of her songs from the show called “Nobody’s Perfect.” If you listen to this song, the lyrics are actually a great lesson to teach everyone. Hannah Montana was obviously directed towards young children but this is a lesson that I think many people need to learn today. This song to me mirrors the life Miley has lived, yet it came out years ago before her career flourished. One lesson I took is that you learn from everything in life, even your mistakes and you can see that with Miley’s life.

Many people know Miley from her Disney days, her rebellious days, or know her for being in a long term relationship with Liam Hemsworth that recently ended. These are the things the media focuses on but there is more to Miley than what people may think.

You may remember a time where Miley was twerking on stage at the 2013 VMAs and making lots of music about partying. People change and go through phases. Miley says, in “Carpool Karaoke” with James Corden, that who she was in the 2013 VMAs made her who she is today. It made her realize that if that many people will talk about her then she needs to bring good to the world so people will talk about that. Miley said that the VMA experience led her to become an activist. She does not think she would have even started her own foundation, which I will explain later on. She has learned to embrace her past because it is a part of her instead of running from her past like she was trying to do with this performance.

“I think when you are a teenager, young adult, you’re trying so hard to be cool or to prove something or to be something away from who you’ve been as a kid. And I guess as I’ve gotten older — even though it’s not who I am now, I’m not afraid of who I used to be.”

The following year after her infamous 2013 VMA performance, Miley did something that touched the hearts of many. Instead of taking in all the praise and basking in the spotlight, Miley allowed for a formerly homeless man to accept the award she won for her song “Wrecking Ball.” The speech put into perspective how much money the music industry makes, yet there are so many homeless people right down the street, especially youth and young adults. Miley was making a statement to the world that we need to help those around us. Miley not accepting her own award shows her unselfish character and how big her heart is for others.

Being a Disney star comes with certain expectations and if someone acts “out of the ordinary” it will receive the attention that would not have happened if they weren’t a Disney star. In order to prove yourself, you have to step out of that box. Being Hannah Montana was the only way people knew Miley. Being this clean-cut teenage girl next door character. The minute she broke that stereotype, the world blew up. How can one expect someone to be the same their whole life or career? People change, people grow up just some people do it differently. Miley had to break the boundary of being just a Disney girl to being a singer, an artist who can make it in the industry.

There is more to Miley than the Disney star.

Miley Cyrus has a giving heart and truly cares for others. If you are not aware there were deadly fires in California this past year that took Miley’s house and many others Miley donated $500,000 to help other wildfire victims and asked for her fans and friends to donate to the Red Cross to help others. Miley could have put all her money into building or buying a new multi-million dollar home for herself. Instead, she was more concerned with helping others first. She knew that she had the money to buy a new home but some of these other people lost everything they had and may not be able to live in a real home for a while.

In 2014 she started her own foundation named Happy Hippie that is dedicated to helping the homeless youth of our country. She is dedicated to helping the homeless because her dad, Billy Ray Cyrus, was homeless before he had his big break in the music. According to the website, The Happy Hippie foundation has a mission to rally young people to fight injustice facing homeless youth, LGBTQ youth and other vulnerable populations.

“It is essential to our lives to do good for others! The only way we can truly be happy is if we are making others happy! That is this Hippie’s goal!”

According to Happy Hippie, “1.6 million youth are homeless each year.” Furthermore, “40% of homeless youth identify as LGBTQ, and family rejection is the most common reason LGBTQ youth experience homelessness.” To make matters worse, about one in every three homeless LBGTQ face rejection at homeless shelters solely because of their orientation. Miley wants acceptance in this world. Being apart of the LGBTQ community herself this is an important issue that Miley wants to fight. Miley has been criticized for being a part of the LGBTQ community. She likes to think of herself as pansexual, which means you are simply attracted to people no matter who they identify as. You like someone because of who they are not their identity.

People will hate you for being different but what you make of that hate is up to you. Miley has pushed past that and embraces who she is. As human beings, we like to put things in a box and give order to everything because that is how we make sense of our world. It is hard for us to understand that there needs to be no labels. Labels come with implications that you may not fit into. There are people in the world who are not just one thing but multiple. In reality, we may all fit into multiple boxes. The acceptance in this world of the LGBTQ world is something Miley is trying to normalize.

Miley explains that her perspective on life has grown since her young adult days. In her cover interview for Elle magazine this year Miley said,

“After the fire, I thought about how we helped more than 120 families who lost their homes. We’ve served nearly 1,300 homeless kids in Hollywood every year since 2014. And last year, we helped 270 kids find housing and provided 32,000 meals. That won’t burn down. That helped me become much more disconnected from things.”

Not only has Miley helped the world around her but she never forgets to advocate to be true to who you are.

Miley has made it a point that she does not care what people think of her but when someone comes after her character she will speak out. As you can see on her Instagram post below. People accused Miley of cheating on Liam when they do not even know what is going on with their lives or know anything of that matter. When there has been a couple like Liam Hemsworth and Miley Cyrus that America has fallen in love with for almost a decade, it is hard for people to wrap their heads around on why anything like this would happen. Especially because not long after they got married is when they decided to split. People are so invested in the lives of celebrities but not in who they are as a person. How can you accuse someone of something if you don’t know who they are? The media is what prompted Miley to even have to write something to the world in the first place. There were false rumors being broadcasted that needed to be set straight.

While being in the spotlight Miley turns her hate into positive messages which I think is hard to do. Miley knows people have criticized her for her actions but she doesn’t really care much about herself. She uses that negativity to preach to the world that people need to put this negative energy into something good instead of criticizing her for things that don’t matter. In an NPR interview, Miley says,

“I’m doing what I need to do. I’m working in my community. I’m changing the way people view sexuality. I’m working with suicide prevention programs. I’m feeding people that don’t have food to eat. I’m doing my part as a human. You better go do your part if you’re gonna even have one little opinion about what I do. You better be doing some great things for your community.”

People only talk negatively about Miley because she is different than your mainstream artist. She is not afraid to show her true self to the world.  You have to remember that Miley grew up in the spotlight. Imagine all of the pressure that puts on a little girl. As you grow you are going to make mistakes but that is part of growing up. The whole world knew what Miley was doing and that is what is different from you to her.

Everyone needs to learn something from Miley. Being yourself is the most important thing you can do. If people put hate on you it’s only because they have insecurities about themselves. Do not let people tell you who you are or what to do. That is your own decision. If people are more accepting of others and their differences, our world could truly become a better place. Change is a good thing in which no one can be the same person their whole lives. Remember that “everybody makes mistakes, everybody has those days.” No one is perfect and what you do with what you learn in life is up to you. If you spread positivity to the world as Miley has, you can help change this world for the better.