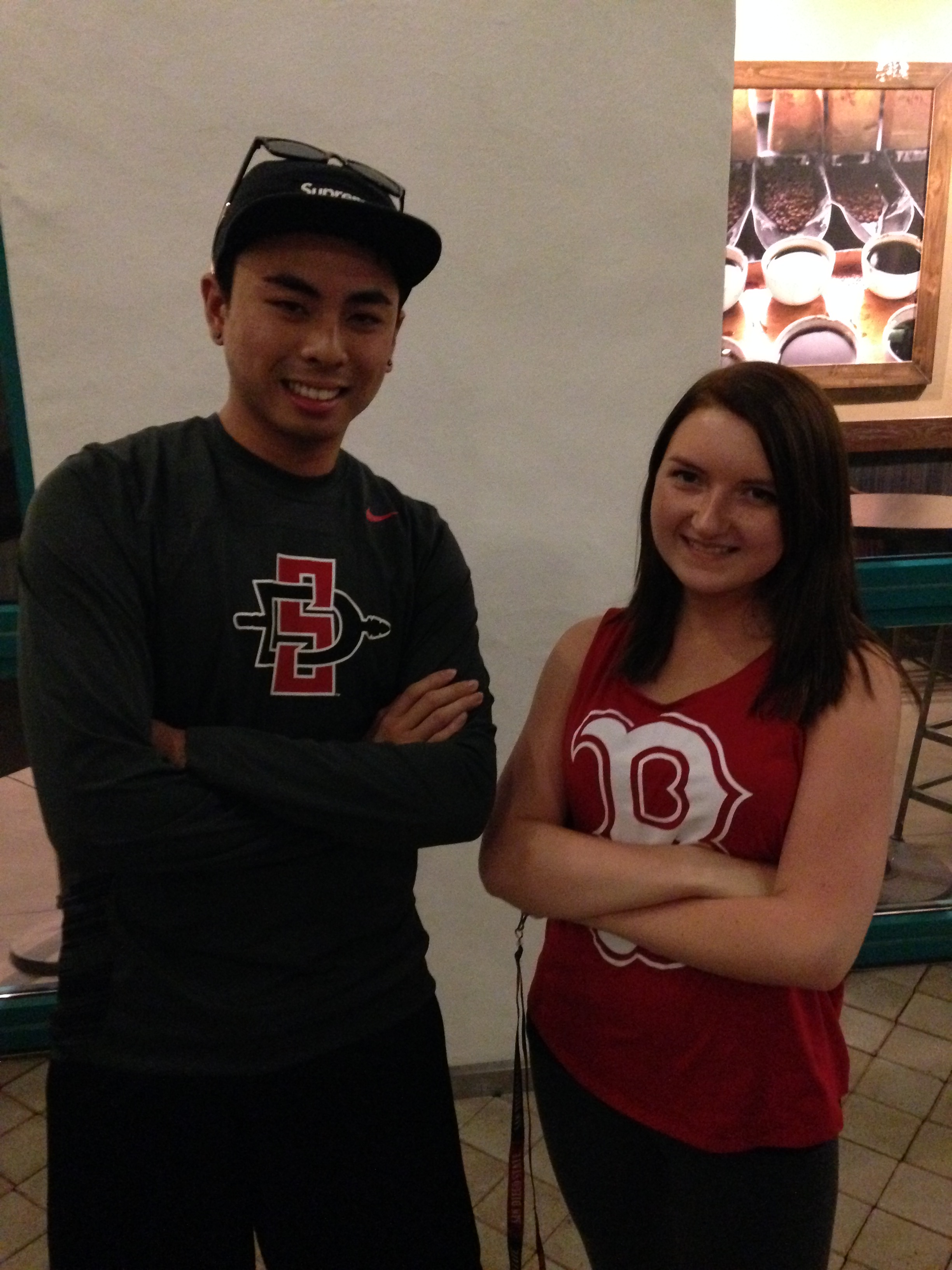 Two Thursdays ago, I sat down with Jacey Darrah and Kevin Le at the Student Union outside of Starbucks. It was a warm early November evening and the sun had already set, but it was comfortable outside. Jacey was one of the first responders when I had asked for DJ’s to sit down and be interviewed for the KCR Blog, so I was excited to sit down with her. She brought along her cohost Kevin, and it became immediately apparent that we knew each other. We realized that their show followed up my noon to one slot on Fridays. In the hustle to move in and out of the studio we always had spoken and exchanged greetings, but we never got to know each other well. It’s a bit difficult to get to know somebody in those short minutes, when I’m trying to wrap up my show and they are moving into begin theirs. We laughed it off and got down to the real interview where we finally got to properly learn about each other.

I found them to be a very agreeable duo, not just because they echoed each others statements with a complimentary “yeah.” They both appear to enjoy being on air a great deal and they have a great laid back take on sports, which can be rather high energy for many DJ’s. You’ll learn more about them from the interview, so let’s get to it!

Cameron Satterlee: Okay I am sitting here with Jacey and Kevin.

CS: Yes. Okay so could you please tell me your show and when it’s on?

Jacey Darrah: Okay, it’s called Out of Bounds with Jacey D and Kevin Le and it’s on Fridays from one to two.

CS: Alright alright. So, how long have the two of you been with KCR?

JD: This is our first year.

CS: So your first semester?

CS: Alright. So you’ve only had about seven or eight shows. So what kind of show is it? What do you talk about or play?

JD: Well we do sports but we try and focus on mostly football and basketball and then the really little sports that no one would usually talk about, like rugby or lacrosse or something like that.

KL: Yeah like club sports, you know what I mean?

KL: Swimming—not as popular as the other sports—but we try to cover everything SDSU related, so there’s that.

CS: Yeah I was about to ask if you do pro or college. I mean when you get into those smaller sports I guess you can kind of cover a lot of ground huh?

KL: We do, but as we said earlier, we like to keep things Aztec related, you know what I mean? So we focus mainly on our teams most of the time on the show so yeah.

CS: Well that’s great because, so we learned that my show goes directly into yours. I’m twelve to one on Fridays and we do (supposedly) Aztec sports but we dive in a lot to pro sports so it’s good to know that you guys are doing it.

KL: Yeah I’ve seen you guys do pro and stuff.

CS: Yeah yeah cause we lead in with Aztec sports but we end NBA and all that kind of thing. So you’re not in the sports block—the noon to one—but you’re still doing Aztec sports mostly. What made you want to do Aztec sports?

JD: I just wanted to do sports and that’s kind of what he told me, so I don’t know, school spirit.

KL: She kind of wants to be a broadcaster.

KL: Like for ESPN. So we would feel that talking about sports would definitely help fit that resume you know? And both of us are really, how would I say it, not athletic, but we love sports in general.

KL: And we could talk about it for days. So that’s why we chose sports.

CS: Yeah you’re fans, I mean we’re all fans at the KCR Sports Department. I want to follow up with that, that you want to do broadcasting, what made you want to do that?

JD: I’m really good at public speaking in front of an audience, and I really like to do it. So, speaking for ESPN maybe, I’m not sure yet. But I’d definitely like to maybe be a broadcast journalist definitely.

CS: Well that’s a great goal to pursue at any rate. And public speaking, to know you’re good at it, that’s a great talent, it’s an asset. And what about you Kevin? You’re just doing it to do it?

KL: I’m more here to support her. I like sports and again just mainly to support her. I’m not as good at public speaking as her, per se, but she asked me to do it so I was like “sure why not, it sounds fun.”

KL: So here we are, in that afternoon block, which is awesome.

CS: You could say you’re being a good sport about it.

CS: I’m sorry, I had the opportunity. So could you please describe to me how and ideal show would go?

JD: We start off with football, and we talk about the last game and the next game coming up. And then we go into—usually soccer—right after, men’s and women’s. And then we go to either swimming or lacrosse or baseball or anything like that and all the club sports. And we always end with basketball cause basketball is both of our favorites.

CS: Yeah and the basketball season is starting pretty soon, are you going to be at the game tomorrow?

KL: Did you get your ticket? I had class.

KL: You had to buy your ticket?

JD: Yeah they were all sold out.

KL: I had class when they were distributing the Point Loma and Northridge (tickets).

KL: I was kind of pissed, because I woke up late and then I was late to my first class any ways. And so people were trying to sell it to me for like thirty or fifty and I’m like “nah dude, I’m good. Watch out.”

CS: It’s an exhibition game, you probably don’t need to pay that much.

KL: I’m looking forward, towards UNLV and New Mexico. I can’t wait for those games, they’re gonna be awesome man.

CS: You’ll have to set your alarm for those.

CS: I have to say, I mean—what year are you?

CS: Alright yeah I’ve had to get up at like six in the morning for Arizona and UNLV yeah.

CS: I think they’re changing how they’re doing that. Don’t quote me on that, it might not be true.

KL: What we read is that you can only line up an hour before.

JD: Before ten. But there were people when I went there at nine-thirty.

CS: Yeah they still show up. You gotta get there early man, I tell ya. Well this is pretty interesting, so I was actually caught kind of off guard since I didn’t know you from sports. I’ve got all these music questions I’m not going to ask.

JD: Well we play a lot of music actually. About twenty minutes of music.

CS: Oh awesome! So you’ve got some kind of hybrid going on.

JD: Yeah we mostly like to do sports warm up songs and rap.

CS: That’s great. It sounds like you two have a pretty solid vision for your show.

KL: I’d say we have a pretty good blueprint going. We just don’t want to bore the listeners with too much talking so I think a good balance of both music and sports talking seems like the right equation for success.

CS: That’s great. How would you describe your chemistry as cohosts?

KL: I think, at first since this is our first semester, our first show was a little shaky.

CS: We’ve all been there.

KL: Making sure we filled those fifty-eight minutes, you know, fluidly. But I think now at this point we’re pretty good. I mean first show we needed a script to understand what we should be saying, but now I feel like we don’t need it. We can freestyle, if I may.

JD: Yeah mostly I do the main thing and he always backs me up. He’s really good at backing me up.

KL: We make the whole circle work, if I could use that as an example.

CS: That’s awesome. Thanks for sitting down to talk with me, it was great interviewing you two.

I snapped a picture of them for the blog and we parted ways. I look forward to seeing Jacey and Kevin at future sports meetings. It’s great to see the newer students getting in and throwing themselves into KCR. Many of the people I’ve interviewed have been older students like myself, so it’s encouraging knowing that KCR will be passed on to these dedicated DJ’s sometime down the road.