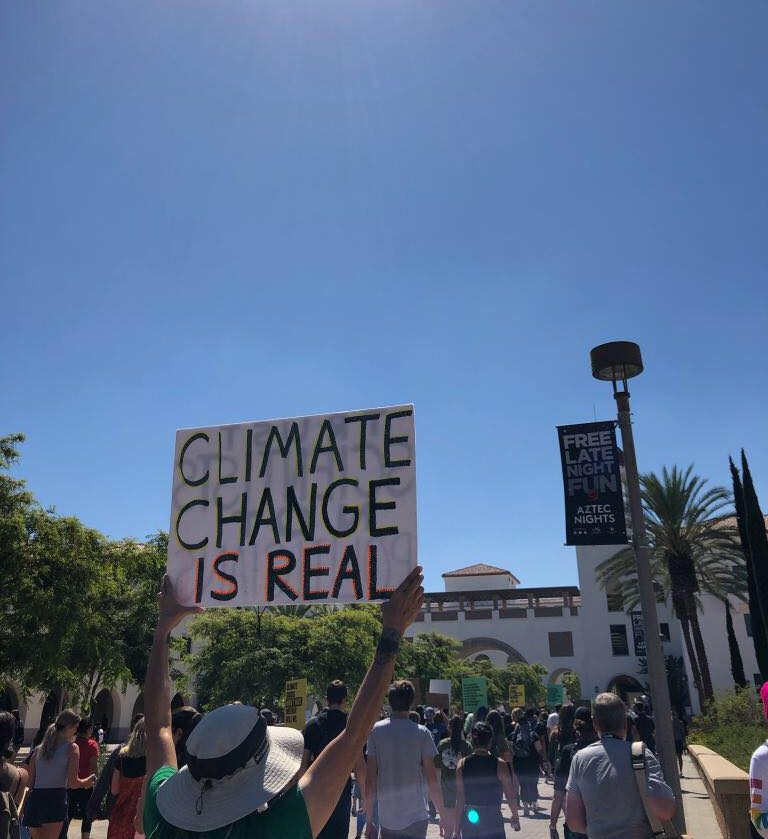 Protesters took it to the streets to advocate for more green policies and bring sustainability to the political forefront.

Students gathered to join in on the world-wide climate strike at Hepner Hall on Friday. The march surrounding climate change concerns began shortly after 11:30 a.m. as speakers took to the steps in front of the Love Library and Hepner Hall. The march route made its way from Hepner Hall to Love Library, down the courtyard near the union, and out to the Campanile Walkway ending at the Student Union.

The march had a variety of speakers that ranged from concerned students, faculty, and even congressional hopefuls. Senior, Environmental/Physical Geography major, Taylor Campbell Mosley was one of the speakers. Mosley said that her passion for climate change was centered around learning about non-sustainable agricultural practices and how it takes up two-thirds of the world’s arable land.

“I was a computer science major when I started (at SDSU) and randomly in a religion class, we were talking about indigenous peoples’ land and how a lot of it is used for animal agriculture”

Mosley explained that methane produced was a serious problem affecting our climate, and she made the transition from only caring about plastic waste to looking at the bigger picture altogether.

Common themes at the march included create and enforce an SDSU Green New Deal to achieve carbon neutrality by 2030, establish a Chief Sustainability Officer position in the president’s office to elevate climate as a priority, and finally, design the proposed SDSU Mission Valley site to be carbon neutral.

Echoing chants from the crowd rang in the air, “SD-SU, fossil fuels are not for you” and “we don’t want our power dirty- carbon free by 2030.” Creative signs—most were made from recyclable material—like a surfboard inscribed with, “the oceans are rising, so are we.”

Another common theme of the rally was the disdain towards politicians and their lack of concern toward climate change. Junior Sustainability Major Gabi Medina had a simple message for politicians:

“How can you deny it when there is science that is evidence that this is happening? I also think they are just greedy, that’s why they don’t want to act. As Sarah said up there, it is about money and it’s a huge money game and it’s time that policymakers stop thinking as far as very profit-driven, and they start thinking environmentally driven”

Overall the climate strike was a great demonstration where people of all facets came to protest something that they hold very dear to their hearts. The climate may not be fixed by tomorrow, but by judging of the amount of support SDSU has shown for their cause, as well as the support worldwide on this issue, it appears that the future of our climate is in good hands.

The origin of this strike was centered around the efforts of a 16-year-old Greta Thunberg. Thunberg started this movement by going to her parliament each week and protesting by herself, her efforts have helped kickstart climate protests in over 100 cities worldwide. Thunberg made headlines when she sailed across the Atlantic Ocean on a carbon-neutral ship to speak at the U.N. Climate Action Summit in New York.