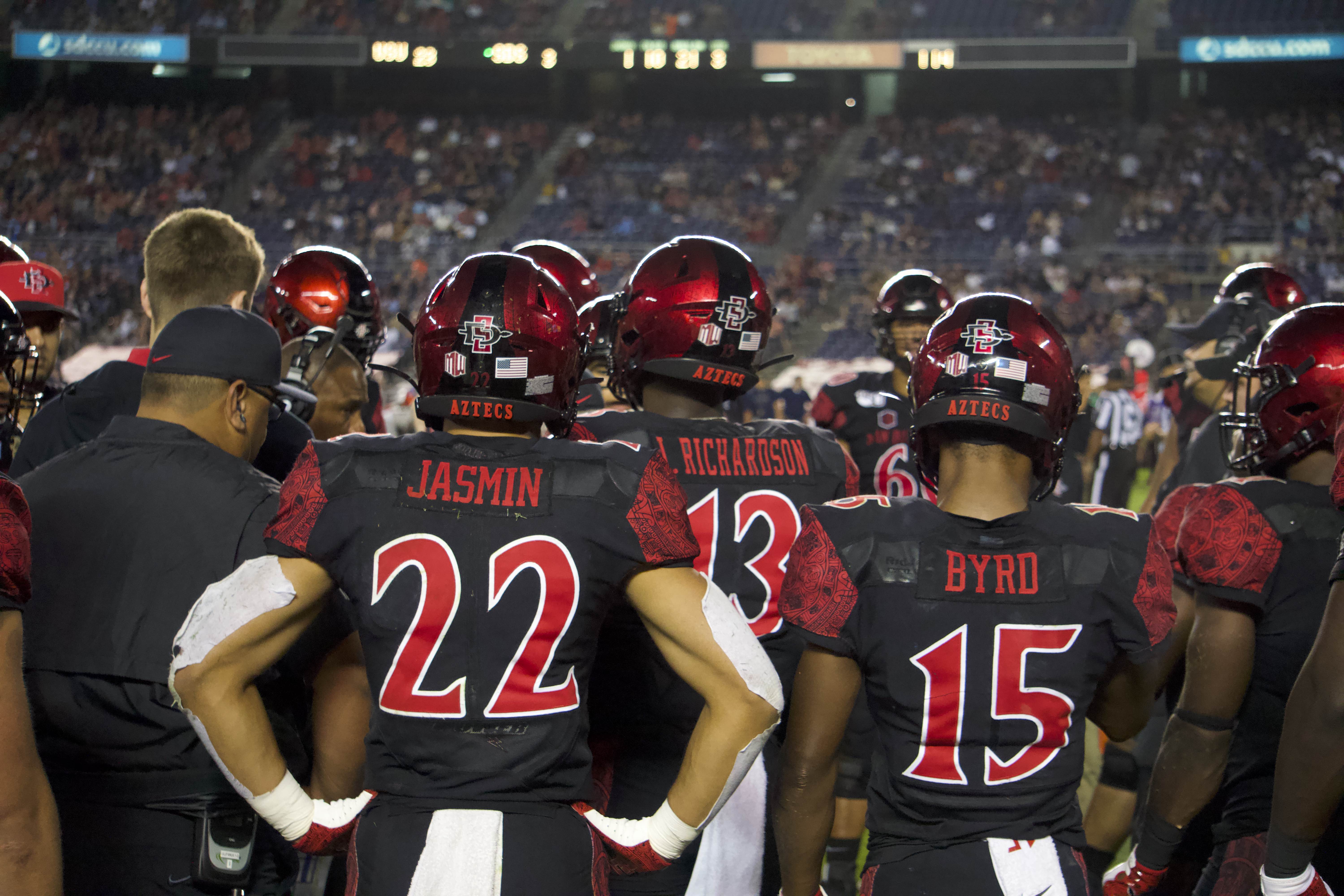 San Diego State was defeated by Utah State 23-17 on Saturday night at SDCCU stadium. For the Aztecs, it was a classic case of too little, too late.

The Aztecs only scored three points in the first half and trailed by 17 at halftime.

However, a late game spark brought the Aztecs within striking distance. After struggling for most of the game, senior quarterback Ryan Agnew threw two touchdowns in the fourth quarter and cut the Aggies’ lead to six with just over five minutes remaining. He would finish with 281 yards and two touchdowns.

One of his fourth quarter touchdowns was an across-the-body throw to sophomore Kobe Smith for 25 yards.

“That was a miracle at that point.” Agnew said, “[I] Dropped back and they played like a prevent defense so nothing was really open. I tried to buy enough time, try and find the open guy and Kobe [Smith] made a play.”

The Aggies had an opportunity at a 42-yard field goal with 1:18 left in the game, but kicker Dominik Eberle missed the kick, which kept the margin at six points instead of nine.

On the Aztecs final drive of the game, the offense failed to find the endzone and turned the ball over on downs.

“We had a play drawn up to get one across the middle,” Agnew said, “Wish I stayed in there a little longer [the pocket] and tried to deliver the throw, got to give the receivers a chance.”

SDSU led this one early with a slim 3-0 lead, but a crucial first quarter interception put the Aztecs behind the eight ball. Agnew was picked off by Shaq Bond who returned it for a touchdown.

The turnover was not the only thing that hurt the Aztecs. The team had six penalties for 61 yards, including an unsportsmanlike conduct penalty. SDSU eclipsed their average penalties and penalty yards in the first half.

“Obviously the special team’s penalties always started us in bad field position,” Rocky Long said, “I haven’t seen them on film to see if they were legit or not, but we’ll find out. I think the only real bad penalty was we got a personal foul penalty and that’s ridiculous.”

The Aggies have racked up 1,330 yards in their first two games but were held to 375 total yards against the Aztecs.

However, Long quickly critiqued his defense after the praise. When asked about how his defense played, Long did not hold back.

“Not good enough,” Long said. “It’s never good enough if you lose. We gave up some yards, but we made them kick field goals and I think they scored one touchdown on offense.”

The Aztecs were without contribution from senior running back Juwan Washington, who hasn’t played since week 1. He continues to suit up, but remains on the sidelines during games.

Asked if anything good came out of tonight Long didn’t mince words.

“Well, there’s no real positives because we lost,” he said. “I still believe our team can be a good football team and maybe we were okay tonight too because Utah State is pretty good, they got an NFL quarterback and that’s a hard thing to contend with.”

The Aztecs will look to gather themselves over their upcoming bye week and prepare for an away game against Colorado State.