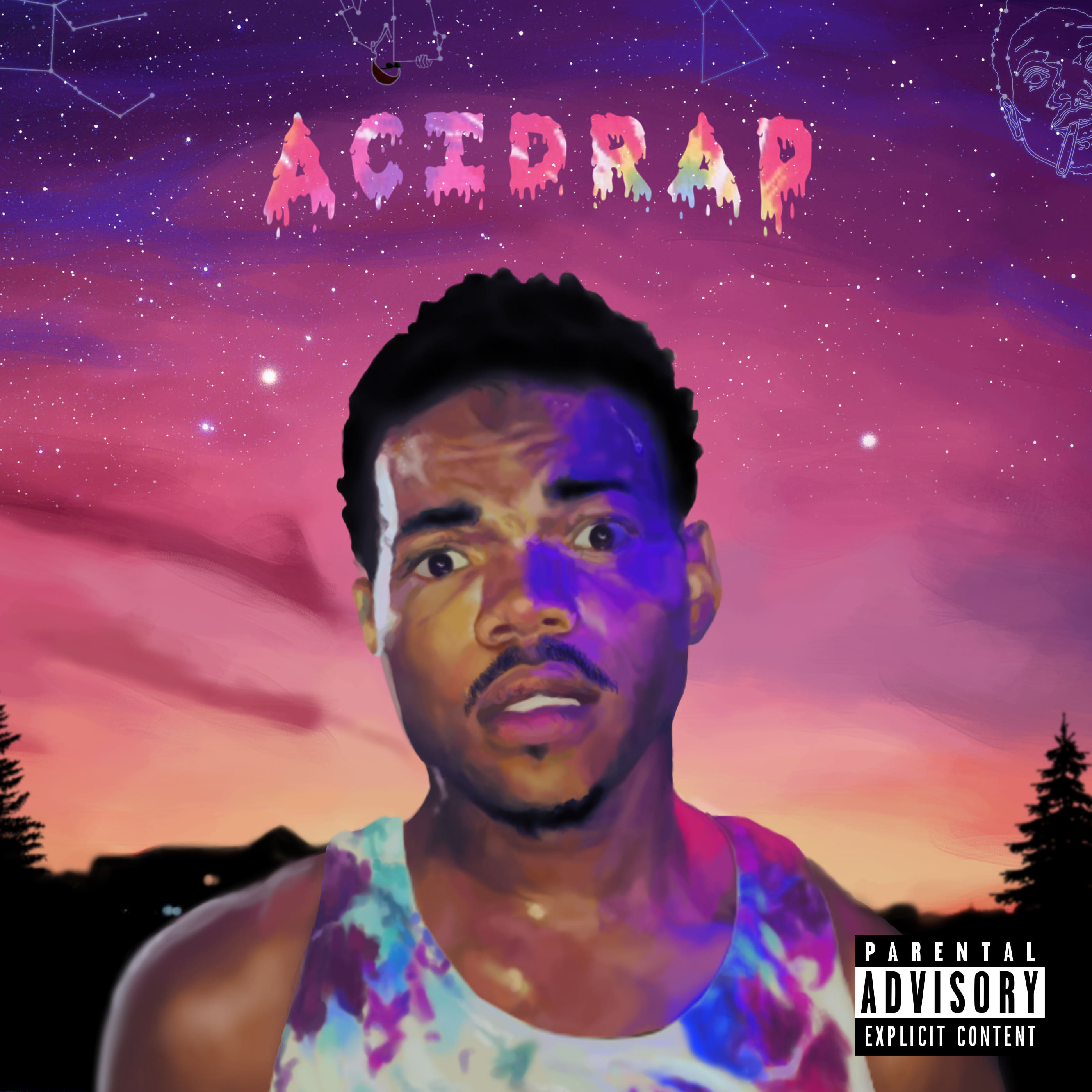 Hello there fellow tourists! I hope you all have been having a good winter so far. Since my last post I’ve done a lot of traveling and exploring, so of course that means that I have a lot of new souvenirs for you this year. Since it has been such a long time since the last Souvenir of the Week why don’t we get right to it. This week’s souvenir is the mixtape Acid Rap by Chance The Rapper.

If you haven’t heard of him before, here is a little background on Chance The Rapper. A young musician from Chicago, Chance started to work on his first mixtape 10 Day when he received a 10 day suspension from his school for “weed related activities”* in 2011. After working on it for about a year Chance released the mixtape on April 3, 2012. Later in 2012 he appeared on Childish Gambino’s track They Don’t Like Me and would open for Gambino on his 2012 North American tour. Acid Rap is Chance The Rapper’s second mixtape and was released on April 30th in 2013 for free online, since then it has been downloaded over 900,000 times on datpiff.com (where you can still get it for free). It was received with universal acclaim from music critics and was placed on many Top Album lists for 2013.

Now, before I get into what I really like about this mixtape, I’m going to acknowledge that I’m not a Hip Hop Head by any definition. As a native of the land of punk, hip hop was a very foreign concept for me up until a few years ago when I started my travels. So like all my other posts, this one is just my opinion on something I really like and want to share with others, not some expert’s critique. With that said, lets talk about this mixtape.

There are three core aspects that make this mixtape great, first of which is the quality of the mixtape’s production. Everything from the beats/instrumentals to the actual recording quality feel extremely polished and professional, especially when you realize that it was self released. Backing vocals sound very smooth, the beats/bass feel very solid, and the instrumentation can be complex without feeling cluttered and simple without being boring. Some prime examples of these qualities are the tracks Good Ass Intro, Pusha Man, and Everybody’s Something.

The second core aspect of this mixtape that makes it great is the varied subject matter that Chance raps/sings about. While there are several bangers on this album, such as Smoke Again, Favorite Song, and others where he raps extensively about weed, acid, lean, and having fun. There also plenty of songs where he discusses violence in Chicago, love, his rise to popularity, and his family, topics which can be found through out the album but also respectively in the tracks Paranoia (secret track after Pusha Man), Interlude (That’s Love), Everything’s Good (Good Ass Outro), and Cocoa Butter Kisses.

The final thing that makes this mixtape great is Chance’s lyrics and flow. With Chance covering a variety of topics throughout the mixtape and at times even in some of the tracks themselves, it may seem like he would have some difficulty conveying his message. However, Chance’s flow makes it seem like it comes to him easily, despite the fact that his lyrics and wordplay can be incredibly clever.

Even his seemingly simple verses are more complex, for example this line from the track Smoke Again “Lean all on the square, that’s a fuckin rhombus.” At first this might seem like a weird line referencing how a rhombus is a square with altered angles, but in reality it is also in reference to coating cigarettes (squares in midwest slang) in lean (codeine) something which Chance admits to having done regularly in the past. Chance’s lyrical and flow abilities can easily be found throughout ever song in this album, but some great examples are the tracks Interlude (That’s Love), Paranoia, Chain Smoker, and Everything’s Good (Good Ass Outro).

My favorite tracks off of this mixtape are Good Ass Intro, Juice, Everybody’s Something, Interlude (That’s Love), Favorite Song, Smoke Again, and Everything’s Good (Good Ass Outro). I could probably keep going on about how great this mixtape this is and go into greater detail, but I don’t want to bore you all to death and I want you all to experience it for yourself. This mixtape is great to listen to pretty much anytime and any way, however I especially recommend bumping it in a car or some nice speakers. Oh also, before I go I want to credit my friend Malcolm with introducing this mixtape/artist to me. With that said, I’ll see all of you fellow tourists next time and to quote Chance “we back!”

* Quote from this interview http://www.xxlmag.com/news/2012/09/chance-the-rapper-talks-childish-gambino-cosign-signing-to-caa-and-new-mixtape/