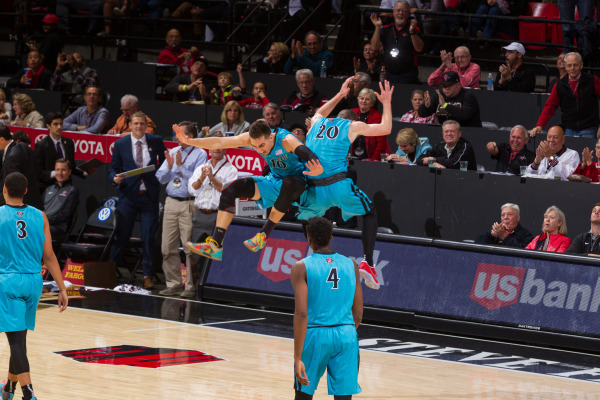 Following senior forward Matt Shrigley’s lead, the Aztecs got in front of the Tigers from the tip and never looked back.

Shrigley dropped in five three-pointers in the first half to give the Aztecs an early offensive surge, shooting 5-6 from three-point land through the first 20 minutes.

“We do it all the time in practice; take your shot, make your shot,” Shrigley said. “It is what Coach Fisher preaches, and that is what we did in the first half.”

Shrigley continued to take his shot in the second half, but he failed to put anything through the bottom of the net. He missed six shots from behind the arc to finish 5-12 on three-pointers on the night.

SDSU’s redshirt sophomore Zylan Cheatham, on the other hand, drained all of his shots from the field, going 6-6 from the floor with six additional free throws to push his point total to a team-high 18 points.

Four more Aztecs would reach double figures in the second half to pick up where Shrigley left off.

SDSU’s guards Montaque Gill-Caesar and Jeremy Hemsley added 12 and 14 points, respectively. Hemsley also made an effort to get his teammates on the board, adding a team-high nine assists to his stat line.

Redshirt sophomore forward Max Hoetzel also got involved with 15 points and eight rebounds in his second game back from a severe knee injury, and he has never felt better.

“My knee feels great,” Hoetzel said. “As you guys may know, I hyperextended it about seven or eight weeks ago and in that stretch of time we just needed time for it to heal. They were talking about reconstructing my ACL, but we were all talking together and realized that that wasn’t even necessary. But I feel great. Honestly, I feel the best I’ve ever felt athletically. Now I just have to get my wind back for the time that I missed.”

Defensively, SDSU limited Savannah State to just 10 threes, holding the Tigers to a mere 26.3 percent from behind the arc.

Prior to their matchup against SDSU, the Savannah State led the nation in three pointers per game (17.1).

The Tigers, now 0-6 on the road, will return to the Peach State to play Georgia Southern University on Dec. 1st.

The Aztecs will hit the road for two consecutive games, as they will travel to Loyola-Chicago (5-2) on Dec. 3 and Grand Canyon University (3-3) on Dec. 7 before returning to Viejas Arena to take on Arizona State (4-3) on Dec. 10th.