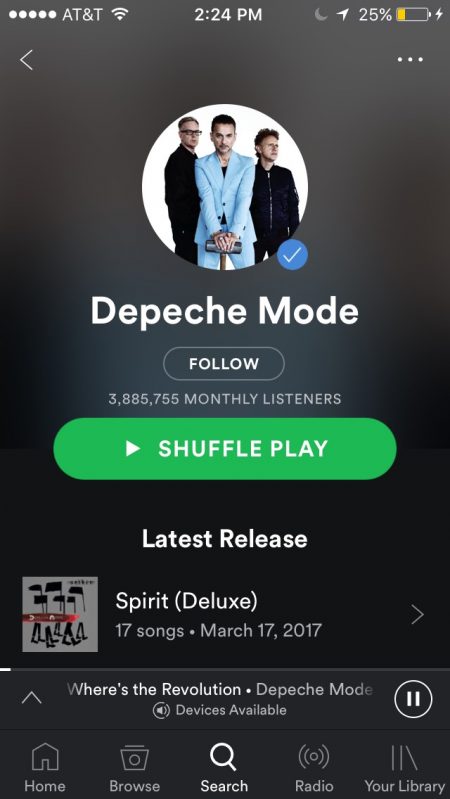 From 1977 to 1979, three English school-boys by the names of Andy Fletcher, Vince Clarke and Martin Gore were forming their own respective bands. From No Romance in China, to Norman and the Worms, neither found success. Eventually, Fletcher, Clarke and Gore would come together to form Composition of Sound. In 1980, Composition of Sound gained a new vocalist, Dave Gahan, and underwent a name change – now known to the world as Depeche Mode. Things took off quickly for the band after that, despite only having one tape to show to record labels. After releasing a couple singles without much of a response, they released “Just Can’t Get Enough,” and it instantly made the Top Ten chart in the U.K.  In 1981, they released their debut album, “Speak and Spell,” and continued to be successful from then on. Shortly after this, Clarke left and Alan Wilder filled his position as the band began to leave their futuristic pop sound and experiment with darker, ambiguous melodies. Fast forward to 1986, when Depeche Mode released “Black Celebration,” followed by “Music for the Masses” in 1987. Songs such as “Strangelove” and “Never Let Me Down” really captured the spirit of the new Depeche Mode. The group had a unique and alternative sound that distinguished them from the mainstream music of the ’80s. Just as the ’80s came to a close, the band released “Violator” in 1990, which became a triple platinum record. In that record lies perhaps one of the greatest songs of all-time: “Enjoy the Silence.”

Four years later, in 1994, Wilder departed and Gahan struggled with addiction. However, being one of the most successful bands of its time, Depeche Mode made a comeback in 1997 with the album “Ultra.” From 1997 on, the band released an album every four years. In between, they completed massive world tours and even released a DVD called “Live in Berlin,” directed by famed photographer Anton Corbijn.

In March of 2017, the band was trending because the vocal white nationalist Richard Spencer called them the band of the alt-right. Of course Gahan shut that idea down in an interview with USA Today, calling Depeche Mode “weirdos”  and the “exact opposite of the alt-right.” Graham’s statement was easily backed up with the release of their new album, “Spirit,” from which they used the track “Where’s the Revolution?” as the main single.

Unexpectedly, Depeche Mode announced their Global Spirit Tour and now has thousands of fans freaking out (myself included). Luckily, they will be making a stop in San Diego, exactly four years from the last time they were here. If you’re lucky enough to find tickets, I suggest making a swift a purchase because it is an event that shouldn’t be missed.