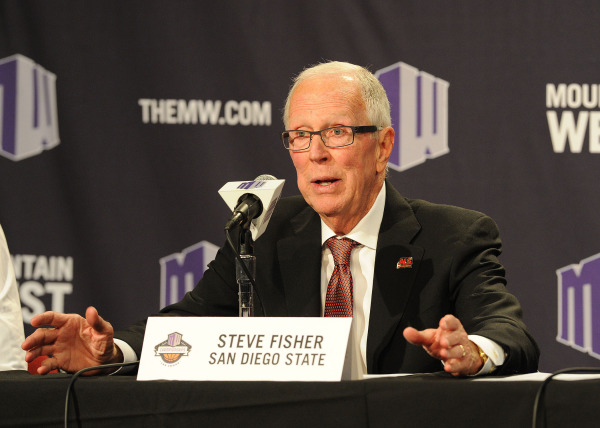 It’s the end of an era on the Mesa, as longtime San Diego State men’s basketball head coach Steve Fisher plans to announce his retirement.

An 18-year coach with the Aztecs, Fisher informed his players, fellow coaches and SDSU’s president Elliot Hirshman of his decision to retire on Monday, per Mark Ziegler of The San Diego Union-Tribune.

Stepping into Fisher’s sizeable shoes, longtime assistant coach Brian Dutcher is expected to take the reigns from Fisher entering the 2018 season. Dutcher has worked beneath Fisher’s tutelage since 1989, as their partnership dates back to their ’89 title with the University of Michigan.

The Aztecs’ current players are comfortable with Dutcher stepping into the limelight and believe he is the best option to take over such a successful program, per source.

Prior to stepping onto the Mesa, Fisher signed arguably the best freshman class to ever touch the college hardwood with Michigan, the infamous Fab Five. He also reigned in three regional championships during his nine-year stint in Ann Arbor.

Fisher then took his talents to SDSU, a decision that would fundamentally change the Aztecs’ men’s basketball program for the better.

Looking forward, Dutcher will not have the smoothest road to success in San Diego, as there are many pressing areas of concern that must be addressed before the Aztecs get back to the winning tradition Fisher cemented in San Diego. The Aztecs are coming off a measly 19-14 season where they finished 9-9 in conference play and lost to Colorado State in the MW tournament.

While it is true that Dutcher and the Aztecs have a lot to work on this offseason, this day will be spent honoring the best head coach SDSU has ever seen. Fisher leaves SDSU with an all-time record of 386-209 (.649), two Sweet 16 appearances, eight overall NCAA tournament appearances and four MW Coach of the Year honors. He was recognized as the Naismith college coach of the year in 2011 and earned the Wooden Legends of Coaching Award in 2015.

A press conference is set for this Tuesday to formally announce his retirement and introduce Dutcher as the new head coach. After that, Fisher will ride off into the sunset of retirement.