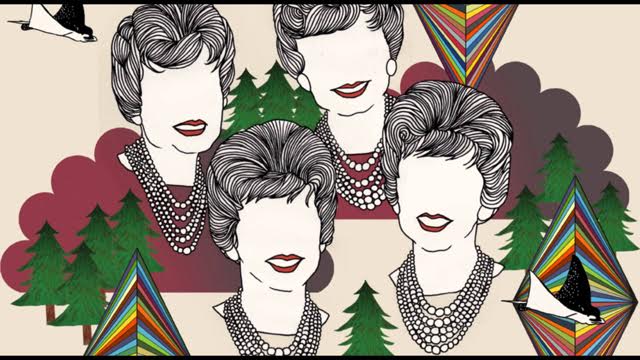 Hey-O and happy Wednesday to you weirdos and whatnots. After a long winter and lovely El Niño, I’m back in action here at KCR.  I couldn’t be more stoked, because this girl will be ~blogginq weekly!~(◕‿◕✿) If you don’t know, it’s me, Lala. Nice to meet you. You’ll be seeing me here every Wednesday, and not only do I talk music, I play it too! You can listen to me on KCR, Wednesdays from 3-4pm.

In moving on to more important things, let’s get to the actual music yeah? Today you’ll be receiving a little lesson on a band known as STRFKR. (Yes, you read that right, now sound it out children.)

Formed in 2007 in Portland, Oregon, STRFKR is a four man band full of indie rock with tones and hints of electro pop. After reaching success in 2008 through their self-titled debut album, STRFKR’s other notable album is their most recent release, Miracle Mile in 2013.

Now you might ask me, “2013? C’mon! The wave of indie rock is dead and gone, I want that new new.” But read the next line very carefully.. STRFKR has recently dropped a single called Never Ever. *gasp here* So rejoice! The release of this single should hopefully be an indicator of a 2016 album.

You may be thinking, “so what if there’s new indie rock, it still sucks.” To which I respond: You’re very wrong. The trend of indie rock and pop (RIP 2009-2013) was a time of sugary hooks, washed out vocals, and lots and lots of hand clapping. While it may seem silly, and you may seem too cool; indie rock is FUN. Have you heard Rawnald Gregory Erickson the Second? Don’t tell me you’ve never jammed to the catchy tune that helped STRFKR reach their fame.

Some of the most fun I’ve had has been dancing like a fool to funky rythyms from the genre formally known as indie rock. And isn’t music about having fun and enjoying yourself? There is no shame in belting out every intelligible word to the catchy hooks, and clapping to every beat of those random bridges. Which is exactly why you should be hyped for new STRFKR.

STRFKR also came to San Diego last week with Com Truise! The two played at the North Park Observatory on February 12th, and let me tell you, it was a blast. Synthy vibes and a complete evening of jamming, STRFKR may not be the most technically astounding band, but they’re a good freakin’ time. That’s all what we’re really here for anyway, fun times with the tunes.

Below I’ve provided some of the best and new STRFKR tunes, take a listen yo! ❃