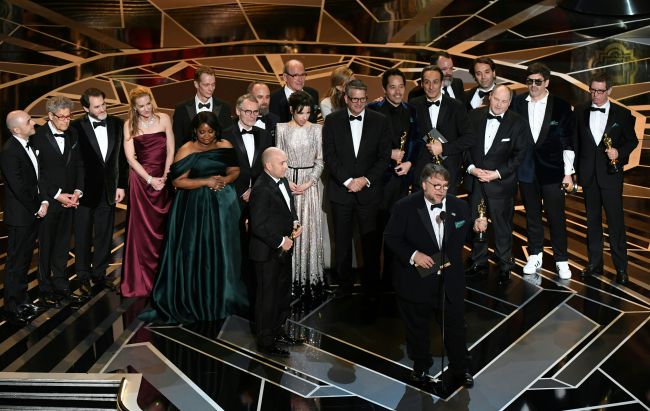 On March 4, the Dolby Theatre in Los Angeles held the 90th Academy Awards, which was hosted by late night television host Jimmy Kimmel.  Kimmel opened the Oscars ceremony with a monologue that called out several nominees, such as Jordan Peele, Timothee Chalamet and Margot Robbie.  He additionally made jokes and remarks about last year’s Oscar envelope mix-up, President Trump and Mike Pence, and about how “clueless” Hollywood is about women.

Kimmel then proceeded to discuss the large amount of sexual harassment claims in the past year, the #MeToo and #Time’sUp movements, and how positive change is currently taking place for women and African Americans, through movies like “Wonder Woman” and “Black Panther.”

After Kimmel’s monologue, a black-and-white video displayed Hollywood celebrities like Mel Gibson and Harvey Weinstein, to follow up on celebrities’ sexual harassment in the workplace.

The stage was decorated by Derek McLane who used 45 million crystals to represent each era in the history of movie making.

The night consisted of musical performances throughout the show, from songs that were nominated themselves to songs from nominated films.

In addition to Pixar’s “Coco” winning Best Animated Feature, the film won Best Song for “Remember Me.”  The song was written by Robert Lopez and Kristen Anderson-Lopez. Anderson-Lopez also wrote Frozen’s “Let It Go.”  The award-winning single was performed by actor Gael Garcia Bernal, R&B singer Miguel and singer Natalie LaFourcade, while being accompanied by a string of guitars and Mexican folk dancers.

History was made when Daniela Vega, the first openly transgender woman presenter in Oscars history, introduced Sufjan Steven’s performance of “Mystery of Love” from Luca Guadagnino’s, “Call Me By Your Name.” Stevens rose from the ground at the beginning of the song, alongside St Vincent, Chris Thile and Moses Sumney.

In addition, rapper Common and Andra Day performed “Stand Up for Something” from “Marshall,” with a powerful call to action towards the end of the song. They were joined on stage by 10 activists, including Bana Alabed, Cecile Richards of Planned Parenthood, civil rights activist Dolores Huerta, an eight-year-old Syrian refugee who tweeted about Aleppo, and a transgender activist.

“This Is Me” from “The Greatest Showman” scored a performance spot at the Oscars, which was performed by actor Keala Settle and co-written by Benj Pasek and Justin Paul.