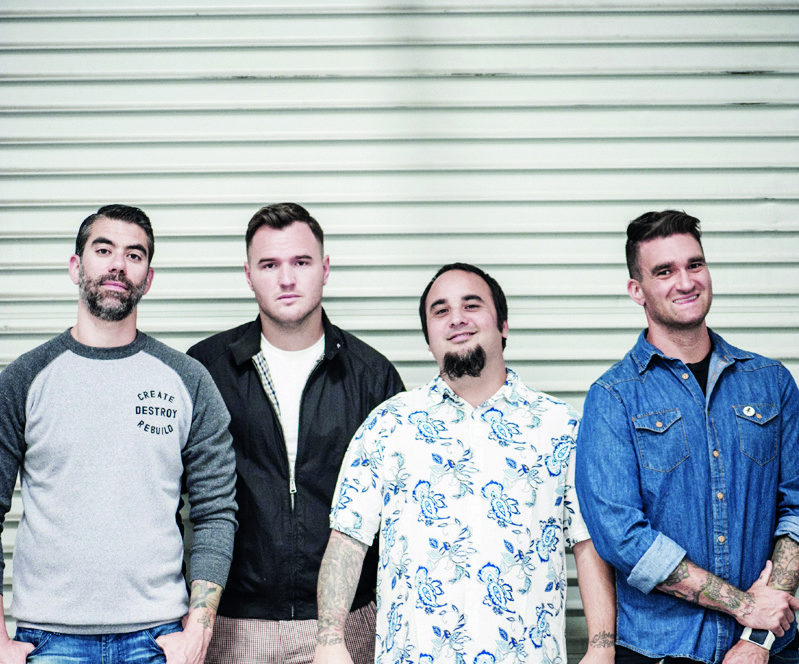 Happy Wednesday, everyone! I hope you are all gearing up for Thanksgiving tomorrow and a nice lil’ break from exams, papers, and everything school related. This week’s neighborhood jams is really special – last Sunday Yellowcard and New Found Glory ended their 6-week tour HERE in San Diego to a sold out crowd at the House of Blues downtown… and let me tell you, it was more like a party than a concert.

Veteran pop-punk rockers Yellowcard and New Found Glory were both co-headliners for the tour and Tigers Jaw opened up for them. Tigers Jaw is an indie-rock band from Scranton, PA consisting of Ben Walsh and Brianna Collins.  Lead singer and guitarist Walsh resembled the same vocal and lyrical earnesty that the headliners are known for. Yellowcard closed out the night’s show after playing well over an hour. The band featured many songs from their 2003 album Ocean Avenue, and the crowd sang each lyric with so much passion. Lead singer Ryan Key and violinist Sean Mackin performed some acoustic, low-key versions of songs with just a keyboard and violin – it was truly beautiful. Now before Yellowcard took the stage, New Found Glory got the crowd pumped up.

While the stage got ready for New Found Glory I couldn’t help but notice the sold out crowd making their way closer and closer to the stage – everyone wanted to be as close as possible. The band opened with Resurrection, Understatement, and Hit or Miss. It was great to see them perform songs from older albums, like their 2002 album Sticks and Stones and also their newest album Resurrection: Ascension which was released October 9th of this year. The crowd went wild for every song; crowd surfers were lifted and sent soaring towards the stage; there was never a dull moment. Lead singer Jordan Pundik constantly kept the crowd entertained, jumping and running from one side of the stage to the other. Pundik seemed to always have his hands reaching out to the crowd. A great characteristics that I noticed about New Found Glory was their dedication and love towards the fans – you could really tell that they wanted to please the crowd with their tunes.

One of my favorite songs, which is also their single from their latest album Resurrection: Ascension, has a real special guest – Hayley Williams from Paramore. Together they have the hit song Vicious Love, and when New Found Glory’s lead guitarist Chad Gilbert and drummer Cyrus Bolooki broke out Vicious Love‘s melody the crowd lost it. There was so much energy on the stage and in the audience – you couldn’t help but feel like a true rock ‘n roller. When New Found Glory ended their set with one of their most famous songs My Friends Over You there was not a still body in the room. Everyone was jumping up, singing loudly, and then basking in confetti shooting off from the stage. This concert was one of the best concerts of my life – I don’t know if it was because it was their last show of the tour, or if because my high school self was full-fledged that night. But I didn’t want their set to end. Thank you, New Found Glory for sharing your rock ‘n roll talents, and if you guys are ever in need of a new confetti shooter person – let me know.