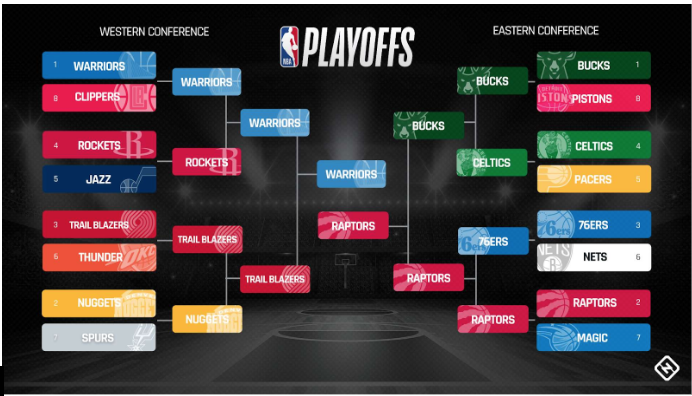 Thus far, the NBA Playoffs has been pretty predictable, but still very exciting. Tomorrow, the NBA Finals begins with the back-to-back champions, the Golden State Warriors looking to go for a three-peat against the Toronto Raptors.

Let’s take a look back at how these two teams got to the Finals; The top-seeded Golden State Warriors were able to get past the Los Angeles Clippers in six games, despite losing center Demarcus Cousins to injury. Warriors’ forward Kevin Durant got past the Clippers and was one point shy of recording an NBA-record for most points scored in the first half of  playoff game. He did this in game six by tallying 38 points. Durant would finish with 50 points in the Warriors’ close-out game. Although Durant could not quite make history, one of his teammates did.

The two-time Most Valuable Player and Warriors’ Captain, Stephen Curry passed Ray Allen for made 3-pointers in the playoffs in game one, which he finished with 38 points and made eight shots from beyond the arc.

The Toronto Raptors entered the playoffs as the No. 2 seed in the Eastern Conference and was able to hold off the No. 7 Orlando Magic in five games. The Magic was able to pull off a game one upset win in Toronto, but the Raptors would win the next four.

The Raptors have been on the rise. They were the best team in the Eastern Conference last year and lost to the Cavaliers in Round two. After trading a star (DeMar DeRozan) for another star (Kawhi Leonard), it elevates a franchise to win more. Even though the Raptors have former SDSU Men’s Basketball player, Leonard, the difference maker is Kyle Lowry.

In the loss to the Magic in the first game, he did not score and was 0-6 beyond the 3-point line. But in game two, Lowry would give the Raptors 22 points in the 111-82 blowout at home.

Not saying that Leonard is not good (I mean he is one of the best players in the NBA), but it is Lowry who was drafted by the Raptors and been a part of the organization for seven years while getting the Raptors over the ‘hump’ against teams. He knows the fans, the fans know who he is and when a player becomes a franchise player, like Curry, like Kobe Bryant, and like Dwyane Wade (in Miami), they step up and change the culture of the franchise.

Round two of the playoffs featured a rematch between the Warriors and the No. 4 Houston Rockets. Both teams were able to hold home-field advantage from one another through the first five games.

However in game six, the Warriors lost their superstar, Kevin Durant to a right calf strain, but the Splash Brothers of Steph Curry and Klay Thompson combined to score 60 points and overpowered the Rockets’ backcourt of Chris Paul and James Harden, winning 118-113 on the road.

With the road victory, the Warriors secured their 21st straight series win with at least one road victory. The Rockets kept saying all year long about how they were going to take down the Warriors.

The Raptors played a good Philadelphia 76ers team in the semifinals that had a starting five, similar to the Warriors, led by center Joel Embiid. In addition, they had Ben Simmons, Jimmy Butler and Tobias Harris.

In seven games, the Raptors would be the team to win all four games, but it was Leonard to put the icing on the cake.

He went from the top of the key to the baseline, right in front of the Toronto bench and nail the shot at the buzzer, making him the only player in NBA history to hit a buzzer-beater to win game seven. Not only did he make the shot, but the ball bounced on the rim not once, not twice, but three times, just to make the play more intense.

In the Conference Finals, the Raptors faced the top-seeded Milwaukee Bucks and the Warriors faced the No. 3 Portland Trailblazers. The Warriors secured home field by winning the first two games of the series. Warriors’ head coach Steve Kerr called the game two victory, “a steal.”

For the first two games in Milwaukee, the Bucks were able to also hold home field over the Raptors with Bucks’ Brook Lopez hitting a key three-pointer to seal the game one victory.

When it was Portland’s turn to play in front of their home crowd in both games 3 and 4, they would get out to big leads, but would lose it in the second half of both games and get swept to the reigning champions.

The Warriors were used to being down and finding a way back to ignite a push for the win. Remember last year in the Western Conference Finals against the Houston Rockets when they were down in game six facing elimination and came back to win. In addition, it also came in the following game in a game seven, where the Warriors had to do the same thing, but on the road to win the game and the series.

Warriors’ guard Stephen Curry, who averaged 36.5 points in the series, and Portland’s Seth Curry became the first brothers to play each other in a Conference finals series.

The Eastern Conference Finals series was not like the Warriors sweeping Trailblazers in the West. After being down 2-0 in the series, the Raptors were able to win game three in two overtimes with Leonard keeping them in the game playing 52 minutes, the most he’s ever played in a game. The Raptors would take over for the rest of the series. They overpowered the Bucks and would win a total of four straight games, en route to winning its first Eastern Conference Finals series in franchise history.

Now it is time to see who will heist the Larry O’Brien trophy. It all comes down to this series between the Golden State Warriors and the Toronto Raptors to determine will be named the 2018-19 NBA Champions. The Warriors, who have made it to the NBA Finals for a fifth straight year, look to win the title and bring another championship back to the bay area and in the final season of Oracle Arena. Will the Warriors be able to defend the title for a third consecutive year and be the first team to three-peat since the 2001-02 Los Angeles Lakers with Kobe Bryant and Shaquille O’Neal? Or will the Raptors win their first championship since joining the NBA and overthrow Dub Nation’s reign?

Here’s my prediction: Warriors in 6 games;

With or without Durant, the Warriors have the experience with Steph Curry, Klay Thompson, Draymond Green, Andre Iguoudala and Shaun Livingston. The Warriors, whether they are the favorites or not have the ability to win. This is the final year at Oracle Arena, home of Dub Nation for the past 47 and they will send Oracle the right way: a championship in the final game, game six.