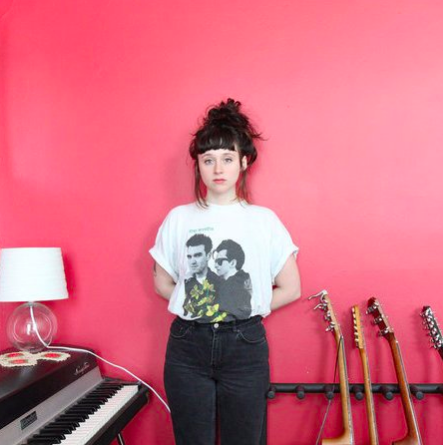 Hello! Aurora here with another female artists straight killen it. Katie Crutchfield is a musician who grew up in Alabama, but has been able to travel and tour around the world.

Katie and her twin sister Allison Crutchfield formed their first band, the Ackleys, in high school.  The members of the band ended up going to different colleges  which resulted in the bands split. Then the sisters started pop punk band  P.S. Eliot in 2007 in Birmingham, Alabama which featured Katie on the guitar and vocals and Alliison on the drums. P.S. Elliot released two albums on Salinas Records Introverted Romance In Our Troubled Minds in 2009 and Sadie in 2011. They ended up breaking up soon after the release of the second album.

After the break up Katie started Waxahatchee and Allison started Swearin‘.

Katie named her indie music project Waxahatchee after Waxahatchee Creek in Alabama. The debut album  American Weekend had already released before P.S. Elliot had split up as a split cassette by Don Giovanni Records. She wrote and recorded the album in a week in her family home in Alabama. It ended up getting a great response.

Katie then picked up her bags and moved to Brooklyn. Her second album, Cerulean Salt, released in March 2013. Soon after on Wichita Recordings in the UK the album reached #1 on the Official Record Store Chart for the week of July 13, 2013. She received high praise from critics including a score of 8.4 from Pitchfork

Waxahatchee opened for  Tegan And Sara on their UK tour, before playing a headline UK tour in October. Katie then signed to Merge Records for North America and then Ivy Tripp released in April 2015. Her voice is soothing and the rifts are very mellow. She’s great to listen to when you want to relax.