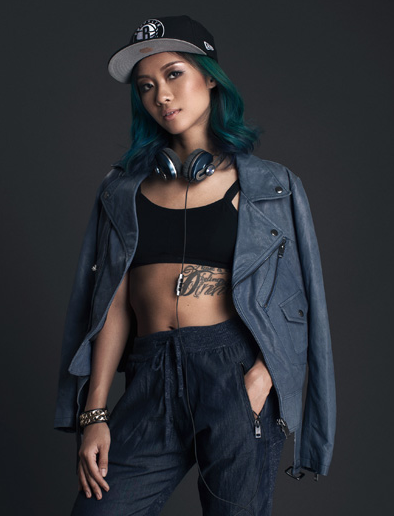 Yo! My name is Aurora and I’m back this semester with MUSICOLOGIA FEMINISTA. This week I am going to be talking to you about a woman who is standing against the norms to bring the world music they have never heard before. Hàng Lâm Trang Anh or better known by her stage name Subo is a young rapper from Vietnam who has put in a lot of effort to become successful as well as respected.

Suboi was quite shy at an early age and began writing poems in her free time. As she got older she turned to music for guidance. She fell in with love hip hop at the age of 14 and perfected her English by listening to famous American rappers. She later started to become well recognized in Vietnams underground hip hop scene.

Suboi has worked hard to perfect her style and message. She says there are two elements to becoming a successful rapper. To never give up and listen to others’ advice and learn. A struggle female MC’s  face that is often not taken into consideration is trying to get over the image of being a “female rapper” instead of just a rapper. Not that gender is minimizing her in any way, cause her flow is undeniable, but why does always have to be the topic of conversation. It just expresses the inequality between male rappers who aren’t referred to in this way.

The rap industry, as much of the music industry, had had its issues with gender stereotypes and inclusiveness. There has been people, ever since hip hop began that believe that  rap is exclusively a male genre. We absolutely know that that is not the case with artists such as Lauren Hill, Queen Latifah, Nicki Minaj, MC Lyte and countless other females who have been successful in this music genre. Not only were they successful but their moves were revolutionary. Yet people still seem to be surprised when they hear a girl can spit mad bars. Why is that? Suboi is always questioning this, especially in her country where some people still believe that rap is only for men. She keeps striving just as the people who came before her to not only prove her place, but to bring something new to the industry that gave her a home.

Suboi is just only one example of the many women who are striving to become successful rappers in a male dominated genre. At the end of the day, rap is nobody’s to claim and we will keep hearing female MC’s forever. You can believe that.