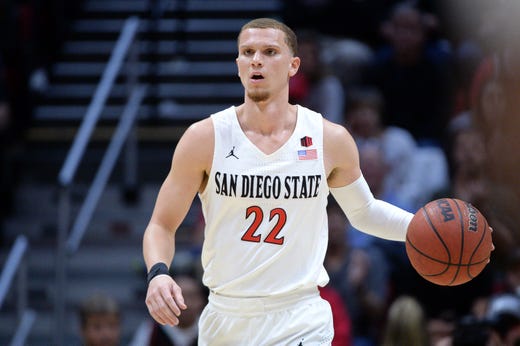 “We didn’t want another one, [loss] especially on senior night.” Junior Matt Mitchell said, “We wanted to get our seniors out with a win.”

The Aztecs beat the Rams 66-60 in their home finale to improve to 27-1. The team wanted to send their seniors out on the right note, but cold shooting nearly doomed the Aztecs. This was their second straight game of making less than 40% of their shots from the field.

“When Malachi [Flynn] is 0-for-6 from the field and he’s your best player it’s going to be a struggle,” Head coach Brian Dutcher said, “The thing I like about our team is, we can still win when we don’t shoot the ball well because our defense is so good.”

San Diego state shot 35% for the game and 33% from three point land. Strong defense, especially in the second half propelled the Aztecs to their 27th victory on the season.

“We didn’t want to lose two in a row,” Junior Malachi Flynn said. “We buckled down on the defensive end and people made shots.”

With 57 seconds left, Rams’ guard Isaiah Stevens made two free throws, which cut the Aztecs’ lead to just two. After a stop by the Aztecs, and a stop by the Rams, a jump ball was called and possession was awarded to the Aztecs.

CSU was forced to intentionally foul Mitchell, who made two free throws to ice the game and begin a new winning streak for the Aztecs. He finished with 15 points and the Aztecs made 17-of-20 free throws on Tuesday night.

SDSU’s defense kept them in the game, as the Rams only made 28% of their second half shots and went 1-for-10 from the three point line. In the first half, the Rams shot 50% but still only led 36-34 entering the second half.

Jordan Schakel started off the second half with a steal and a lay up, then he hit a three pointer to give the Aztecs a 57-56 lead with just over four minutes remaining. He finished with 11 points and four rebounds.

Flynn’s first field goal didn’t come until five minutes into the second half, however he made a big time three pointer with three minutes remaining to extend the lead 62-56. Flynn ended the game with 17 points.

The Aztecs bench was outscored by 10 points after 20 minutes and they allowed 14 points inside the paint during the half. SDSU allowed 24 points in the paint for the game, but their bench ended up outscoring the Rams by three.

Mitchell scored 13 points in the first half, but his teammates struggled from the field during the half. SDSU made 35.7% of their first half shots and went 6-for-17 from three point land. Flynn was 0-for-6 in the first half and 0-for-4 from deep in the half. He finished the game 4-for-14.

The Aztecs will play at Nevada on Saturday before embarking on the Mountain West tournament in Las Vegas.