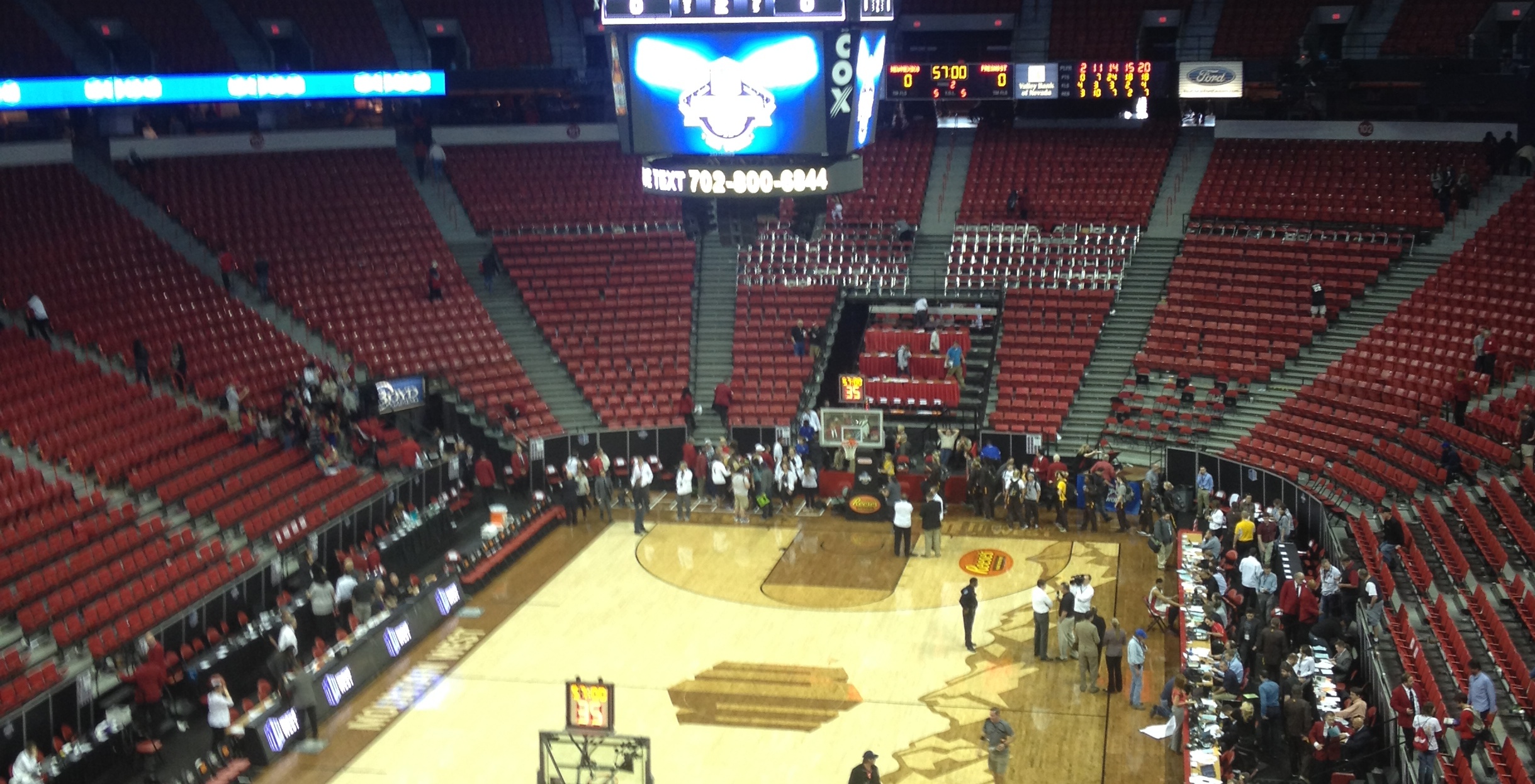 In June of 2010 as I was sprinting through John F. Kennedy International Airport in New York City, the strap hinge on my suitcase-bag broke under the weight of souvenirs and my bag fell onto the floor.

On Wednesday of last week, I trusted that same bag with my nicest clothes, pants and shoes as I furiously crammed them inside before leaving. Leaving where? Las Vegas, Sin City, Neon Desert, whatever you want to call it.

KCR Sports Director Matt Bain and myself were going on a road trip as part of our duties with The Daily Aztec, which included covering the San Diego State men’s basketball team (because by the time we got there the women’s team had already been eliminated) at the Reese’s 2014 Mountain West Conference Championships on the campus of UNLV, which we would find to be pretty ugly.

Matt got out of his class at 1 p.m. on Wednesday and sprinted to his apartment to pack his things so that we could get on the road and start our adventure. I think we officially left at 1:30. My boredom took over on the 5-hour drive, so I took lots of selfies and videos of us commenting on stupid things like a billboard. After driving for and hour and a half, we began to wonder why I-15 northbound wasn’t a huge desert like everyone had told us.

Well, as soon as we got over this one hill it became all desert, but in a beautiful way. There’s something about dirt and sand stretching for miles on end that appeals to me in an odd way, as its nothing I’ve ever seen before since I came from the land of trees (Castella, Ca…google it).

Earlier in the week, I had called my brother, who lives in Las Vegas, and asked him if we could hang out there while we waited for our editor to check in to the hotel, since neither Matt nor I were 21.

After some princess-playtime with my 3-year-old niece, Matt and I went to the hotel. We got some grub on the Strip at this burger place that was kind of hidden. It was delicious and there was so much food that we couldn’t take back to the hotel because apparently a mini-fridge is less important that a min-bar.

We drove over to the campus of UNLV and immediately wondered who in their right mind would go to school there. It wasn’t appealing. Eventually we made it to the arena, called the Thomas and Mack Center, got our press credentials and settled into our press-row seats by the court for the Aztecs noon tipoff against the Aggies.

It wasn’t even close. SDSU was up 36-15 at halftime and none of the starters played more than 27 minutes. The crowd was also predominantly Aztec faithful, as chants of “I Believe” and “Uprising” filled the arena multiple times. 73-39 Aztecs was the final score and a date with hometown UNLV was looming.

After the press conference, everyone else (the photo editor and sports editor were also in attendance as part of the coverage team) went to the hotel, but I caught the UNLV-Wyoming game before walking over to the hotel to frantically work on my story for JMS 310W.

Matt and I stayed up till 2 a.m. finishing our stories after running around the Strip trying to find cheap food. We settled on a delicious kebob shop.

We woke up at 9, finished our stories and turned them in to the internet. I went back to bed at 10 and woke up at 11:30 and headed out to the pool/resort area to join the other Daily Aztec editors who had made the Las Vegas trip. After some sunbathing, of which Matt was busy writing something else and did not attend (Matt, by the way, spent almost every minute of downtime writing something for somebody. I swear, that guy is four months younger than me and does 10 times the amount of work of anyone. Someone please hire him), Matt and I headed to the arena to catch some of the women’s semi-final between Fresno State and Nevada, and to get some work done.

The game with UNLV started and although it was a home game for the Rebels, their fans sure were quiet. UNLV got out to a 7-0 lead before the Aztecs pulled it together and led by as many as 13 in the second half.

Thames finished with 17 points, but was outscored by Dwayne Polee, who came off the bench to score 18. Final score was 59-51, and the Aztecs were headed to Saturday’s championship game.

Matt and I stayed to watch New Mexico play Boise State, the winner of which would play SDSU. New Mexico’s fans traveled in packs (which is a pun because their mascot is the Lobos) and they’re all extremely loud. That being said, Boise State still put up a fight but the Lobos came out on top 70-67.

The game started at 3. We got to the arena at 2:15 and were welcomed by a scene of crazy Lobo fans tailgating, hooting and hollering.

The arena was packed. At least 16,000 people with 11,000 of them being Lobo fans which vocally outmatched the Aztec faithful.

For that game I was taking photos, so I sat courtside. Before the game they had a pyrotechnic show which left the arena full of smoke and the first 50 pictures I took had a hazy background, which was awesome.

The game itself was a spectacle. Back-and-forth to the very end, with the extremely loud New Mexico fans cheering their team on at every possible venture and the Aztec fans unable to be heard.

New Mexico won 64-58 after Kendall Williams hit a deep 3-pointer with 14 seconds left in the game and the Lobos leading by two. That was the nail in the coffin despite the roof being blown off from all the noise.

The next problem for me was looming: my USB ports and SD card slot didn’t work on my computer or Matt’s, and we were all that was left on Saturday night. My photos would not make it to the internet on Saturday despite the numerous emails from the photo editor and sports editor.

DAY 5: Back home, luck of the USB and a nearly-missed bus.

We left at 9:30 in the morning and by 11:30 I was getting emails out in the middle of the desert asking where the photos were. Apparently everyone expected there to be internet out there. Matt and I had planned to take a bus from Irvine (he had to drop his car back at his house there) back to San Diego at 1:30 in the afternoon, so we were a little crunched for time.

I got an email from the photo editor, the deadline to upload the photos was 5:30 that evening. So the stage was set for a dramatic finish. There was one last hope as we got to Irvine at 2: that my USB ports would magically work, as they were prone to work about once every month.

We stumbled out of the Nissan (literally stumbled) into the Best Buy parking lot, where I bought an SD card reader. We found the nearest internet and somehow it work and I got my photos sent.

We barely made it, and I mean BARELY. We got home at 7 after the long bus ride and the long trolley ride.

It was a fun trip, lots of good experience and a definite stress-adder. We’ll be back next year.

But seriously, until then, bye Vegas.