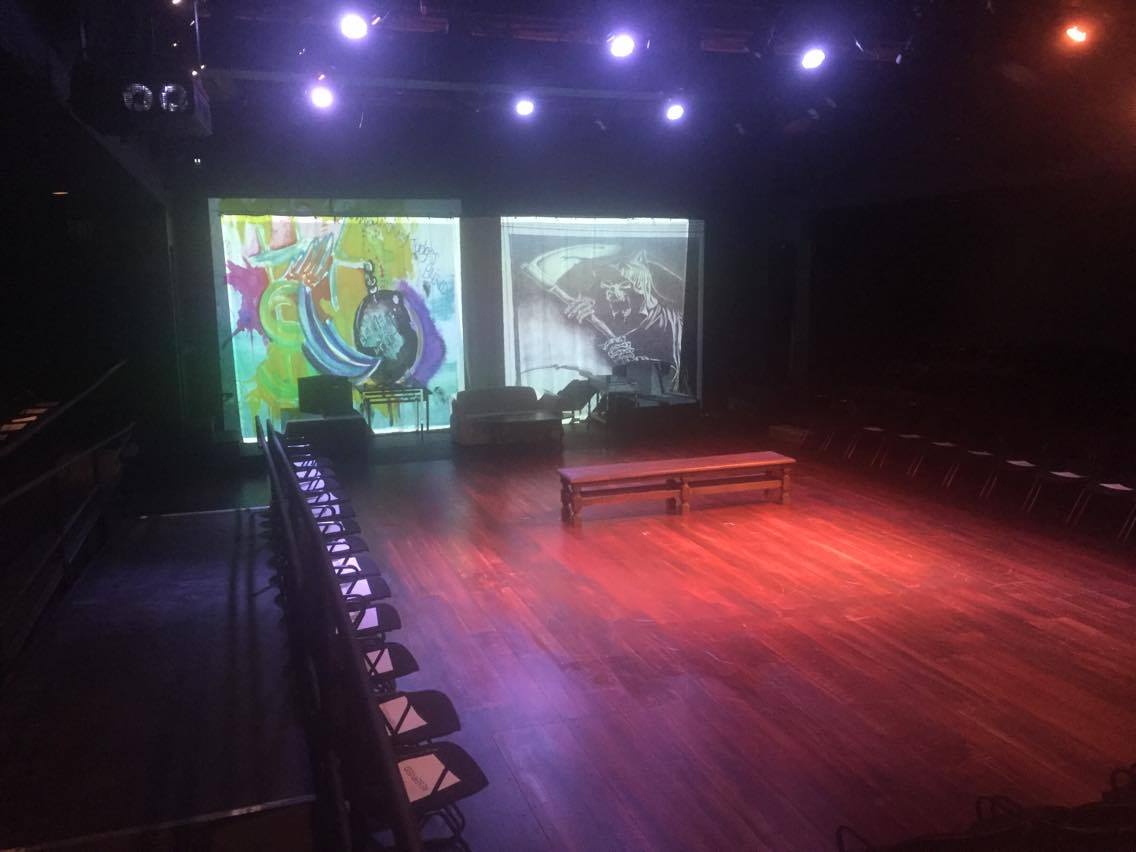 The San Diego State theater department recently teamed up with Playwrights Project to stage “Living with Hope” in SDSU’s experimental theater from March 16-19. The performance consisted of two short plays: Mabelle Reynoso’s “Other People’s Kids” followed by Out of the Yard Playwrights’ “Finding Our Way.” Both plays centered on the cycle and struggles of addiction.

The first play was prefaced by a series of abstract and disturbing images, such as a detailed drawing of the Grim Reaper, projected onto the stage’s backdrop. The images were adorned with provoking phrases like, “Just another hit… euphoria setting in… lifeless here I die,” and “I did things no girl should dare.” “Other People’s Kids” featured interconnected stories related to meth use. Destiny Girley and Nick Sandoval played Gaby and Jesse, a young couple expecting a child. Gaby is an ex-meth user while Jesse is still using and selling, which leads to abusive behavior toward Gaby. Gaby attempts to get her life together for their child, and ultimately their breakup. Jake and Gaby’s story realistically displayed the pitfalls and manipulation that come from meth use and abusive relationships.

Alex DeMarco played Patty, mother to Brown University-bound teen daughter Mackenzie, played by Paige Jensen. Mackenzie, while an exceptional student, is a social outcast due to her fierce academic dedication. She turns to drugs looking for a feeling of normalcy. Obtaining meth through Jesse, she sacrifices her health and college plans because of the drugs, much to Patty’s dismay. Mackenzie’s story ends somewhat unresolved, as it remains unknown if she recovers from her addiction. However, amidst Patty’s disgust at what her daughter has become, she realizes that Mackenzie is still human and is suffering from a disease. The ambiguity of Mackenzie’s character arc reflects the uncertainties faced by addicts’ families – will she recover? Will she die? Will she spend her entire life on the streets? Mackenzie and Patty’s relationship was a heartbreaking and accurate display of the struggle to keep hope alive when parenting an addict.

“Finding Our Way” began immediately after the final scene of “Other People’s Kids” and was a much more abstract look at addiction. The play featured several reenactments of the characters’ first time using various drugs due to peer pressure, low self-esteem and curiosity. The most powerful scene was when a mother came home with a man, both clearly intoxicated, and proceeded to fight right in front of her daughter while three other characters attempted to shield the daughters’ eyes.

“Finding Our Way” stressed that there are better ways to treat addicts than incarceration, such as rehabilitation centers, therapy and meditation. The play stood firmly against jail time for drug-users, since those laws affect the families of addicts arguably more so than the addicts themselves.

The play additionally featured “addiction” personified, who goaded the other characters into doing drugs to attempt to catch the feelings they constantly chase. The characters would fall at the touch of the “addiction” character, depicting the immense power addiction has over their lives.

The performance as a whole portrayed addiction in two wildly different ways. “Other People’s Kids” presented the many lifestyles of drug addicts, emphasizing that drugs can find anyone. “Finding Our Way” offered a look into the addicts’ minds, and the options available and steps necessary to reach recovery. “Living with Hope” treated addiction effectively and realistically, and avoided going over the audience’s heads by being preachy or cheesy, as is often true of performances about drug addiction. The show was especially powerful and relevant to students, but the stories, as “Living with Hope” stressed, could relate to anyone.