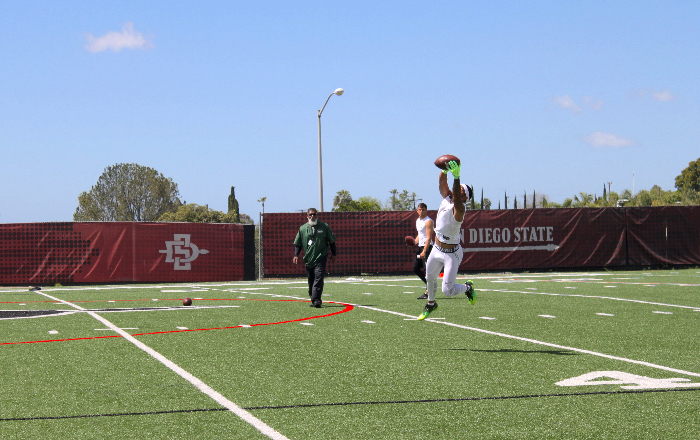 Well, the 2017 NFL draft is finally over. With first round surprises and picks that we all knew were going to happen, the fourth and fifth round is where the Aztecs made their presence known.

Three major aspects of the 2016-2017 San Diego State football team were taken in the two rounds. But how will they fair in their newly acquired home town?

I’m here to give you my thoughts on what the future is going to be like for the Aztecs that finally made it to the big league.

Nico Siragusa to the Baltimore Ravens

This was a pick that any SDSU football native could have seen coming. A big body Siragusa helped in paving the way for the all-time collegiate rusher in Donnel Pumphrey, so it was to no surprise that he was going to find a home in a city that loved linemen.

In the past, the Ravens have had star linemen such as Jonathan Ogden, Marshall Yanda and Michael Oher, just to name a few. I believe that Siragusa is going to make a major impact in the Ravens running game with Justin Forsett in the backfield. Overall I think that this is a good home for Siragusa and I would give this draft grade a solid A-.

Donnel Pumphrey to the Philadelphia Eagles

Man oh man do I have a lot to say about this acquisition. With the 132nd pick, the Eagles took a chance and traded up to get the 5’8”, 178 pound Pumphrey who in 2017, surpassed the great Ron Dayne in rushing yards. As a Cowboys fan, this draft pick hurt me dearly.

I was not expecting the Eagles to trade up to take Pumphrey, but as far as a system that works for his skillset, Phili does show some promise.

Of course, the Eagles houses one of the elite short-man running backs in Darren Sproles who is in fact two inches shorter than Pumphrey. I think with the mentorship that Sproles can bring, along with a promising backfield with Ryan Mathews and Wendell Smallwood, the leading rusher the chance to make a decent impact with this club. I would give this a draft grade of a B+.

Damontae Kazee to the Atlanta Falcons

This pick, in my opinion, was the smartest out of all of the three draft picks. With the 149th pick, the Falcons made a very smart move on taking the senior cornerback Damontae Kazee.

Prior to the draft, I had Kazee going as the first Aztec in the draft, but still going to the Falcons. Last season, the Falcons were that one star defensive back away from having an elite defense. Paired with Desmond Trufant, I feel like Kazee is going to be able to make the roster and make an immediate impact for the Falcon’s defense.

Defensive coordinator Marquand Manuel is going to have a great time with this defense with star studded players like Vic Beasley Jr., Keanu Neal, Courtney Upshaw, and of course, Kazee. I give this an amazing draft grade of A+.