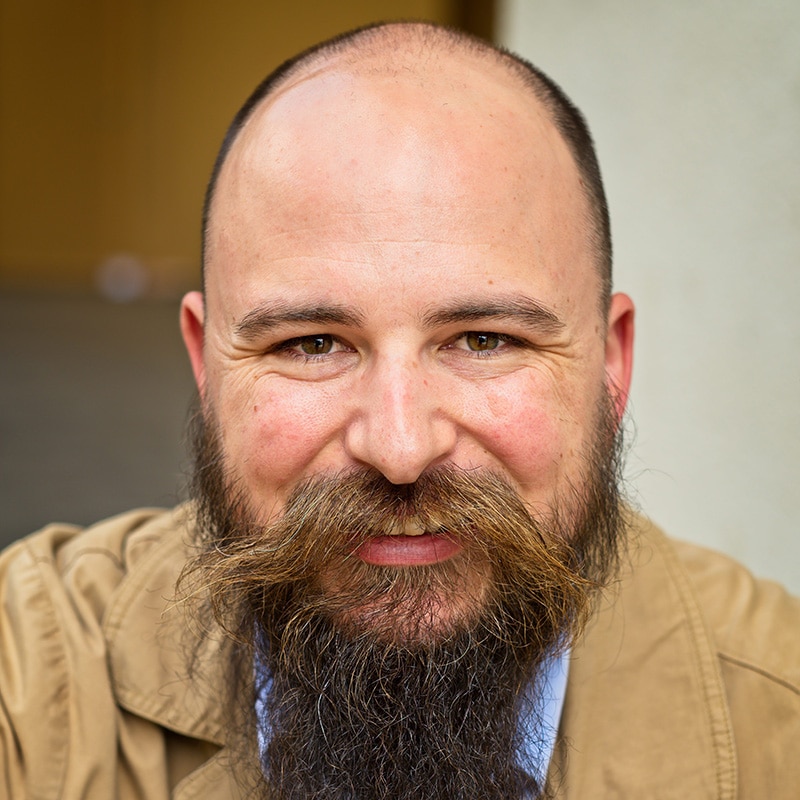 Thorn began his career as a broadcaster on UC Santa Cruz’s college radio station, KZSC. On KZSC Thorn hosted “Sound of Young America” with his friend Jordan Morris. “Sound of Young America” eventually morphed into “Bullseye with Jesse Thorn” which is distributed by National Public Radio. On “Bullseye,” Thorn has had the opportunity to interview some of the greatest creative minds pop culture has had to offer including: Lin-Manuel Miranda, John Waters, and Chris Rock.

On top of hosting, Thorn is also the founder and owner of MaximumFun.org, one of the first ever podcasting networks. Alongside Jesse’s own projects, “Bullseye” and “Jordan, Jesse, Go,” MaxFun also produces shows such as “The Adventure Zone,” “Heat Rocks,” and “One Bad Mother.”

Thorn currently resides in Los Angeles with his wife, the equally talented author and host Theresa Thorn, and family. He was kind enough to conduct an interview with KCR via email, the transcript of which can be found below:

You grew up in San Francisco and have lived much of your professional life in Los Angeles. How do you think these two places have shaped your creative process? Growing up who were the people you took inspiration from?

I heard the director Marielle Heller the other day explaining why growing up in the Bay was important to her. To boil it down: she always felt like the expectation was that she would be different. Not just that difference would be tolerated, but expected. I feel really strongly that growing up in San Francisco made me feel like I had full permission to do something interesting, and in fact if I failed to do so, it would be a disappointment.
Los Angeles, well… that’s where the entertainment industry is. It’s wild to think that I could be out to dinner with four different comedy geniuses every week. Of course, like most Angelenos, I don’t ever leave the house.
As far as people I took inspiration from – my parents, obviously. Both of them went to graduate school when I was a kid, neither of them had any problem with doing important work even if it meant not making much money. Both are totally brilliant geniuses who transcended abusive homes.

You began your broadcasting career while attending the University of California, Santa Cruz. Can you tell me what your experience at KZSC was like and what compelled you to join? What skills did you learn in college broadcasting that you took with you into your professional career?

KZSC was and still is an incredible place. It’s a real radio station – with a pretty big transmitter that covers a lot of people. So if you do a good job, there are actually people listening. It’s also deeply dedicated to diversity of all kinds. There were four or five different types of reggae shows. I didn’t get a lot of training there, but they really let us do whatever we wanted, and that was a real thrill.

Jordan Morris has been your collaborator since you were both at UCSC. How has your creative partnership evolved over the years and what do you believe is the secret to the chemistry between you and Morris?

Jordan is a genius. I mean, he is a real genius. He’s the funniest guy I’ve ever known, and I’ve known a lot of really funny people. He’s also a very committed good dude. In a lot of ways, he and I are very different, but I think what’s held us together is that we are the kinds of guys who show up and take care of business. So I know I can rely on him being there and doing his best and vice-versa. We’re also both profoundly conflict avoidant in very different but oddly complimentary ways. That helps, too.

I know you taught a radio course at UCSC for awhile. What were some of the skills that you tried to impart to your students?

The journalism program was being shut down, and there was no radio or broadcasting program, so it was really the most basic basics. Ones I’d essentially taught myself. I used the This American Life comic book as a text, and just taught people how to gather tape, the basics of writing for radio, and got them on air every week. I was only a few months ahead of them in my own radio experience, so we just did what we could.

You’ve interviewed some of the greatest minds of pop culture through your show, Bullseye. Which guest has impressed you the most and why?

There’s a thousand ways I could answer this, but I’ll go with recently: Rosie Perez. I didn’t know her life story until I booked her on the show – I just loved her work. She grew up in a group home and an orphanage and went through incredible challenges as a child. But she’s so irrepressibly brilliant you can’t imagine she’d be anything other than a great artist. Her passion is so deep and clear.

What was the original vision behind Maximum Fun? Was it difficult making the transition from radio personality to owner of a company?

The original vision was “Jesse doesn’t get another secretary job when he moves to Los Angeles.” Advertising was a zero at the time in podcasting, so I thought I’d build it like a public radio station or a non-profit. Every day it is immensely hard for me. Running a business isn’t necessarily my personality type. But I do what I can because I actually do believe in it.

Why did you make the decision to make MaxFun listener supported rather than relying exclusively on advertising revenue?

As I mentioned, in 2007 there was almost no ad money in podcasting. Besides that, I didn’t want to be making phone calls trying to sell ads.  So if I was going to do it for a living, I had to find another way. My dad worked in non-profits and organizing his whole life, and my roots were in community and public radio, so member-supported always made sense to me.

You have another life as a men’s fashion blogger on your site, putthison.com. What is the source of your passion for menswear and what can the average college student do improve their wardrobe?

It’s always been something I’ve loved. When the internet hit, it was something I could share with other people, both as a learner and a teacher. It started as a video project, and the blog took off immediately, so I kept it up.
As far as what a college student can do – I’d say simplify. Don’t get involved in the churn of fast fashion. Buy simple stuff – good jeans, good chinos, good t-shirts, some good oxford shirts – that fits you. And build the rest very slowly over time.

What are you currently watching, reading, and listening to?

I just started watching The Mandalorian. It’s a blast. I’ve been watching Fleabag, which is amazing. I’m really excited about the return of Joe Pera Talks to You, which is a really special show. Lately I’ve been listening to a lot of 70s New York salsa music – Fania Records stuff. And classic country music, I really love George Jones and I just got to interview Tanya Tucker. I’m reading the comic book Black Hammer, and The Power Broker when I’m feeling more serious.

What advice do you have for young people interested in new media?

Make something, take a look at it, think about how it could be better, go again.

You’re a proponent of something called “New Sincerity.” Can you explain what that is and how it relates to the world we presently live in?

It was a sort of philosophy made up as a goof when I was in college. Named by a friend who was frustrated she could never tell if I was joking. The basic principle is a rejection of irony as a lifestyle that still allows for an embrace of the grand and ridiculous. Dolly Parton is a great example.
Obama was Old Sincerity. Trump might be New Sincerity, though I can’t say he was what I was thinking of when I made it up.

You’re the co-host (or should I say, Bailiff) on Judge John Hodgman. How did your relationship with Hodgman begin, who first had the idea to lay down “internet justice,” and what is your favorite case thus far?

I interviewed Hodgman about his first book, before he was on TV, and we hit it off. I just thought he’d be some McSweeney’s guy (which would have been fine), but he really blew me away. And he liked me! Then he got famous, somewhat unexpectedly, but we maintained our relationship.
When I started doing Jordan Jesse Go years ago, we had Hodgman come on for fake court segments about real stuff. I think the first might have been about whether chili was a soup (it’s a stew). It was his idea to turn it into a stand-alone show. He’s the main creative force behind it, I’m sort of like an executive producer, and Jennifer Marmor runs it on a day-to-day basis.
I think a lot about the Bat Brothers, two guys in Kansas who bought a house to save money (which is a thing in Kansas, I guess). The bathroom had a hole in the wall, and bats were getting in. One brother wanted to patch the hole. The other brother thought that was too expensive, and wanted to put a phone book by the toilet so you could smash the bats if they bothered you. It was wild.

What has been your favorite fan interaction while touring?

I really like meeting kids. These sweet little precocious dorkwads who are sometimes kind of shaking and they stick their hand out to meet you, it’s amazing. My own kids have mixed feelings about me ;).

You have pursued a creatively rewarding, yet unorthodox career while also raising a family. How do you balance those two things while being true to yourself?

It’s really hard. I have an amazing partner, my wife Theresa. We’ve been together for more than 20 years, over half our lives. That helps. But every day it’s really hard. You just kind of muddle through.

Thank you once again to Jesse Thorn for his time and generosity. Be sure to visit MaximumFun.org and listen to Judge John Hodgman, Jordan, Jesse, Go and of course, Bullseye with Jesse Thorn.